One gap that's not closing 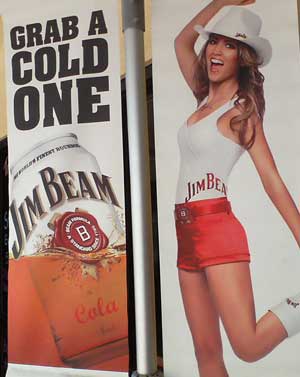 PLAYERS IN THE ABORIGINAL INDUSTRY

Some people continue to blame the “Aboriginal industry” for the failure of billions of dollars spent on “Closing the Gap,” but very few acknowledge the alcohol industry as one of the chief players.

It’s in their interest to maintain this constituency, while the NT government’s Alcohol Mandatory Treatment (AMT) is estimated to cost $43,000 person (AAP, 16/1/14).  206 people have been referred since the program began late last year at a cost of about $9m to taxpayers.

On top of a national alcohol abuse bill of $15b pa, an estimated $15m pa per person disability pension is required for children born with alcohol-induced disorders (FASD).

After the controversial and expensive dismantling of the Banned Drinkers Register, the question must be asked why a floor price cannot be introduced. A floor price makes economic sense and complements existing NTG alcohol policy without added cost.

HIT HEAVY DRINKERS IN THE POCKET

The British Medical Journal (8/1/14) in an article about the effectiveness of a minimum unit of alcohol or floor price, notes “the mean weekly alcohol consumption of patients with alcoholic cirrhosis is around 15 bottles of white wine or five bottles of vodka, 20 litres of super strong lager, or 20 litres of strong white cider brewed from fructose syrup.

A minimum price of 50 pence per unit of alcohol would mean that a 700 ml bottle of vodka with a typical alcohol content of 40% would cost at least £14, making it difficult for the heaviest drinkers to maintain their alcohol consumption without substantially increasing their expenditure.

“According to the OECD alcohol misuse currently costs the UK 2-3% of gross domestic product; this equates to around £12 a week for each of the 60 million or so UK inhabitants, of which £3 comes back from the drinks industry in taxes.

Moderate drinkers and non-drinkers in the UK are effectively subsidising heavy drinkers to the tune of around £9 a week.

“In Canada, where they have had minimum unit pricing for years, a 10% increase in the minimum price resulted in a 32% decrease in directly attributable alcohol related mortality.

Rob Moodie, professor of public health at the University of Melbourne (The Age, 6/1/14) warns that the Trans Pacific Partnership (TPP) agreement which has 12 signature countries, including Australia, Japan and the US, representing about 40 per cent of the global economy, could be a threat to the well-being of these nations.

“This success has been noticed and over the past decade alcohol and ultra-processed food and drink companies have been emulating these very same tactics.”

SHOCKWAVES IN THE GROG TRADE

Coca Cola Amatil has declared that its “expansion into the alcohol business and 10 year deal to distribute Jim Beam bourbon and other spirit brands in Australia is safe after Japanese liquor giant Suntory sent shockwaves through the global spirits market with its $US13.6b ($A15b) takeover of US spirits maker Beam.

Suntory will jump from #15 in global liquor sales to #3 behind only British-based Diageo and France’s Pernod Ricard, owner of Australian wine export champion Jacob’s Creek” (The Australian (15/1/14).