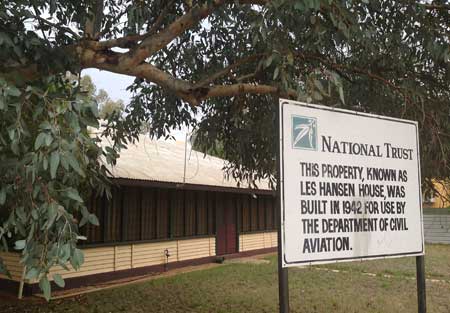 The historic Les Hansen House, built in 1942 on a large block corner Bath Street and Stuart Terrace, may be sold by the National Trust.

The Darwin-based CEO of the trust, Elisabeth Close, says the sale is being “discussed” because the trust has not been able to lease the property, it can’t find a tenant and it is very expensive to maintain it.

Ms Close says more information will be made public soon and declines to make further comment.

The trust owns another historic building that is standing empty, in 86 Hartley Street, as well as the Stuart Town Gaol alongside the court house, and is leasing part of the Hartley Street School from the Town Council.

Heritage listing of buildings requires whomever owns them to comply with the requirements of the listing.

Monte’s restaurant is an example – privately owned but maintained as an historical building.

The possible sale of Les Hansen House has triggered comments from heritage architect Domenico Pecorari, a member of “the town’s other heritage organisation,” Heritage Alice Springs.

He says the local branch of the trust, of which he was a member at the time, in around 2001 spent more than $20,000 of its meagre savings restoring Les Hansen House to a state where it could be rented out at $20,000 a year, earning $80,000 over four years for the trust. A string of government grants over the years have also been used for the building, according to a trust councillor.

Mr Pecorari says any sale would “show the mismanagement of the property by the trust”:

“They sucked it dry, not spending the money the building earned for the upkeep of the building, which had been given to them by the NT Government fully restored, at substantial cost to the government.

“The property was given to them in trust, and they did not maintain it.

“It seems sale proceeds of this Alice Springs property would go into the general revenue of the trust, to wages and so on, of this Darwin-based operation.”

The building was used for “successors in office” – tied to a job, initially the civil aviation manager in Alice Springs.

In 1978 it was transferred to the Housing Commission, headed up by Les Hansen for five consecutive terms.

The house has a central core of five rooms with a verandah almost all around the perimeter, and outbuildings – garage, laundry and toilet.