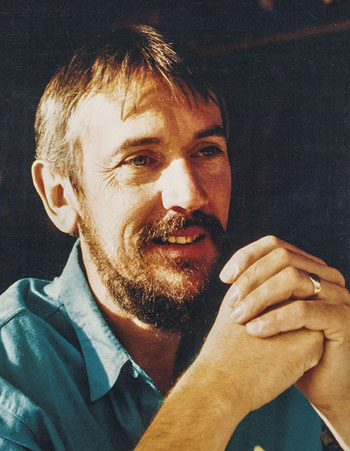 Max Kleiner (pictured) was a highly respected business man, a sportsman, a socialiser, a contributor to society, and importantly, a great family man.

He was born in 1946 in Switzerland and lobbed into Alice Springs in 1975. By 1976 he was running Asprint and continued to do so until health issues finally forced him to retire and sell the business.

Max was known for the quality of his work and generosity.
Hermann Weber, a past president, sent a message that he was shattered at the news of Max’s passing and noted Max printed the labels for the bottles of his vintage wines.

This was possibly a case of the labels being of higher quality than the contents.

A source of pride for Max was that he printed the Henley on Todd souvenir program, the Sandy Mariner, for many years, 5000 copies of each edition.

Max “press-ganged” advertisers and provided the programs at no cost to Henley on Todd. Production costs exceed advertising revenues but the losses were absorbed by Asprint, making that company a significant sponsor of the event.

Max no doubt almost bankrupted his Asprint business doing freebies for the Rotary Club of Stuart, of which he was a member for decades.

We know that Max was involved in a variety of sports.  For a period he was with Maureen his first partner, an equestrian, but was not selected for the Olympics.

He and friend Erwin Chlanda participated in extreme sports: Max flew gliders and Erwin skydived. (I politely refused to participate in either activity).

Rumour has it Max once didn’t make it back to the Bond Springs airstrip and landed on the Stuart Highway.

He rode in the Finke Desert Race. I did see him finish one year, it was a question whether Max or the bike was more clapped out.

Max played squash and was also a member of the Running Club with then partner Jill. He was always out of sight before I covered 100 metres.

Madness then set in and he became a member of the golf club, playing until recently.

Max was quietly spoken but was not afraid to express an opinion. He was often late for Rotary meetings but usually got there before Brendan Heenan. He had the ability to put visitors and new members at ease.

Max sponsored one of our first female members. Our current president, Fran Neylon, recalled that Max spoke to her after her induction into the club and explained “this is how we do things here”.

Max was the shot-firer at Henley on Todd and became a Henley Hero.

For years he was using a big, black canon mounted on the bow of the Pistill Dawn. The “ammunition” was made from beer cans, dozens of them prepared by Max (subsequent to these being emptied by him and mates), filled with shredded paper which was propelled into the arena with a bang from a cracker set off via a fuse.

This was how all the races were started, enhancing the spectacle. It went on until some bureaucrat decided all this was against some regulation about explosives. Max’s role then was reduced to using a very mundane starter’s pistol.

He did have one of those moments when a visiting exchange student said she could not understand a word of his Swiss German; the conversation reverted to English.

Max turned up for all sorts of service jobs, and never missed a social function if he could help it. He avoided formal speeches and dodged presidency of the Stuart Rotary Club.

Irritation was only shown annually when tardy directors were late with their annual reports which Max printed FOC for the club, complete with spelling and grammatical errors as – he stressed – he was a printer not an editor.

Max was a devoted Collingwood supporter. He probably has never played or fully understood the game, but does recognize quality when he sees it.

Max also printed in book form a series of scurrilous essays of the history of the club, the author of which being nameless. The club awarded Max a Paul Harris Fellow and later a sapphire pin to go with it, both thoroughly deserved.

While he was a busy man Max had time for family.
When Max met Debra he struck a happy and lasting relationship with her.

At first, when putting down his name for a social function, he listed the accompanying person as “plus one”.  Being the sensitive lot that we are in the Stuart club, Debra became known as “Plus one”.

When Deb, who provides financial services, and Max got married she took great delight in letting all and sundry know, and particularly me, that “plus one” was no longer.

His discreet and private nature is illustrated by an anecdote from Patrick and Nicholas, sons from his marriage with Jill.

Early during his courtship of Debra, Max would tell them, repeatedly, that he had to go to a meeting with his accountant – in the late afternoon.

We wondered why he wasn’t coming back till the morning, the sons told the funeral service yesterday – a celebration of a life which enhanced this town. It was attended by some 300 people at Olive Pink Gardens.

Max took great interest in his sons and later Deb’s daughter Kiani. I do know this was a happy unit, and our best wishes go out to all of them at this difficult time. His body will be cremated.