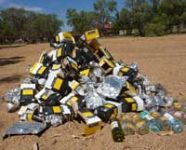 Sir, It is a sign of the extent of Dave Tollner’s incompetence that the Federal Minister for Indigenous Affairs Nigel Scullion has today intervened in Northern Territory affairs and announced a Federal Parliamentary Inquiry into how to tackle increasing rates of alcohol-fuelled violence.

In an embarrassing turn of events for the CLP, Senator Scullion has stepped in to inquire into alcohol when the CLP Government steadfastly failed to heed Opposition and Independent calls for an Inquiry by the Northern Territory Legislative Assembly.

This parliamentary inquiry should have been held by Territorians, instead Senator Scullion has orchestrated a Federal Intervention because the CLP have been so incompetent and overseen escalating rates of alcohol-fuelled violence and anti-social behaviour.

Yesterday the CLP Member for Daly Gary Higgins broke ranks with Adam Giles and Dave Tollner and called for a Territory Parliament Inquiry saying that ordering individual drunks into rehabilitation and banning them from drinking isn’t working and called for a bipartisan effort to tackle this worrying issue.

The Territory Minister for Alcohol Policy continued in his arrogant fashion, ignoring his own colleague and setting the Territory up for this Federal intervention.

Even Senator Scullion understands the tragedy of alcohol-fuelled violence deserves a comprehensive inquiry – at complete odds to the Territory CLP Government.”

Ms Lawrie said the Federal Government has the power to override the Territory Government’s alcohol policies because we are not a State.

Territorians should be able to decide the laws and alcohol management measures for controlling alcohol misuse in the Territory but the unacceptable behaviour of the Giles Government has now put this in real jeopardy.

The tragedy that is caused through alcohol-related violence and anti-social behaviour deserved a Territory parliament inquiry and due to the arrogance of Dave Tollner we’re now being overridden with a Federal inquiry.

I call on Minister Scullion to ensure Territory federal parliamentarians are given priority membership of the committee and that committee meetings and hearings are held in the Territory.

This is another damning day for CLP mismanagement.

Delia Lawrie
Leader of the Opposition

ED – The ABC is reporting that the inquiry will be wide-ranging and across all jurisdictions, not exclusive to the NT.