So much for the 'revitalisation' of Todd Mall 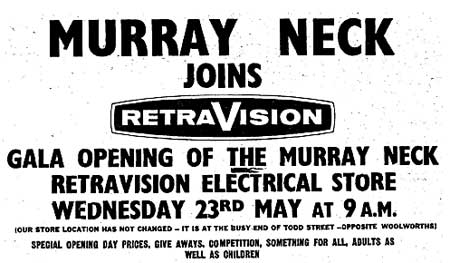 Sir – As the decline of the northern end of Todd Mall continues it’s instructive to look at newspaper advertising from 1968, namely the feature about Murray Neck’s joining Retravision that year.

Take a look at the line near the top of the first page (“Our store location has not changed – it is at the busy end of Todd Street – opposite Woolworths”), that is the northern end of then Todd Street.

Of course, we’ve just seen the closure (Christmas Eve) of Murray Neck Leading Edge in Alice Plaza, the last of the Murray Neck businesses (and nearby where the original Murray Neck’s used to be).

It came three years ahead of schedule, according to Chris Neck on ABC radio late last year.  The decline in business had been so rapid during 2013 it forced their hand to close earlier than anticipated.

In addition we’ve got the impending closure of Dymocks (January 18) and – I’m told – Centre Souvenirs & Gifts is also shutting its doors.

Hmm, so much for the “revitalisation of the north end of Todd Mall”.

With NT Government offices also thinning out upstairs, one has to wonder what’s in store for the future of Alice Plaza?

But it’s not just there, as Yeperenye is losing a couple of tenants, too – A Home Like Alice & Travelbaggers (the latter one of the original tenants, I think).

Both businesses have been for sale but there are no takers, so the doors are closing. A trend, I think, that shows every likelihood of continuing.