‘Sculpture can be personal’ 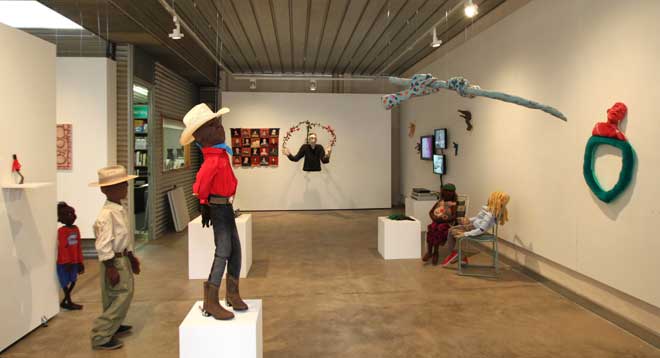 Sculptor Sia Cox’s exhibition Good Friends, recently shown at RAFT Artspace, was a wondrous survey of contemporary portraiture. A room of soft sculptures, in the form of puppets, figures and still life, celebrated the artist’s dearly held relationships with both family and friends.

It was impossible not to be drawn into the multitude of emotions expressed both plainly and subtly by this eclectic gathering of characters and in a peculiar, yet intimate way to, at least for a moment, become a part of their world. Perhaps it is the expectation we have as humans in the presence of puppets, that we suspend our concepts of ‘the living’ and project our very own lives into the still figures awaiting our touch. 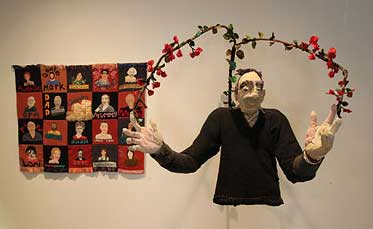 The exhibition’s centrepiece, You are what I miss most about home, was a joyous depiction of the artist’s grandfather. This beautifully realised life-sized sculpture is rendered so as to give us an impression of the man himself. Placed prominently with his long arms open, he appeared as a heroic figure, smiling patiently awaiting the embrace of his beloved granddaughter. This sculpture is a response to the feelings of separation Cox experiences living so far from a man she undoubtedly loves, an attempt perhaps to reconcile the sacrifice so many of us make while living in Central Australia away from family and old friends. 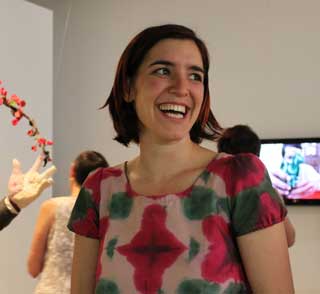 There is much sincerity in her pursuit, which flies in the face of faddish hyperrealist sculptors, such as Ron Mueck, who seem obsessed with plasticized re-creations of the human form with which to then commentate. The result often is scientific and in the attempt to deceive our eye our hearts are left yearning to connect with a deeper reflection of our selves. This is certainly not the case here. Cox seems set on not only illuminating her own connections, but provoking ours. As she states:

“When I love someone I’ll make things for them and about them. I’m thinking with my hands. I make work about people I admire, or love or am interested in. Making the work is a way of exploring who that person is. I spend so much time looking at them and thinking about them.”

The collection of two-thirds life-size puppets, many depicting Aboriginal people in strikingly familiar poses, was commissioned for use in an educational video. They subtly reveal an unfolding narrative of cautious love. A lean cowboy stands with one arm folded behind his back. His shy admirer sits nearby, watching his every move, while from behind a corner peers a small boy, complete with an outrageous Mohawk, so common amongst desert youth. 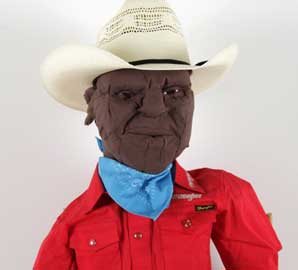 The vast majority of these characters have been inspired by Cox’s time living and working in Central Australia. Fresh after graduating from the National Art School in Sydney in 2009, she took a position in Aged Care at the Women’s Centre in Kintore (Walungurru). This experience resulted in an exhibition with Ruby Green, held in late 2010 at Watch this Space. Later, a move into Alice Springs coincided with a position becoming available at Tangentyere Artists as an art facilitatior and more recently she has taken a position as lecturer in Visual Art at the Bachelor Institute.

More recent work includes Serenade, a deceptively simple sculpture of unadorned foam, offering a beautifully gestural sketch of a reclining figure being courted by a guitar playing other (below left). From a block of foam offcut, Cox has chiseled and snipped a ‘romance in foam’. She is attracted to this comparatively quick technique and its ability to communicate with immediacy. This work and the others like it were all carved in front of naked models. Using simple recycled foam, she is relieved of the pressures of the material and can just work. 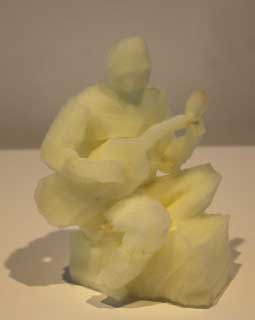 For most, soft sculpture occupies a unique space within the ever-expanding boundaries of Contemporary Art. Quite removed from the seriousness of painting or the often confounding obscurity of video, sculptures such as these are perhaps not so readily accepted as ‘high art’, a fact which rightfully carries little significance or consequence in Cox’s mind. While she is driven by a search for meaning, she maintains an equally strong desire not to be bound by it.

Her attempts to illuminate personal truths have provoked some rather unexpected reactions. For her graduating exhibition Cox constructed an intimate sculpture of a woman giving birth. So vivid was Cox’s presentation one assessor would go so far as to suggest the sculpture taboo. To Cox, and no doubt many others, this was preposterous and highlighted a problematic educational system obsessed with pure aesthetics and crass conceptualism. She freely admits that since graduating her practice has been a rebellion against the narrow focus and facile expectations of her education.

When I met with Cox to discuss Good Friends, she described her practice as “love craft”. There is undoubtedly craft in every piece, whether it be in the painstakingly stitched figures or the spontaneous life-like raw foam pieces. There is most certainly love here also, between the maker, her models and the varied materials used to forge them.

Three wall-mounted screens capture a montage of footage from all over the world showing a variety of Cox’s small puppets being controlled by the artist herself, friends and family.  The puppeteers are equally a part of the composition as the puppets and so we are invited to observe and admire both.

Earlier this year Cox and her partner Adrian Warburton, a filmmaker who collaborated on this work, were able to undertake an international art research tour supported by Cox’s patron Pam Usher, through a residency established for Cox at Tangentyere Artists. During their travels through Europe and Indonesia, their aim was to connect with people through art and the invitation to participate in this video project presented a wonderful opportunity to facilitate this. The result is eminently watchable, as one is drawn into the game of exactly who is controlling who.

The puppets and their variety of stages, spread across a collection of geographies and climates, reminds us that as humans we are connected to a great many others. Something not lost on this exciting local artist, who has presented us with a refreshing look at what it is to be human, all too human.

1. Luke Scholes has many years of experience behind him in the visual arts industry, including with Papunya Tula Artists and the National Gallery of Victoria.

2. Good Friends, together with a show of recent work by Wayne Eager, Marina Strocchi, Neridah Stockley and Patsy Morton, was the last exhibition for 2013 at Raft Artspace. Owner Dallas Gold will be reflecting over the summer break on where to from here. The paradigm of an exhibition a month is not sustainable in the current climate,  he says. So in 2014 Raft – in the spirit of its namesake, the extraordinary raft journey  across the Timor Sea by artist Ian Fairweather – will be entering uncharted waters. Let us hope that these waters will still flow in Alice Springs where Gold’s Raft has made such a rich contribution since arriving here in 2010. – Kieran Finnane