Above: Kieran Finnane accepting her award from Adelaide via a Skype connection. Below right: Watch This Space coordinator Alice Buscombe and chair Dan Murphy announcing the award. Photos: OLIVER ECLIPSE.

Alice Springs News Online arts writer Kieran Finnane is the recipient of the third annual award of The LOFTY, acknowledging “an individual who has made a significant and longstanding contribution to the creative culture of Alice Springs, by inspiring others, supporting their creative projects and helping to make it all happen in one way or another”.

The award was announced on Friday night by artist Dan Murphy, chair of the Watch This Space committee. WTS established the award in 2011 in honour of their founder, the late Pamela Lofts. 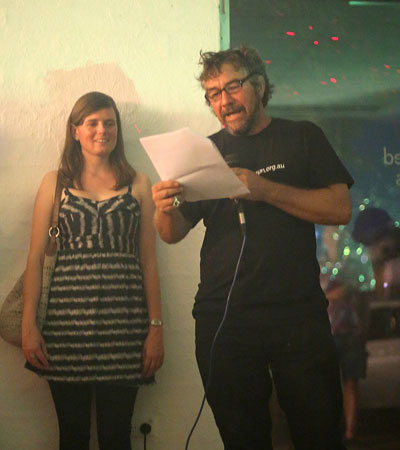 Murphy was one of this year’s judges, together with Stephen Williamson, Leo Ortega and Shrike O’Malley. In making the announcement he began by quoting from Craig San Roque’s nomination:

“Kieran Finnane … has, over more than 20 years, consistently written on, commented upon, encouraged and reviewed Central Australian arts events. Her work has been intelligent, culturally informed, critical and constructive, and by its very consistency has provided local artists with a much needed reflective mirror.

“Her quiet presence at events and her incisive, often fearless and also compassionate reviews have encouraged many of us, and offered critique of a high standard that we as local artists rarely experience. Her eulogy piece on Pam Lofts stands as a vital part of local history and testimony to Lofty.”

San Roque had noted the scope of Finnane’s writing – her own literary work as well as her arts journalism, “especially in the form of arts and cultural reviews pertaining to central Australian exhibitions, cultural events, festivals, performances, local architecture, and uses of town environments”.

This has not been limited to publication in the Alice Springs News. Finnane is a regular contributor to national arts journals such as Art Monthly and Artlink, drawing attention of a wider audience to work out of this region (for a list of recent contributions, see below).

Murphy referred to the strong support from the community for Finnane’s nomination and went on to read from what the judges had  to say:

“Overall it was felt that Kieran had the strongest claim of this year’s nominations. This is due to her direct contribution to WTS through writing about many exhibitions held there and inviting people into this community arts space by articulating the philosophy behind a community arts space, giving coverage to emerging as well as established artists, and giving serious meaning to art shown at WTS (and at other venues in Alice Springs) and opening up this dialogue with a broader audience through her articles online and formerly in printed form.

“Her reporting and documentation of cultural events in Alice Springs over a long period has produced a very valuable record of the richness of arts in this town, and through her own arts practice (poetry and prose) she has produced a body of work that is of and about this community.

“Kieran has honoured and confirmed WTS as a critical (and serious) cultural space in this town through her writing.”

Finnane accepted the award – a 1000 cash prize and the opportunity to have an exhibition at WTS – via a Skype connection (thanks to David Nixon) from Adelaide where she has been supporting her husband and Alice News editor Erwin Chlanda following his injury in a hit and run accident. She said she was honoured to take her place in a lineage with Pamela Lofts at its head and alongside previous LOFTY recipients Franca Barraclough in 2011 and David Nixon in 2012. Thanking San Roque, the judges, and Watch This Space, she also commented on the maturity and dynamism of the local creative community as reflected in the way it had accepted, indeed nurtured an independent critical voice.


For an archive of recent reviews in the Alice Springs News Online go to our Books & Arts menu button.


Finnane’s 2013 contributions in national journals include:

Rod Moss. Anatomy Lesson – You. Me. Us. Exhibition review in Art Monthly, October 2013.

‘Their share of the struggle’: innovation and experimentation in desert arts. Symposium report in Art Monthly, June 2013.