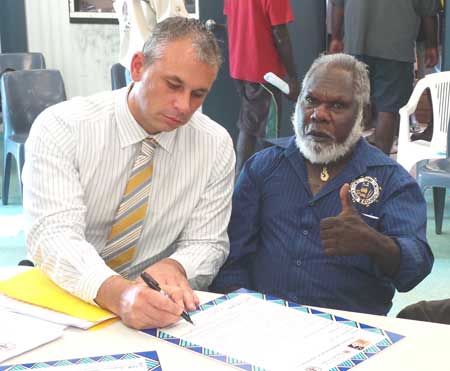 Sir – The Territory Government and the Tiwi Land Council have signed a Memorandum of Understanding recognising their shared vision for economic development and jobs on the Tiwi Islands.

This is the next step in creating an economic future for the Tiwi people and I commend members of the Tiwi Land Council for their leadership.

Mr Giles and the Member for Arafura Francis Xavier Kurrupuwu addressed a full meeting of the Tiwi Land Council at Wurrumiyanga yesterday before the MOU was signed.

The goal is to create jobs and break the cycle of welfare dependency that has held people back for so long.

Under this MoU, the Government and the Tiwi Land Council agree to work together to sustain a prosperous economy on the islands.

We have agreed to negotiate in good faith towards a Partnership Agreement that unlocks the potential of the Tiwi region.

Both sides want to encourage new investments and the growth of existing businesses, especially in the pastoral, agricultural, aquaculture and tourism sectors.

Over many years, the Tiwi people have shown their determination to take their economic future into their own hands by developing their own successful forestry operations, fishing and tourism businesses.

The Territory Government now wants to expand the possibilities open to the Tiwis by connecting them with investors interested in partnering with local people to create jobs.

Over the months ahead we will consult with members of the Tiwi Land Council about their attitude to long term land leases, as well as the kinds of industries they want to pursue on their country.

Contrary to the scaremongering from Labor on this issue, consultation with traditional owners through the Tiwi Land Council has begun and will continue.

The Tiwi Land Council is the only body legislated to act on behalf of Traditional Owners and they are facilitating all consultation and negotiations going forward.