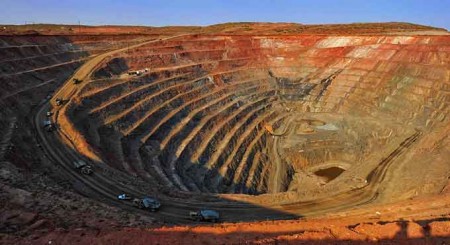 A suave moderator, Noel Jampintjinpa Heenan from Yuelamu, presenting in English, urges viewers: “Have your say on how you money is spent.” Elisabeth Ross voiced the Warlpiri version.

A few Toyotas hurtling through the bush and we’re at a different community in the Tanami Desert. There are nine of them in all with an interest in the Granite Mines Affected Areas Aboriginal Corporation (GMAAAC). The number of representatives in the group, occasionally represented in the video by stick figures,vary with the size of the community, ranging from Yuendumu (pop about 950) to Tanami Downs (just a few houses).

The launch screening is in the meeting room of the plush Central Land Council (CLC) building in Alice Springs.

The 17 minute video had actually already been shown at the Yuendumu Sports Day a few weeks earlier. It was the battle of the bush bands that got the rave reviews that night from the audience, but the video was a neatly put together and informative piece.

For PAW Media, the Yuendumu-based production company, it was a well-done addition to their portfolio over many years (they started as Warlpiri Media) which also includes involvement in Francis Kelly’s and Dave Batty’s Coniston and Bush Mechanics.

So what is the Granite Mines Affected Areas Aboriginal Corporation (GMAAAC)?

The Granite Mines, (above right) some 600 kms north-west of Alice Springs, are owned by Newmont, one of the world’s largest gold producers with significant assets or operations on five continents. The Granites employs some 600 people.

This is how it all hangs together (in a simplified version): Newmont mines on Aboriginal land > this obliges them to pay a royalty to the land owners (via the Australian Government) > no such obligation exists vis-a-vis non-Aboriginal land owners > the royalties are paid to GMAAAC > it’s about $3m a year > GMAAAC invests roughly half in businesses and real estate > it does so usually via Centrecorp in which the CLC has a three-fifths holding > GMAAAC’s accumulated funds at June 30, 2012 amounted to $26.8m > the CLC gets part of its operating costs from mining royalties > the CLC supports GMAAAC’s operations > these are mostly to decide who gets what from the royalty cake > no-one needs to lift a finger to get that money > it’s the law.

But hold on, isn’t there a missing link somewhere? Isn’t this just another variant of sit-down money becoming further institutionalized?

How about people in the affected areas getting a job at the mines, for example?

Isn’t that an issue at the heart of the barney that Adam Giles and Delia Lawrie are having right now, or Senator Nigel Scullion commented about in these pages: When will Aboriginal assets – including land – finally become a device for lifting Aborigines out of their misery?

I sat down with Norbert Jampijinpa Patrick after the video launch to explore these issues. He is a middle-aged man of tall and dignified bearing, chairman of GMAAAC as well as a councillor for Lajamanu on the Central Desert Shire and its former president.

How many Lajamanu people work at the Granites?

Three, he replies: one is an Aboriginal liaison officer, one a truck driver and one an exploration worker.

I had already found out from senior man Harry Nelson that no-one from the GMAAAC region’s other major Aboriginal town, Yuendumu, works at the Granites.

Would Mr Patrick like to see people from his community work there?

Why does he think not more people are working at the mine?

“Maybe because it is very remote. Sometimes there is a loneliness, too, when you are without your family.”

The mine would pick people up by plane, wouldn’t it?

“Plane, or they drive down to pick you up.”

How many people are unemployed in Lajamanu?

This was one question too many for the CLC’s principal gatekeeper, media officer Jane Hodson, who’d been hovering close to Mr Patrick and me during the interview.

“This is about GMAAAC, not about employment at Lajamanu. Let’s stick to GMAAAC,” she declared.

I asked Mr Patrick: “Are you happy to talk to me about unemployment?”

“I guess this is about GMAAAC,” he replied.

And so the question at the core of it all remained without an answer.  See above, as the circle neatly closes.