More than half of the Alice Springs population do not speak English as their first language. Rather they grew up speaking Arrernte, Pitjantjatjara and Warlpiri, or Malayalam, Mandarin and Punjabi. This is something I learnt this morning on the way to the post office, in an interesting public space exhibition about the changing face of Alice Springs.

Titled Face Alice, it cleverly plays on the word ‘face’ as both a noun and a verb: these are the faces of Alice and Alice needs to face its growing multi-culturalism. 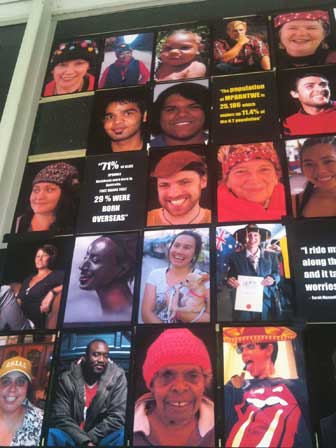 The human face is the most compelling of images and most passers-by I observed were arrested by the display on the façade of the old Commonwealth Bank building in Parsons Street, vacant now for a number of years. A by-product of the project is doing something with this often-vandalised blank wall, and so enriching the experience of this street.

An initiative of the Desert Knowledge Australia Leadership Program 2013, the emphasis is on the town’s diversity. You can see the evidence of it in the faces on display, just as you can if you keep your eyes open in the town’s most communal places, probably the supermarkets, the hospital and the library.

Diversity is not that well reflected in our civic organizations. For instance, there is (to the best of my knowledge) only one representative on the Town Council with English as a second language (that’s Cr Eli Melky whose first language is Arabic). Central Australia’s parliamentary representatives are at present more diverse, with two, Alison Anderson and Bess Price, of the five speaking Australian languages as their first language.

The exhibition includes a few – but wisely not too many – panels of text, some of them reflecting different ways that people experience this place: as an ancestral homeland (Arrernte Country, Mparntwe), a comfortable, comforting home (a place to ride a bicycle and forget your worries), a historic place (The Alice, Sunburnt Country), a destination (The Red Centre, The Heart of Australia). 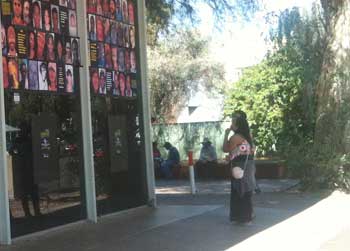 Most of the text though addresses facts about our diversity. Not surprisingly, with so many ESL speakers, quite a high proportion of the population was born overseas – 29%. There’s a long list of countries of origin other than Australia; suffice it to say they are from all corners of the globe, from right across Asia, the Americas, Europe, the Middle East, Africa.

Then of course there’s the significant proportion of Indigenous people – 18.6%.

Many people are wearing beanies, which, while it might not be particularly representative, is somehow endearing. Most faces are smiling. Someone is quoted in one panel as saying Alice is “the biggest small town in Australia”. Overall in this exhibition, it also looks like the happiest small town in Australia. The question as I walked away from this upbeat reflection on our town was, how to do we translate its spirit into everyday life as it is experienced in our public places, into our debates about the rules and regulations around them, about who is welcome where and doing what? 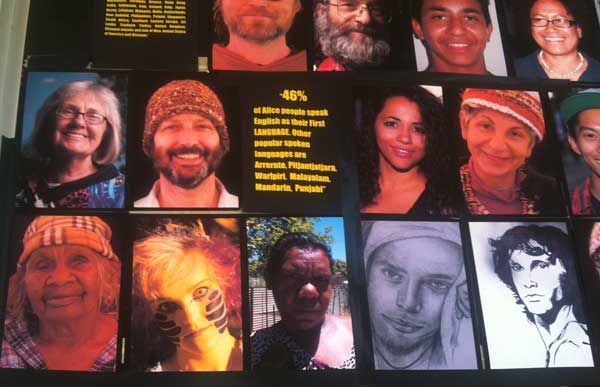