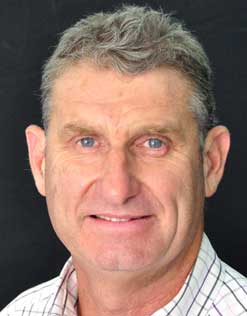 Council is a business and needs to run like a business, but every business has a heart and soul and in Alice Springs the heart and soul can be found in community events. Council should do its best, therefore, to look after and promote them. It already offers financial and in kind support but it could do more, says Town Council by-election candidate John Bridgefoot (pictured).

Something that may be worth considering is council hosting a marketing position supporting multiple events organised by different community groups. Mr Bridgefoot has strong links to some of them: he’s the Commodore of Henley-on-Todd (the equivalent of chair of the board); chair of Red Hot Arts Central Australia, organiser of the Alice Desert Festival; a past president of Totem Theatre; and a member of a number of automotive sports clubs.

These interests inform his approach to a trigger issue in any Alice Springs election campaign, what to do about anti-social behavior. His answer: an active, engaged community. “Coming down the heavy” with by-laws, for example, only makes it happen more, he says. More things for people to do in the town’s public spaces will counteract boredom and the opportunity for anti-social behavior: “If there are lots of people around, things for them to do and see, there’s less crime.”

Skating in the mall is a good example. He’s “100%” behind the trial. He’s not convinced that the trial area is the best place – particularly from the point of view of skater safety, given the glass windows in proximity – but the trial should give the information council needs to make a good longer term decision. Whatever the outcome, he’s also in favour of exploring an alternative area for skating at Snow Kenna Park, as recently suggested in council.

And he goes further: he’d like to see the mall opened up to cyclists, not 24/7 but, for instance, on non-market days after 4pm and perhaps also early in the morning.

“We want more people in the mall. I’d like to see shops open till 10pm, people strolling there of an evening. Council can’t do all this but it can help provide the right environment for it to happen.”

What about the thornier anti-social behaviour issues such as public drinking and drunkenness? (Council’s community survey showed the following as the top five areas respondents wanted council to focus on: recycling, antisocial behaviour, alcohol awareness, keeping the town clean, and by-law enforcement.)

Says Mr Bridgefoot: “If drinking in public is a problem in a particular area, then make alcohol less easy to get in that area.”

He recognizes this as a “hugely contentious issue” and beyond council’s jurisdiction but council has a role in taking the community’s views to the NT Government, and lobbying for action. “Councillors need to listen to what people want and be the conduit for their views” to the appropriate level of government.

Another issue close to his heart is road safety. He owns a driving school and has previously been on the Road Safety Council for 12 years.

Council has a big part to play in road design, he says. It has made some “silly mistakes” in the past and needs a sensible head to guide it. Examples? Median strips in the wrong places, leaving cars not enough “wriggle room”; poorly designed intersections, such as that of Gap Road and Stuart Terrace, opposite the Memo Club.

Council candidate has a focus on young people