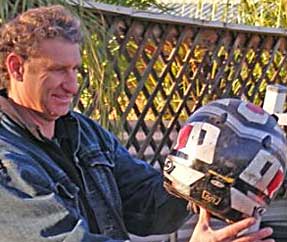 John Bridgefoot, a candidate for the town council by-election this month has had a restraining order made against him and was convicted for breaching it.
The order was taken out in June, 2003 by his partner of three and a half years, and was lifted in November 2005.
Mr Bridgefoot (pictured) says there was no violence involved.
The breach consisted in sending presents to his partner’s two children, aged 9 and 15 at the time of separation, sending an SMS to his former partner, and taking from her home three planting pots worth $120.
The penalty was a seven day suspended sentence with a two year good behaviour bond.
Mr Bridgefoot says he thought the pots were his.
“I should not have taken them. This has muddied my name,” he says.
The by-election to replace former Alice Springs Town Councillor Geoff Booth will be held on Saturday, November 23.
PHOTO: Penelope Bergen, ABC Local.