Riot in the shadow of Ayers Rock 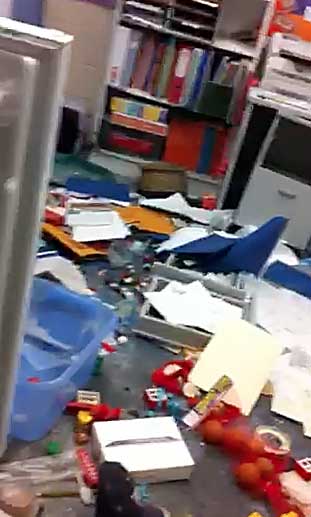 The school was trashed and community staff were in fear of their lives when a sports weekend at Mutitjulu turned into mayhem that lasted till Wednesday last week.

A local worker speaking on the condition of not being named says the population of 300 swelled to 800, many of them drinking alcohol, taking drugs and sniffing petrol.

The mob was making violent threats to locals, demanding money.

The worker in the community at the base of Ayers Rock (Uluru) says police reinforcements were pulled out after the weekend, after which the rampage escalated.

The damage to the school (pictured) occurred on Tuesday night. The damage is estimated between $100,000 and $200,000. Furniture and computer equipment were trashed.

The worker says the visitors to the football and softball carnival came from Territory, WA and South Australian communities.

The worker says the community employees were stretched to their limits, are still frightened, and many are now thinking about leaving.

Alice Springs detectives are investigating two incidents which occurred in Mutitjulu on the night of 28 October.

It is alleged a group of male youths aged between six and 13, unlawfully entered the school causing a significant amount of damage. It is believed the youths damaged windows to gain access to a classroom.

Once inside it appears they have smashed a number of computers, electrical items as well as tables and books. It is believed a fire extinguisher was discharged within the room, as well as a quantity of red paint thrown around. Another classroom was also entered and damaged in a similar manner.

It is alleged the same group unlawfully entered the respite centre next door and stole a quantity of food and other items. It is believed the group caused approximately $100,000 worth of damage.

Four youths have been dealt with by way of youth diversion. One youth was released back into the care of his parents and the other two, believed to have been involved, have returned to their interstate homes.

There are two officers stationed at Mutitjulu and three officers at the nearby community of Yulara.
There has been no request for reinforcements or information suggesting there has been unrest in the community with the exception of the school incident.