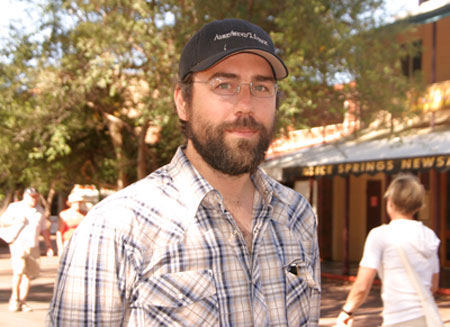 Local IT entrepreneur Edan Baxter has thrown his cap into the ring for the upcoming Town Council by-election. He’s definitely keen as he was a candidate in the last full council election, when the photo (left) was taken, and also in the last NT Legislative Assembly campaign.

He says he intends to bring a common-sense approach to council decision-making. This includes ensuring the basic-business-of -Council is well managed by:

• sustainable budgeting in the first instance and the growth-rate of council rates or fines increased only as a measure of last resort; and,

He says he is also interested in working within the Council’s committee process to promote the development of a National Broadband Network (NBN) strategy for Alice Springs.

“I believe that the NBN is a huge opportunity for Alice Springs and the surrounding region”, he says.

“Since the Overland Telegraph Line, Alice Springs has been at the forefront of Australian telecommunications and technological innovation. If elected I would seek to be a voice on Council that pushes for the best NBN outcomes for Alice Springs residents.

“In addition to the multilateral engagement of Territory and Federal Governments, Council can do a number of things to ensure that NBN related industries and opportunities are fostered and supported at a local level.”

Mr Baxter runs a small IT business, is the President of 8CCC Community Radio, a member of the Alice Springs Postie Bike club and is enthusiastic about table-tennis, history and Australian folk music.

“I don’t have an alignment with a particular type of politics,” says Mr Baxter. “In my view Council should be about people getting together, considering views from the whole of community, conducting intelligent debate and then making balanced decisions.

“I look forward to contributing to the debate that occurs during election time. I want to hear what other candidates stand for and care about – and of course I’m keen to hear from townsfolk about the issues that matter to them.”