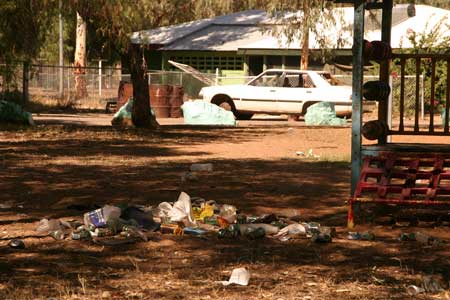 CORRECTION, September 15, 2014: This matter was dealt with in the Magistrates Court on February 27, 2014. The man charged pleaded guilty to ‘intimidation of a witness’. What he actually said was not made clear in open court. However, the Alice Springs News Online has recently been told by the man’s legal representative that, while his words were threatening, they did not included the “murderous” threat in English reported here. He was sentenced to six months, suspended after four, much of which he had already served, having been in custody since his arrest on October 30, 2013. Conditions were imposed for a 12 month period to prevent him from further interfering with the trial.

UPDATE, 1pm: A 44-year-old man has been charged today with “intimidation of a witness, make threats to kill a person and attempt to pervert the course of justice”, according to a police media release just to hand.

“I’m going to cut you, you’ll be dead”: these are the words I heard directed to a witness in the Alice Springs Magistrates Court yesterday, part way through the preliminary hearing of a murder charge against Sebastian Kunoth.

Right: Inside Abbott’s Camp where the alleged murder took place, photo from our archive (2008).

The words in English were part of a stream of speech in an Aboriginal language, uttered by a man as he was ejected from the courtroom. The same man had briefly disrupted the hearing earlier by taking a seat next to the accused at the bar table. The man appeared to be ‘under the influence’, needing to steady himself as he moved. When Magistrate David Bamber told him that that was not a place for the public to sit, he said “Sorry”, and referred to Mr Kunoth as “my son” (likely to be in the Aboriginal kinship sense).

The witness, Janet Wirri, did not visibly react to the apparent threat, but it brought the hearing to a standstill as prosecutor Stephen Geary sought to have the man arrested for intimidation of a witness. Mr Bamber said he was not sure of what was said. The police later took statements in relation to the matter.

Ms Wirri had almost reached the end of her evidence under cross-examination from Mr Kunoth’s defence lawyer, Tanya Collins.  In fact when the hearing resumed she was excused.

It was the second occasion of concern regarding possible interference as a witness gave evidence. Earlier in the day Christine Peterson had seemed very reluctant to adopt as “true stories” her statements given to police. She appeared worried and uncomfortable. There were mutterings and gesticulations from the gallery prompting Mr Bamber to speak to those present, telling them that they could not speak or gesture to the witness.

He asked Ms Collins if there was a reason for so many people to be present. She said they were members of her client’s family. Mr Geary asked for them to be removed. Mr Bamber enquired particularly about one man who had “plonked himself” next to her client. At this time Mr Kunoth was not at the bar table but sitting on the bench directly behind. Ms Collins spoke to the man and said that he could leave.

After he left Ms Peterson agreed that the first of her statements, made in town, “must be right”. The second, made at Papunya, seemed to worry her more but she did finally accept that it was true. She continued to appear anxious throughout her evidence.

After three days set down for this hearing the court has heard from just ten witnesses, six of whom were present at Abbott’s Camp “on or about” December 25 last year when the deceased, a young woman, R. Nelson, received the injuries from which she died a few days later. Thirteen out of eighteen witnesses were summonsed. Warrants have been issued for the arrest of those who have not appeared and Mr Bamber reluctantly has allowed a further day for the hearing – three was already a lot for a committal, he commented.

In fact the warrants were issued on day one, Monday, after just three witnesses appeared, only one of whom was present at Abbott’s Camp on the critical night. The fact that he is in custody might have helped with the timeliness of his appearance.

Police plans to pick people up for the next morning were interrupted by the discovery a woman’s body in the river (now being treated as a non-suspicious death following autopsy). Mr Geary, arguing for an extra day’s hearing “in the interests of justice”, said he believed the missing witnesses will be found – he has left police “in no doubt” of their importance. They include Lionel Minor, the “most important” witness from the defence point of view, he said. The hearing will continue on December 12.

The likely cause of Kumunjayi Nelson’s death was a fracture to the skull at the base of the brain. It was, in the opinion of forensic pathologist Terence Sinton, the result of a severe level of force (on the scale “mild, moderate, severe, extreme”).  It caused bleeding over the surface of the brain and contusion (bruising) at the front of the brain (opposite the site of impact). 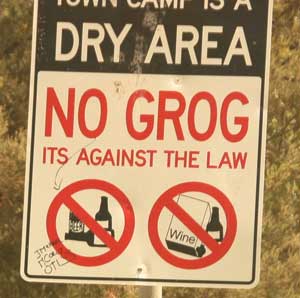 The picture emerging of the circumstances surrounding Kumunjayi Nelson’s ultimately fatal injuries is of a drunken party at Abbott’s Camp starting on Christmas Eve last year.

Left: People at Abbott’s Camp fought hard for it to be declared a dry area well before the Intervention which banned alcohol in all town camps. That didn’t seem to stop anyone on Christmas Eve 2012.

One man, Elwyn Brokus, gave evidence of starting the day at a pub (the “Peanut Bar”) with six schooners; that was followed by taking a 24-pack back to the camp to share with friends in the afternoon. Later, just before bottleshop closing time, he and a friend bought four 30 packs and a “four corner” (one litre bottle) of Jim Beam in readiness for the next day. He and the friend sat down to share one of the 30 packs that evening. He estimated that he drank half of it, 15 cans.

Later in the evening a big party got underway at House 4 – lots of people, men and women, dancing and music. Mr Brokus had left the party when he heard arguing. He recognised Sebastian Kunoth’s voice, speaking in Luritja, asking “Where’s Lionel, I want to see him?” Sebastian was wearing only shorts and was carrying a stick, according to Mr Brokus. Later Lionel told him he had had a fight with Sebastian. Mr Brokus knew the two men were “enemies”.

Stephen Morgan was at the party. He saw Kumunjayi Nelson there, dancing together with lots of other people. He was “full drunk from rum”, consumed earlier in the evening. At the party he topped up with a couple of VBs. He was standing in the kitchen, “dead drunk”.

Christine Peterson is Stephen Morgan’s wife. It was she who was worried about accepting her statements to police as “true stories”. She was at the party with her husband. She said she was drunk, having shared Jim Beam and beers with him. She gave evidence that Sebastian Kunoth “pushed” her husband, “just a little push”. She described Sebastian as “a little bit sober”.  He’d shared some beer and Jim Beam with them earlier. At the party he also pushed her “a little bit”, she said.

She said Sebastian got angry when he saw his partner dancing. He pulled her by the hair and she ran. He followed. She and Stephen left by another door. She saw Lionel Minor standing outside in the dark. Some time later, “little bit longer”, she heard girls sing out for her to call the police and ambulance.

Re-examined on her evidence by Mr Geary she said Kumunjayi ran from House 4 by herself, that Sebastian was still inside. Was he near Kumunjayi or away from Kumunjayi? “Must be long way, I was drunk too at that time.”

Neil Peterson had been drinking whisky, a “four corner Jim Beam” with his wife, Barbara Wheeler, starting at about 2pm. Later they went to the casino. On return they had another “four corner”. Was he quite drunk by the time it got dark? “Yeah, yeah.”

He saw Kumunjayi dancing at the party. He knows Lionel Minor but didn’t see him – “I was drunk”. He saw Sebastian Kunoth. Did he look drunk? “No, little bit.” Barbara Wheeler however described him as “full drunk”. She said he didn’t hit or touch her and she didn’t see him hit or touch anyone else.

Janet Wirri pays the rent at House 4. Her family was shouting her on Christmas Eve. They’d been to the bottleshop at “the Gap Motel” in the afternoon to buy four or five bottles of Poker Face chardonnay. Later they went back to get a 30-pack of beer. One of her group also had some rum. Ms Wirri agreed she was full drunk from wine before she started on the beer. Later she qualified: “I was drunk but I could see.”

She was sitting outside resting when she saw Sebastian Kunoth walk past, through her front gate and into the house. After Sebastian went in, did lots of people come out? “Might be, I was outside.” She later heard voices screaming. She saw “them two fighting”. Which two? “Them two, husband and wife.” They were “a little bit far away”. The estimated measurement was 20 metres. What did she mean by fighting? “He was holding her down … that’s when I told them to leave it.” What happened next? “Sebastian then walked off.” Did she stay or walk off? “… I came straight back …”

At this point, the muttering in the gallery began, followed by the apparent threat to Ms Wirri as she sat in the witness box.