Front row from left: Modeling a dress in fabric designed by Nancy Gibson is Muk Muk’s gallery manager Nyssa Mullooly; visual arts lecturers Amanda McMillan (left) and Brigida Stewart, both in blue; in the middle, modeling Eileen Moore’s fabric design, is Amy Turner, while her daughter is wearing The Flower Tutu by Amy Numbulla. The models’ earrings and head-dresses are also individually designed and hand-crafted.

The bounty of the bush – closely observed, its creatures, plant forms, patterns, colours distilled by artists who call it home – is the wellspring for the contemporary desert design of Batchelor Institute visual arts students. 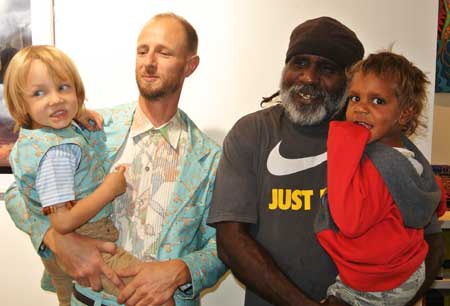 Their work is on show at Muk Muk Fine Art under the title The Forkleaf Project, chosen for the grove of corkwood trees, with their fine forked leaves, that grows around the art room at the Desert Knowledge precinct.

Right: Designer Robert Bronson, with his son Arnold, and Jason Quin with his son River. Quin is modelling Bronson’s Whistling Kite suit. After initial drawing, the repeat pattern was developed by Bronson on a computer, using Photoshop at which he is adept. Quin works with the students, providing “social enterprise support” – advice on how to develop a future design-based business.

The exhibition brings together screen prints and digital prints on fabric and upholstery, as well as ceramics and some beadwork. The printed fabrics steal the show, taken to another level by this year’s student cohort and crafted into furnishings and clothing. 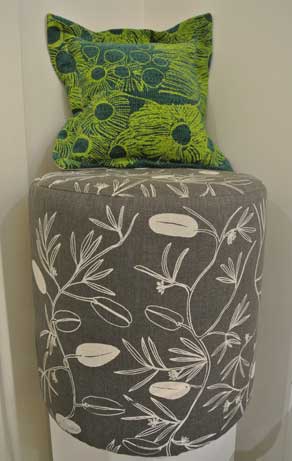 Particularly striking are the upholstery designs, presented as low buttoned ottomans or tall ottomans, finely judged in colour and pattern to make for one-off statements of desert-inspired beauty that would uplift most contemporary rooms.

Motifs of plant forms predominate – flowers, leaves, seedpods, branchlets – but there are also birds and some classical motifs of Aboriginal design, such as concentric circles, u-shapes, footprints. Some artists are working well with negative space, achieving a restrained elegance; others are making their impact with the intricacy of inter-locking overall patterns.

At the show’s opening last night there was something of a thrill in the air, a sense of a new desert enterprise being born. Artists can’t really make money from one-off designs at the modest prices being asked, but it’s hoped the show will seed interest in taking the project to the next level, said visual arts lecturer Brigida Stewart.

A commission from a hotel, for instance, would be the kind and scale of job they would like to tackle. And having their own digital printer – price tag $160,000 – would help bring down production costs (the fabrics on show at Muk Muk have been digitally printed in the USA, although everything else was locally produced).

– Story and photos by Kieran Finnane. SCROLL DOWN FOR MORE PHOTOS.

Below: Bush Tucker by Kathryn Queama on a buttoned ottoman; Two Women Dreaming by Beverly Edimimtji on the orange cushion. The blue cushion shows a Sunflower design by Caroline Bohning. 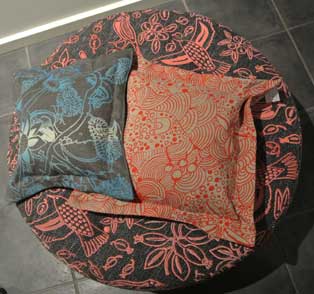 Below: There is a matching ottoman for this children’s armchair and pillows, credited jointly to C. Bohning, L. Daniels, and Ronda Napanangka. 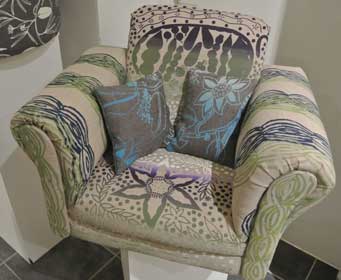 Below: Birds by Kathy Inkamala on a buttoned ottoman; Bush Sultana by Jeannie Lewis on the cushion. 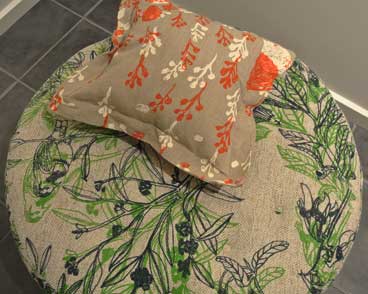 Below: Emma Hurley modeling the dress designed and made by Carmel Ryan, credited with inspiring The Forkleaf Project. The fabric was designed by Topsy Fisher and Elsie Numina. Photo courtesy of Carmel Ryan. The dress is on show at Muk Muk. 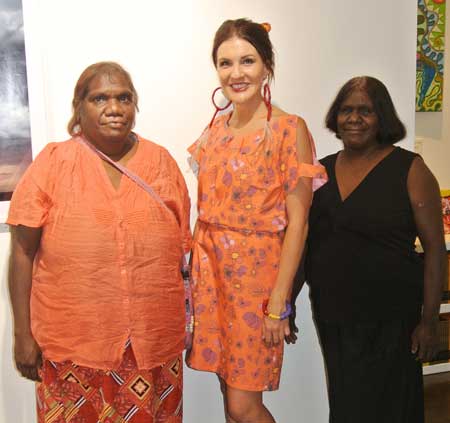 Below: In the foreground right is Sia Cox wearing fabric in a black and white Bush Banana design by Kathy Inkamala; her head-dress was made by Lois Hopkins; the table cloth is a Bush Sultana design by Jeannie Lewis. Robyn Spandonide, also looking at the camera, is wearing The Dragon Fly Dress, with Green Batik sash; the fabric was designed by Rosanne Ellis and Velda Morton. 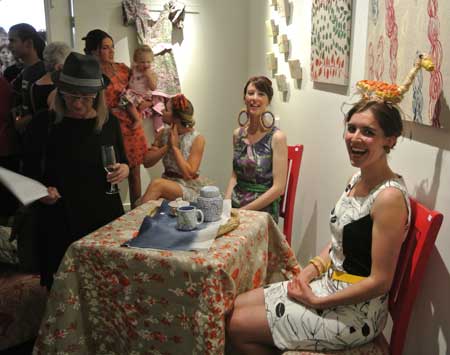