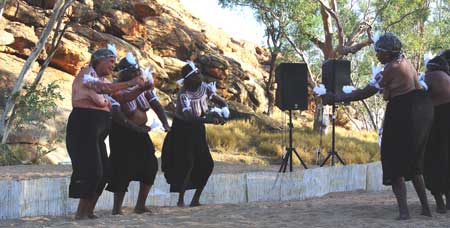 PHOTO: Sacred rocks behind the Mbantua performance area at the centre of the latest festival controversy.

Mbantua Festival chairman Neville Perkins has clarified an issue surrounding a statement he made yesterday about sponsorship negotiations with Imparja TV, but he attacked its CEO Alistair Feehan over a string of other matters.

Mr Perkins gave a statement to the Alice Springs News Online following a response from Mr Feehan late yesterday, which appeared on the News Online for several hours this morning, before being withdrawn by Mr Feehan.

Mr Perkins was quoted in the report as saying that Imparja “had committed $100,000 from its alcohol advertising revenue” but that Mr Feehan “had tried to block that payment”.

The story draft was both emailed and read out to Mr Perkins ahead of posting, but he now says there had been a “misunderstanding” and he had not made that assertion “as such”.

However, Mr Perkins says now: “The facts are that we approached Imparja, through its chairperson, and applied for sponsorship of $100,000 for our Mbantua Festival some time ago.

“The Imparja chairperson indicated to us that he was supportive of the festival and that he would take our submission to the Imparja board.

“Mr Feehan’s allegation [in the statement now withdrawn] that he made an offer for Imparja to become a media partner, which he alleges was ‘refused by the organisers’, is news to us.

“Mr Feehan later advised us that he had rejected or refused our request for Imparja sponsorship. We then decided to go over his head to the Imparja board,” Mr Perkins says.

“It is interesting to note that Mr Feehan has exposed himself by now admitting that he had refused, rejected or blocked our sponsorship request to Imparja.

“We have no knowledge whatsoever of Mr Feehan’s latest allegation that the Imparja chair had agreed with his refusal of our sponsorship request.

“This had not been communicated to us and indeed we are still waiting to hear from the chair and the Imparja board about the outcome of our request to the board for sponsorship.

“If Imparja had only $30,000 in its Alcohol Advertising Revenue Community Fund, then Imparja could have offered us sponsorship in kind in the nature of free air time to advertise our festival, but not even this was forthcoming from Imparja.

“Unlike Imparja, CAAMA worked in very well with us and kindly provided discounted technical production facilities and advertising on CAAMA Radio.

“We ran out of time waiting for Imparja and in the meantime we had received a great offer of sponsorship which we accepted from the TEN TV Network, a non-Indigenous owned network, in the nature of free air time valued at about $100,000, in the absence of Imparja TV.

“To their commendable credit, the Ten Network, unlike Imparja, came to the party of our major Aboriginal cultural festival and did a great job with great adverts in the lead up to the festival,” says Mr Perkins.

“Contrary to Mr Feehan’s ludicrous claim, we have been discussing Mr Feehan and Imparja’s lack of support and sponsorship with a number of concerned Imparja board members in recent times.

“All the Aboriginal owners and shareholders should now be asking, as we are, why Mr Feehan and Imparja, Australia’s only Indigenous owned, satellite delivered Remote Commercial TV Service, have failed to support or sponsor in any way [the] cultural festival hosted by our local Arunta traditional owners, leaders, native title holders in Alice Springs for Alice Springs.

“We should also all be asking why Mr Feehan did not see fit to cover the various festival events for Imparja and for the Nine Network, along with all the other media at the festival, including SBS and National Indigenous TV?

“I will make myself available to discuss these issues and the truth further with the Imparja Board at their next meeting.”

Meanwhile Dr Scambary says: “The AAPA rejects Mr Perkins’ account of his dealing with the Aboriginal Areas Protection Authority as being scurrilous and misleading.

“The AAPA agreed to cap costs for issuing a site clearance for the festival at $5000, despite estimating that it would cost this organization $15,000.

“Shambolic last minute planning on the part of the organisers pushed the total cost of issuing a site clearance to $23,000.

“So the AAPA actually subsidised the Mbantua Festival to the tune of $18,000. This is despite the considerable funding granted to Arrulka Business Aboriginal Corporation by the Aboriginal Benefits Account.

“In addition custodians of important Alice Springs sacred sites showed immense good will to the festival organisers. This is despite their serious misgivings about the impacts of such a large event on sacred sites within the Telegraph Station Reserve,” Dr Scambary says.

“Their concerns about non-Arrente men dancing close to a specific sacred site were raised and through extensive consultation were ultimately accommodated by the resulting AAPA Authority Certificate in a way that was appropriate.

“Mr Perkins comments about the concerns of female custodians and his disregard for their cultural responsibilities are offensive, inflammatory and unnecessary.”