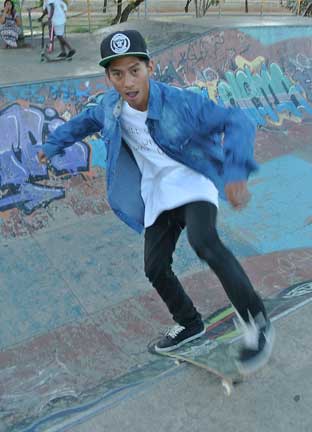 It all started in the northern end of the new Todd Mall when Marco Formoso (pictured) skated the benches built for skating.

When the mall refurbished at a cost of $5m opened, skating was forbidden – or so the police believed who moved skaters on. Then skating was permitted.

Then it was forbidden again.

Marco skated when skating in the Mall was verboten. His victimless offence – misunderstanding? – cost him a blistering $576.

Two town council rangers approached him and demanded, several times apparently, to show them ID. The following is Marco’s account (he is pictured at the skatepark):

He says he was plugged in (wearing headphones) and didn’t hear the rangers calling out to him.

When he did he had no idea who they were. He asked them to show their ID first. He considered that was his right.

One of the rangers replied: “I don’t have to. I am a ranger” and called him stupid.

This went on, backwards and forwards, for some time.

The police were called. The ranger showed Marco his ID and Marco showed the ranger his ID. Marco thought that was the end of the matter.

Some days later he received an infringement notice for “failing to provide details.” (Did the ranger also receive such a notice, one might ask.)

A town council source says the ranger’s badge always has to be visible and was attached to his belt.

In fact the badge is attached with a retractable string so it can be lifted up and shown without detaching it. Marco says the ranger did not do that.

This raises the question: Did the ranger expect Marco to drop to his knees so he could examine the badge?

Fellow skater Frankie Wilson (pictured left) corroborates Marco’s account of the events and so, Marco and Frankie are confident, would three other mates who were present at the confrontation, at least for portions of it (at one point they were talking with the second ranger).

Marco, a recent arrival from Melbourne, a city highly friendly towards skateboarders, and prior to the incident not familiar with our council rangers, is no slouch.

He is settling in Alice, has had a number of casual jobs and has just landed a permanent one with a prominent retail store.

He’s paid the fine. Given the confusion about skating in the Mall, should the council pay back the fine and let bygones be bygones?

Marco has learned his lesson about the – present – rules in the Mall, and isn’t that the main objective of by-law enforcing?

Despite several requests from the Alice Springs News Online the council did not provide an official comment. We will update this report if we receive a comment.