Bungalow Song, the living past 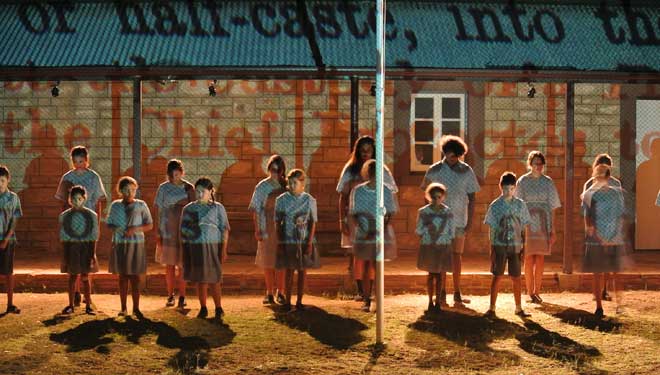 The living past spoke to us last night.  It is there every day, held in the trees, the hills, the river but with Bungalow Song we heard its human voice, many human voices.

Arrernte chant – the voice of Max Stuart – reached us as if on the wind through the trees. The priceless photographs and film footage – of individuals, men, women and children, of family groups, of ceremonial groups – taken at this very spot at the end of the nineteenth century was projected onto the tin roof of the Old Telegraph Station building in front of us. It was a riveting experience of the fact that the Arrernte people and culture prevailed in this place before the ravages of European settlement. 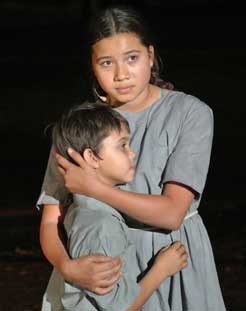 Fast forward by just a couple of decades – it doesn’t take long for children of mixed descent to be born. There they are standing in the hills. And centre stage, the Northern Territory Aboriginals Ordinance, voiced over and its text projected onto the tin roof. It commands the blanket removal of mixed race children from their families, and their institutionalization. Suddenly in the darkness the headlights of a car, the children scatter. One runs ahead in the beam. She’s caught and driven off, her mother running after her, in unbelieving horror. She is screaming. She sinks to the ground, throwing dirt over her head.

It was stark and wrenching. We saw it only once during the production but we know it happened many times. Not all children who ended up living at The Bungalow were forcibly removed but it is accepted that the majority of them were. It is mostly their story that Bungalow Song tells, focussing on the children’s experience of loss, immense loss.

A packed house for this highlight of the Mbantua Festival heard the story in two inter-woven strands.  One from the children of today: some of them, the descendants of original Bungalow residents; all of them, of the mixing of the races that makes Alice Springs what it is now. The other  strand came from the children of then: Bobby Randall, Harold Furber, Warren H Williams (these three in the flesh) and many other prominent local citizens voicing, in recorded testimonies, the stories of their forebears. 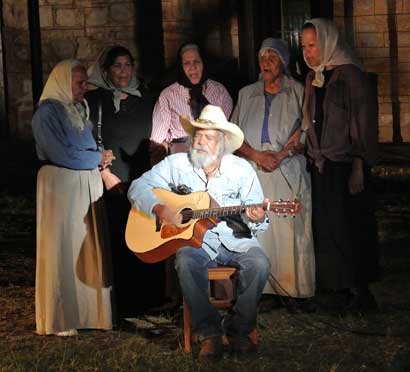 Much of what the child actors delivered was in song. After that first scene of abduction, the poignancy of the child alone, torn from home, was rendered beautifully by a young, sweet-voiced soloist. There was a rowdy, funny group number on a mass outbreak of “smelly, runny poohs” caused by eating too many bushtucker berries – this because the children were always hungry on their meagre Bungalow diet. There was also a song of very contemporary feel by six of the older girls, allowing them to show off their performance skills but also expressing something of the lively, affectionate companionship that the Bungalow children found amongst themselves.

Songs of quieter, sadder mood showed the older children, girls, taking on mothering roles, calming babies at night, taking younger children under their wing. Soloist Imbana Forrester gave voice to the painful experience of being shamed for having an unacknowledged white father. Soloist Maggie Church-Kopp (above left) movingly responded to the call of lost language, a grandmother’s voice – that of Margaret Kemarre Turner OAM – reaching her from beyond the fence. And in a really fine performance, Kaya Jarrett (below left), singing and speaking, told of sexual abuse by The Bungalow superintendent, Freeman (he was hired with his wife as matron in March 1929, replacing Ida Standley). The girl wrote to the Protector of Aborigines, begging for help and, thankfully, he responded. In what the script describes as “a landmark case, the first of its kind”, the testimony of five girls was listened to and Freeman was gaoled. 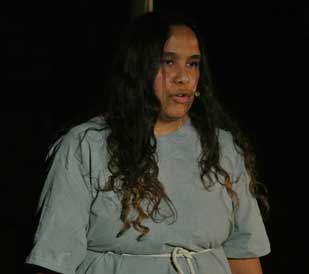 The language of theatre, honed by director Nigel Jamieson, was particularly potent for these scenes. It started with a song about the Pungkalungka – a bogeyman of the desert – with the children frightening one another in a game. Slowly we are made to realise the threat is more than spectral. Freeman’s muscular silhouette materialises, his hand reaches out, the terrified girl feels it on her skin …

With a rising and dimming of lights different areas of the theatrical space were brought into focus. In this way the production moved easily between the stories told first by the children, then by the adults. Bobby Randall (above right) gave us his heartbreaking classic song of the experience, “My brown skin baby, they take him away”. He is getting old now, of course, and his voice is not quite what it was, but the song still drives straight into the heart of the matter and to have it sung by him, to whom this happened, meant there was no possible distancing from the subject of the production. Here was the living past, in person. 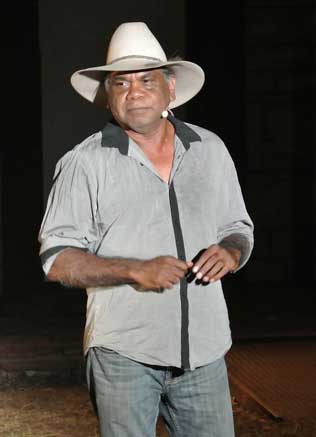 Warren H Williams (right) also made a compelling contribution, speaking with warmth and pride of his mixed ancestry, while also detailing some its pain – particularly through the story of his grandmother who had three children to a white man. They were taken from her and she followed the telegraph line to find them at The Bungalow. She joined other women sitting outside the fence, trying to have contact with their children. With forceful simplicity, calling to his side his little boy –   “black dad, white mum” – Williams brought home the anguish of a loved child being taken away. He dedicated his song to the mothers who experienced this grief.

The story might have ended on that note but it was a triumph for it not to: the song was turned around, to bear witness to what has been a remarkable story of survival, resilience and fight back. “Then the children came back,” they sang. We could see the joy of being able to say it on the young actors’ faces. Then Harold Furber (below), another survivor of the period – removed to Croker Island when he was just four and a half, his sister only two and a half, never to 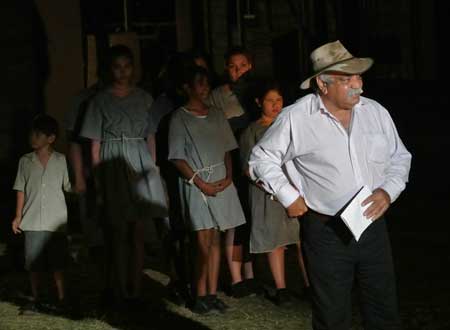 see their mother again – brought to the stage members of the big family that The Stolen Generations have made of themselves. It was amazing to recognise among the group women who featured in the recent documentary Croker Island Exodus, about their escape from the island on foot, canoe and truck following the Japanese bombing of Darwin. To realise the magnitude of their life experience – first their removal from their central Australian homelands, then that wartime exodus all the way to NSW.

Furber, speaking earlier of his own family’s experience, read aloud a letter to the Protector of Aborigines, written in 1941 by his grandfather, Frank Furber. It was another moment in the production when the enormity of the wrong of the race-based forced removal policy made itself felt.

“Dear Sir,” Frank Furber wrote, “Myself and my wife, both half-castes, do not want any of our children removed or taken away from us, out of central Australia, their country, to any other place or country. It would not be fair to us, the loss of them. And also they would cry and fret and it would be breaking us up for all our lives … We wish to record our protest …”

Frank Furber never got a reply from the so-called Protector, but half a century later Australia started listening. The story cannot be forgotten. Bungalow Song is a milestone in not forgetting. 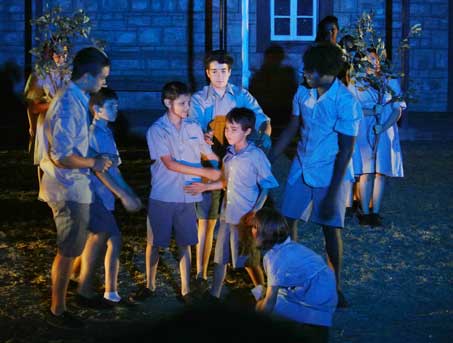 The youngest boy was the guinea pig for testing food the children found. If it didn’t kill him, it was okay. 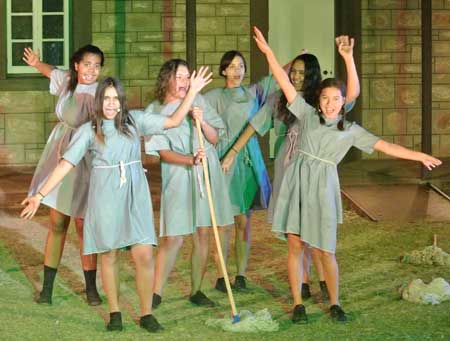 Girls were taught domestic skills; they found affection and companionship amongst themselves.

In a landmark case five girls gave testimony of sexual abuse; the superintendent was convicted.

The children were issued one army blanket each.

A mass outbreak of “smelly, runny poohs” – the cast really enjoyed this number.

Below: Harold Furber, the production’s senior advisor, introduces survivors of forced removal to the audience, from right, Florrie Nichols, Linda Vale, Netta Waters, Ruby Braun, Jessie Waters, Lenny Bell,  Alec Ross. All of them were removed from their families to Croker Island.