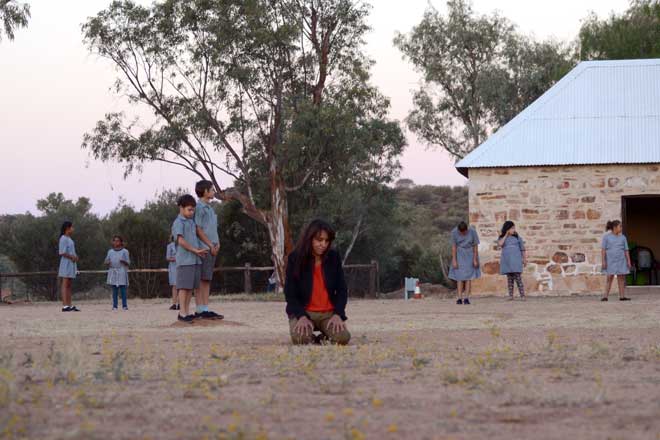 Above: Rachel Perkins, creative producer of Bungalow Song, with some of the cast on site. Photo by Alexandra Hullah.

The core inspiration for the Mbantua Festival arose from its site at the Old Telegraph Station. The ideas flowed as soon as it was chosen, says Rachel Perkins who returned to her Arrernte homeland to work as co-artistic director for the festival alongside Nigel Jamieson, as for the Yeperenye Festival in 2001.

They already knew that they didn’t want this festival to be a grab bag of visiting artists, no matter how thrilling and famous. They wanted it to be about the desert, its cultures and communities. For Perkins one story to tell was immediately obvious – it would be about the period when the site was home to children of mixed Aboriginal descent removed from their families, most of them forcibly. They are now known as The Stolen Generations.

Perkins’ grandmother, Hetti, daughter of a white father and Arrernte mother, cared for the children as “senior dormitory girl” – to use the language of the era although she was already a mature woman and a mother herself. In 1932 The Bungalow – so-called after the tin sheds which had originally housed the children and their adult carers in town – was moved from Jay Creek to the Telegraph Station.

In terms of physical structures, there is little left of The Bungalow period on the site but there are plenty of memories, some recorded in published books, some as oral histories in the NT Archives, some in filmed accounts, plenty more in family stories, like Perkins’ own. 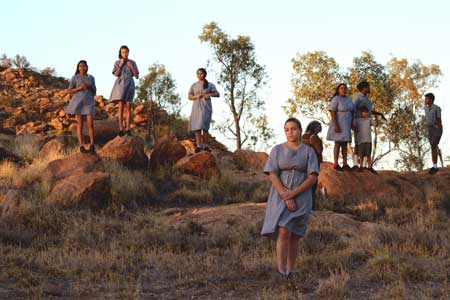 These have been the foundation for the theatrical production, Bungalow Song, which will be one of the festival highlights later this week. Directed by Jamieson, whose theatrical expertise is in large-scale events and ceremonies, with Perkins as creative producer and written Sue Smith (screenwriter for the telemovie Mabo, which Perkins directed), it will be performed by local children, some of whom are the descendants of original Bungalow residents.

In partnership with the Central Australian Stolen Generations and Families Aboriginal Corporation, the festival has created a database of descendants, many of whom will be in the audience on opening night, reserved for them together with the survivors who are still alive.

“It was an amazing education for me,” says Perkins, “to discover that the descendants form the backbone of Aboriginal Alice Springs” – heading up or prominent in the major Aboriginal organizations. “They have made an amazing contribution.”

The production is in part fiction, based on the true stories of a number of children distilled into a couple of characters. But there are also testimonies interspersed through the drama, taken directly from the written and oral records and attributed to the individuals belonging to them, heightening the authenticity and significance of the story.

The adjacent Arunga Park speedway suggested the festival’s other major production, Bush Mechanics Live. Jamieson came up with the early concepts but handed over to the original directors of the Bush Mechanics television series, Francis Jupurrula Kelly and David Batty. It’s about “guys in cars”, says Perkins – a spectacle full of noise, smoke, fire, male stupidity and high spirits. There’s some competition involved and two bush mechanics currently doing gaol time have been allowed to prepare a car and enter the event.

There are also film screenings, including Buckskin by the young Alice Springs director, Dylan McDonald, which won the Foxtel Australian Documentary Prize at the Sydney Film Festival, and Mystery Road, directed by Ivan Sen and starring Alice Springs’ most famous screen talent, Aaron Pederson, as a detective. All screenings will be followed by a Q&A hosted by Erica Glynn.

The weekend will be full of workshops, forums, an exhibition, an arts market, traditional dancing, a youth program and a concert with major acts including Jessica Mauboy. Perkins is overseeing much of this. Particularly close to her heart, and again a learning experience for her, will be the women’s traditional dancing by a combined Arrernte group led by senior law women such as Margaret Kemarre Turner and Agnes Abbott.

There have been challenges – there are fewer singers alive today than at the time of the Yeperenye Festival and sorry business will keep some groups away – but the traditional dancing, women’s as well men’s, will be central to the expression of Arrernte cultural strength, regeneration and excellence represented by the festival. This is what made it “so important” for Perkins to be involved, she says.

Below: The original Bush Mechanics Francis Jupurrula Kelly, with the dreads, and David Batty at the wheel, during the Alice Desert Festival parade. Photo by Kieran Finnane. 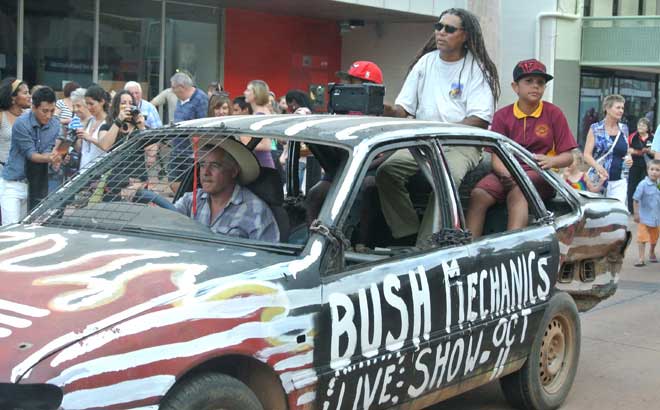