Circus of madness and magic


Story by KIERAN FINNANE. Photos and video by ERWIN CHLANDA. 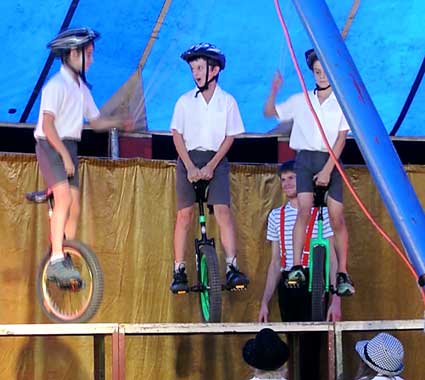 “Running away to the circus” – the image is of escape, overthrow of the strictures of the adult-governed world. But what if the adults are completely on side? If they’re convinced that here lies the path to “truth, wisdom and knowledge”?

This is the delightful prospect held out by a handful of dedicated local adults, accomplished circus performers themselves, to local children of commitment and daring. Together they make up the Circus Dust troupe, which staged the wonderful Philosophe as part of the Alice Desert Festival. 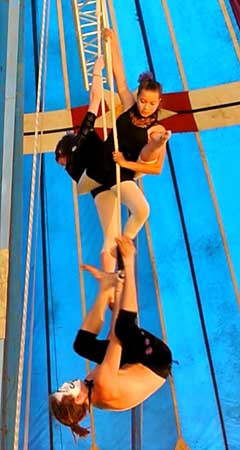 There was no ‘them and us’. Adults paired with youngsters on an equal footing, the whole troupe opening the show with a dynamic display. Young Tom Reid (11 years) provided a great foil for older Matthew Leyland in their comic mime acts. Adult James Loveday was part of a muscular performance (right) on trapeze together with Gemma Coffey (15) and Maggie Church-Kopp (12). Adelaide Church, coordinator of the troupe, threw herself into twirling the aerial whip (I think this is what it’s called) for a thrilling display by Lumyai Eager (12).

Acrobat and juggler Ludovic Dumas did take on a ringmaster role with special guests, the Ninja Circus, but he also got down on the floor with the lads for the finale of their act, a flying aerial somersault by one young performer over the rest. Dumas, who has worked around remote communities in the Centre leading youth programs and creating circus shows since 2009, was employed by NPY Women’s Council to create the Ninja Circus in Mutitjulu. It only began last year but already the youngsters have admirable tumbling and juggling skills – some even with four balls – and presented an exciting, tight performance.

The program promised “madness and magic running gleefully hand in hand”. It delivered this and more – courage and heart and the striving for perfection.

Below: The whole troupe opens the show (some not visible in our photo). Bottom: Maggie Church-Kopp and Lucy McCullough on the aerial lyra (hoop). ED – Lucy is wrongly identified as Eloise Montefiore on the video, sorry Lucy! 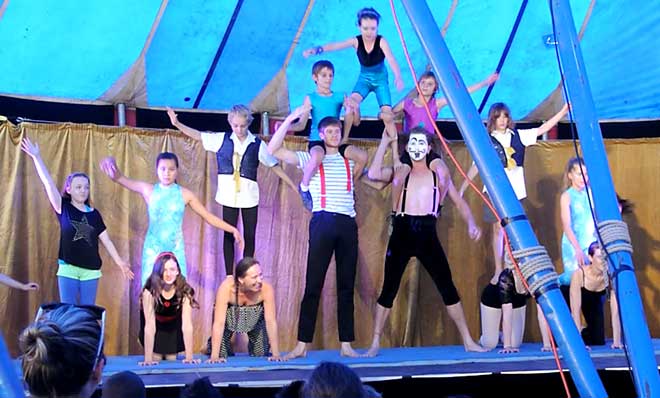 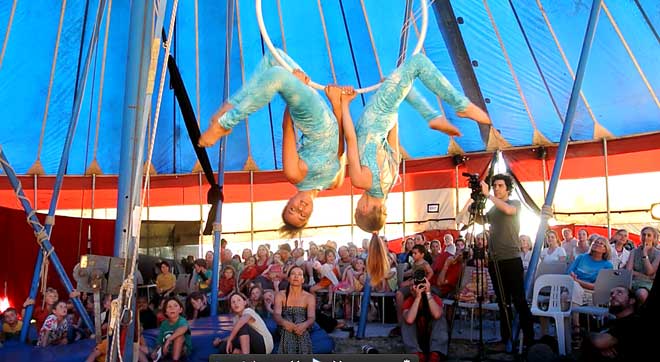