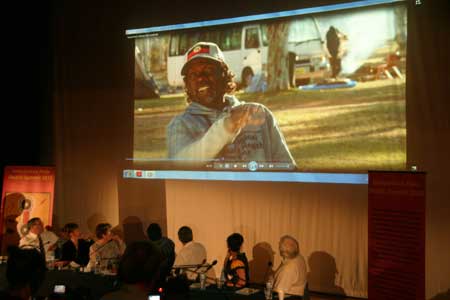 Violence towards women in Aboriginal communities is not only down to disadvantage.

Half of the inmates in the Alice Springs gaol are men who are there for having assaulted their intimate partners. Justice Jenny Blokland is one of the people gaoling them. It gives her no pleasure, she told a public meeting in Alice Springs last night, attended by hundreds; it’s a protective measure, often short-term, and doesn’t solve the problem.

Other speakers put forward possible causes – alcohol and all the reasons people might choose to “drown conscience” in the bottle, as visiting Professor Stuart Twemlow from Houston, Texas put it. Justice Blokland acknowledged the very difficult social problems in Alice but said this does not explain the “gendered nature” of the violence: 80 to 90% of perpetrators are men.

The meeting came off the back of a male health summit, the third since 2008, organised by Central Australian Aboriginal Congress. Its theme was “Time for Action”, said Congress Deputy CEO Des Rogers.  He showed a short clip from the gathering (above), one of a number that will promote the summit’s messages, one of them being that men need “to heal” to get back to being “the head of the family, to control the family and teach the kids”.

The need to redefine the role of men – and not only Aboriginal men – came up repeatedly.  “We need to reinvent ourselves,” affirmed Ken Lechleitner, President of Australia’s First Nations Political Party, to applause. He reached out to all in the room by acknowledging not only the Mbantuarinya traditional owners but “the Aussies”: family violence was a problem of “dual heritage and dual responsibility”, he said.

Prof Twemlow said the concept of what a man is relative to women is not very clear. This is not confined to Aboriginal men; the roles of all men have been under challenge by the women’s liberation movement, he said. The evidence from Congress’ male health summit, including the men’s 2008 apology for being cruel to their women and children, points to the need for people getting together to discuss what their roles are as men and women.

The second international guest, Lord John Alderdice – a politician from Northern Ireland who sits in the House of Lords – drew on his experience of dealing with “whole communities” responsible for violence in his homeland. He spoke of the importance of talking to the men 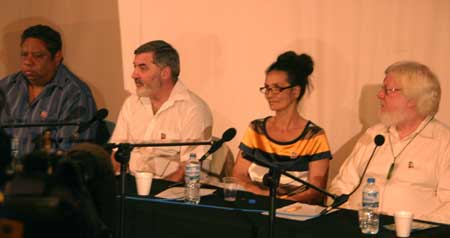 who do the violence, to understand “what’s going on inside their heads”. High rates of alcohol abuse, poverty etcetera do not provide the whole answer, he said, as there are other parts of the world where these things exist but which are “not like here”.

He talked about the degree of change that men around the world have experienced in terms of what they can contribute to their communities and noted that the change experienced by Aboriginal men over the last 40 to 50 years is much greater than in the whole of the last 60,000 years. The focus needs to be on finding ways to adapt to such a fast-changing situation.

Julie Vincent from the floor said men need to be empowered, given a sense of accomplishment, value and identity. This received a round of applause.

Beverely Angeles from the floor, who works in education, stressed the importance of everyone having a place: “Our males are in limbo – they don’t know their place”. She too wanted acknowledgement of the skills people have.

Northern Territory identity Charlie King, who was MC for the night, while acknowledging that Alice Springs has a particular problem – with an assault rate twice the NT average – referred to the half million women in Australia annually who are subject to sexual or physical abuse: “an appalling statistic that somehow does get traction”.

Bruce “Tracker” Tilmouth from the floor said the problem lies with “the economic paradigm” in remote communities and lack of services, which drive people to move into town where they don’t know how to get on.  They walk around drunk because they don’t know what else to do. He said the Central Australian economy is based on services to Aboriginal people – a “nigger farm” is how he put it with typical provocation, a “big social experiment” with governments spending money on programs “that don’t add up”. Services need to be decentralised.

Phil Walcott, psychologist and independent candidate in the recent federal and last Territory election, followed with a comment on the language of negativity, asking what would harmony look like.

Prof Twemlow took this up, speaking about his work in Miami and Puerto Rico at neighbourhood level, with “natural leaders – the people who do things without having to be asked, because it’s their home”. They regularly get together to talk about how their neighbourhoods are functioning and set goals for improvement. The results are impressive, he said, with everything from homicide rates to the occurrence of graffiti going down, but it takes time and commitment – it’s a “marathon”.

Mayor Damien Ryan pointed out some of the good work being done on the ground in Alice, naming Girls in the Centre and the Clontarf Football Academy as examples.

Congress CEO Donna Ah Chee appreciated Prof Twemlow’s point on the long-term commitment required, but said there is something that can be done to “make inroads tomorrow” on the domestic violence rates: reducing the supply of alcohol. If she could do only “one thing” to bring about change, this would be it via a floor price set at the price of beer, a take-away free day, timed with Centrelink payments, and the reintroduction of the photo ID system for purchase of alcohol, abandoned by the CLP Government as soon as it came to power.

She also stressed the importance of education, starting in early childhood to prepare children for a positive experience of schooling. She claimed strong results from Congress’ home visitation programs working with parents, which she said should be run throughout Central Australia, and lobbied for the introduction of the Abecedarian early daycare model. 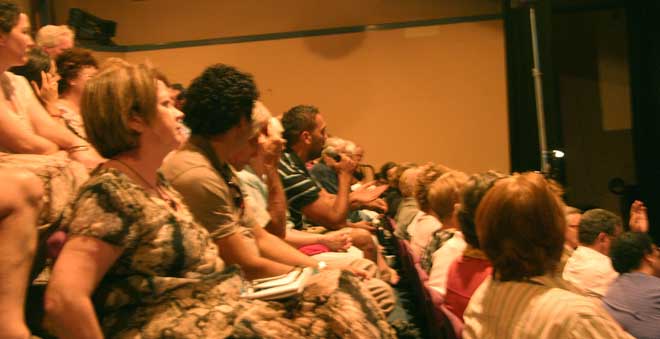 Above: Part of the audience which filled the Centralian College theatrette. Tyson Carmody on the microphone.

Prof Twemlow said there is “new science” in the understanding of how young children think and they can be taught through classroom activity how to control their feelings, empathise with others, take into account others’ viewpoints.

Justice Blokland agreed with Ms Ah Chee that reduction in the supply of alcohol would have “the biggest impact at the least cost”, but how it can be done when the issue is now so “political” remains a question. The criminal law response to offending is not enough. Something needs to be done to teach young people about “respectful relationships”. She mentioned the program “Loves Bites” as one model.

Defence lawyer Tanya Collins, speaking from the floor, asked why more isn’t done with the “huge captive audience” of men in gaol. She asks the “young fellers” she represents in the criminal justice system all the time whether they are getting any opportunity to deal with their anger, their grog problems and so on, and they say “no”.
Another speaker from the floor, a nurse, also spoke of the high rates of hearing loss and tinnitis (ringing in the ears) among men in gaol that is not being addressed.

Mayor Ryan and fellow panel member Julie Ross, who heads up the NT Chamber of Commerce, both spoke about the importance of economic development. In response to a question from Francis Xavier, MLA for Arafura, Mayor Ryan said regional development needs a “really strong commitment” from government. In remote Australia the NBN is not much help, he said, though Lord Alderdice countered that broadband, coupled with education, could lead to jobs no matter how remote you are.

Mrs Ross said the Chamber has been lobbying for economic development in the Growth Towns but there are “land issues”. This got Central Land Council director David Ross to his feet. If you want access to land, talk to the CLC about getting a lease, he said, but in most Aboriginal communities they have run out of land serviced by power, water, sewerage. The CLC is hoping for an investment of $.5b from Infrastructure Australia.

A young woman in the audience, identifying herself only as Sarah, was “scared abut the future”, the likely “racist attacks” on Aboriginal people from the incoming federal government. She wanted to know from panel members how they were preparing for that.

Charlie King reminded her that the focus of the meeting was on high levels of family violence, which continue no matter which government is in power. We need a community movement to do something about it, he said.

The spirit of his remark was taken up from the floor. Tyson Carmody, who works in education, said he’d like to broaden the horizons of relationships for the young people he deals with: “What you don’t know you’re scared of”.  He also said that change had to come not from government, but “from us on the ground – we’ve got to get up and do it ourselves.”

John Liddle, manager of men’s health at Congress and the initiator of the 2008 summit, also brought the discussion back to individual action but not before commenting that Aboriginal men do not have a role on communities, “except as perpetrators or potential perpetrators”.

He told a story of himself as a younger man at the football, standing by with others while an Aboriginal man was “kicking the shit out of his wife”.

“We all have to take the issue in hand,” he said. One of the actions that we all can do, is that if we see violence happening, we’ve got to say something about it: “We don’t need money, we need a bit of heart and the gonads to go with it.”

Charlie King closed the evening with a statistical snapshot of the NT: 80% of people in gaol are Aboriginal; 80% of children in the protection system are Aboriginal; unemployment on Aboriginal communities stands at 80%.

“Are they connected?” he asked. And “how different” it would be if you could say 80% of the university population was Aboriginal.