Hello! Is anybody out there? 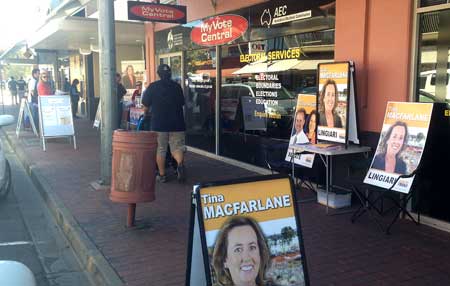 Is there really going to be an election on Saturday? The major lobbies for Alice Springs could be forgiven for wondering about that, at least until this morning when the Coalition dropped the Outback Highway bombshell, a massive boon to the ailing tourist industry, to mining and remote communities.

In response to requests from the Alice Springs News Online, local pressure groups consulted with their members and formulated wish lists. This was done in the not unreasonable expectation – after all, this is a democracy – of getting replies and commitments from the people seeking election to very well paid jobs and lots of perks.

We published these wish lists in the early part of the campaign. They came from the Town Council, Chamber of Commerce, Tourism Central Australia, Arid Lands Environment Centre (ALEC) and the Central Australian Aboriginal Congress.

They had made requests for specific funding and initiatives. They wanted the future Member for Lingiari and two Senators for the Territory – whoever they may turn out to be – to commit to meeting these requests, or at least, to fight for them when the nation gets a new government on Sunday. They got little joy.

Yesterday Mayor Damien Ryan said he has had conversations with candidates but received no commitments. The chamber’s Kay Eade says in addition to our survey she has written letters but got no replies, notwithstanding that both major parties are courting small business.

ALEC’s Jimmy Cocking said: “Is there an election? I’ve not seen anyone in town. This is really concerning. Something seems very wrong. They are all running their own agenda. The environment is being ignored, to all our peril.”

Our invitation to respond to the wish lists went out at 3pm on Tuesday last week, with a request for reply by close of business on Friday.

We had written to the CLP, ALP, Greens, First Nations Party and Mr Walcott, who lives in Alice Springs. Only the independent Senate candidate Phil Walcott provided a reply – it is printed in full at the end of this report.

This obvious disconnect between national and local issues is especially damaging in the realm of economic development in the bush – that longed-for panacea for fixing the currently intractable social ills in The Centre.

While Chief Minister Adam Giles claims he has a Territory handle on the problem, his Federal counterparts are not at all clear how to lay the legal groundwork at Commonwealth level.

Mr Giles said in a media release yesterday: “The Northern Territory Government has begun talks with a number of Aboriginal communities that have approached it about new opportunities for advancing economic development.

“We are pursuing a new approach in the bush and have offered to work in partnership with communities that are interested in looking at new ways of developing business opportunities and creating jobs.

“The Tiwi Islanders are among a number of communities that have asked the Government about how they can work differently to break the cycle of welfare dependency.”

It’s a nice thought but it will go nowhere unless some fundamental issues are resolved, especially the ability to lease land in that half of the Territory which is under “inalienable” (you can’t sell it, you can’t mortgage it) Aboriginal freehold title.

Tina MacFarlane and Nigel Scullion (CLP) have given an assurance that the Land Rights Act will not be changed.

They have done so in response to Warren Snowdon’s (ALP) routine claim to Aboriginal people, come election time, that the conservatives “will take your land away” – or words to the effect.

There is powerful evidence that changing the Land Rights Act is exactly what a significant portion of Aboriginal people want. Should Mrs MacFarlane and Senator Scullion, who will be the Aboriginal Affairs Minister if an Abbott government gets elected, have rolled over?

Their claim that leases over land can be issued under the existing Act is not convincing.

After weeks of exploring the issues with the candidates and their staff, the Alice Springs News Online has found no answers to these questions:-

• A land trust, which is the owner of land, according to the Act, requires “the direction, in writing, of the relevant Land Council” to issue a lease. The Central Land Council’s anti-development stance is legendary, except mining which pays its bills. Idleness and stagnation, and all that flows from them, is the CLC’s legacy of four decades.

• An “Aboriginal or an Aboriginal and Torres Strait Islander corporation” can be issued a lease “for use in the conduct of a business by the Aboriginal or the corporation, not being a business in which a person who is not an Aboriginal has an interest that entitles him or her to a share in, or to a payment that varies in accordance with, the profits of the business”. Does that mean a lessee can’t enter into a joint venture with a whitefeller?

• What point is there for an applicant for a lease, who lives on land owned by a land trust, and is in all probability a traditional owner, to contest a trust decision not to grant him or her a lease over portions of the land, when the land council has overriding powers?

• Most trustees are likely to be traditional people, with English as a second or third language. They would necessarily depend heavily on land council advice. What influence would that give to the land councils?

The answers we’ve been getting were, words to the effect, “we’re in caretaker mode” or “we can’t get legal advice”.

At least it’s clear the Coalition wants to tackle the issue, while Warren Snowdon has been content, for some three decades, to leave in place a system that has done nothing to counteract pervasive misery and the loss of countless lives.

•  Tourism – As a former tourism  operator for over a decade and a strong supporter of the tourism industry generally, I whole-heartedly endorse the efforts of Jaclyn Thorne and her marvellous team in their efforts to promote our region to domestic and international travellers.

•  Child care – I fully endorse Damien Ryan’s perspectives with regard to increasing child-care capacity within our town. One of my policy proposals is to create an additional child-care facility at the Alice Springs Hospital. This would be a joint venture initiative involving the three levels of government in conjunction with local industry and commerce. Whole-of-community approaches involve everybody so that we all have a share as stakeholders.

• Environmental – the option of creating stronger and sustainable energy resources (solar, wind and water) lies in the broadening of renewable options. The Roadmap to desertSMART Town 2013-18 provides some excellent ways forward. I am opposed to the Muckaty site proposal on the basis of the geological threats that it potentially poses. It’s also an arrogant approach from a Federal government that believes it can simply dump spent nuclear waste in the NT because we are not a state.

• I endorse Kay Eade’s position that we need to improve the major and minor road systems throughout the NT. Given the nature of our weather systems and the impact they have on roads each year, a stronger investment into building and reinforcing roads is imperative. An accident involving a truck and a car on a single lane bridge on the Roper Highway (near Mataranka) last week reinforces the need to create stronger infrastructure so people can travel the highways and byways more safely.

• Congress – with an annual budget of some $38 million, it’s not so much how much the organisation is gifted but how they spend the money. Congress runs some excellent programs for the benefit of the people it serves. Stronger governance is crucial to overseeing how the money is distributed. The organisation is obliged to be open & transparent in all of its dealings.