Finding the songs left to sing 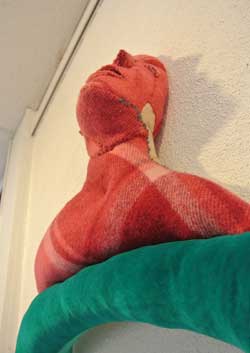 Why do we see so little sculpture in Alice Springs? It may not be exclusive to us, as Henry Smith suggested when he opened the contemporary sculpture show, Art or cunning?, at Watch This Space last Friday. Smith, a sculptor himself whose career began in Melbourne creating projects for theatre, film and public commission before his move to Central Australia some 17 years ago, suggested that people can react against sculpture’s assertive intrusion into what they see as ‘their’ space.

Right: “There’s gotta be some left to sing, everybody can’t have thought of everything” Gillian Welch (detail) by Sia Cox.

Sheer volume can be an issue for artists themselves, as mentioned by both Dan Murphy and Julie Taylor, local practitioners featuring in the show. Murphy said the problem of what to do with large three-dimensional works drove him towards the more two-dimensional format in which he is now working. Taylor, who has the most voluminous work on show, spoke of previous incarnations of large-scale hands, feet, ears, which she chose to render in ephemeral materials as a way of dealing with precisely this conundrum.

Whatever the case, Art or cunning?, curated by WTS coordinator Alice Buscombe, is a pleasure to behold, like the sight of a wide deep bay or river after leaving the desert. To walk into the gallery animated by objects of intrigue, there in the space like other bodies that engage yours, to make your way around them, to feel the attraction of their forms, their varied materials, the push and pull between them, is to realise that you’ve been missing this kind of experience. 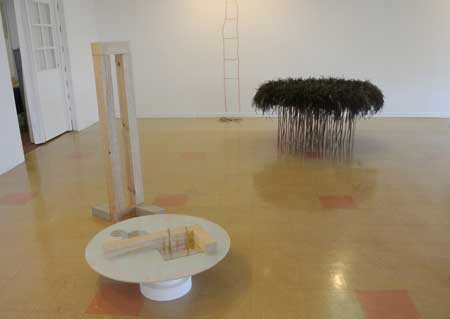 There are seven artists, three local, one from Darwin, two from Melbourne, and another from the Southern Highlands in NSW. Buscombe made her choice on the basis of strong evidence of the artist’s hand in the work – the skill, the adeptness suggested by the word ‘cunning’ – and their conceptual premise. She wanted communicative work, responsive to, speaking of the world we live in and the artist’s role within it.

What is immediately striking is the distinctness of the works on show, particularly in relation to materials and construction. There’s a phrase in the title of one that suggests something about the artists’ processes: “Everybody can’t have thought of everything.” So they set out in search of the “song left to sing”. 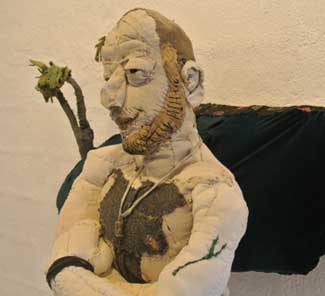 Sia Cox (Alice Springs), whose interest is in what is expressed by the human face and body, has found her ‘song’ in soft sculpture of stitched and stuffed textiles. It is quite remarkable what she can achieve in terms of likeness and character (Love at the Gap View), but perhaps even more interesting is to see her abstracting form and gesture in her Gillian Welch piece. Welch is the singer-songwriter responsible for the above-quoted lyrics (from “One Little Song”). Cox has her, head thrown back, mouth open, chest expanded – all of this in a deft, pared down realism and the sculptural bust of long tradition, except that it’s cut and stitched from a red and rosy-red checked woollen blanket. Then she sits her bust atop an irregular rounded form in velvet of an oxygen-saturated green  – a wide-open mouth, the human voice in full-throated song.

Right: Love at the Gap View by Sia Cox.

Two other works use the language of realism in response to the human body. Julie Taylor’s Silent Gesture has an out-sized hand raised, with forefinger and thumb pointing skywards, the remaining fingers folded into the palm. Taylor (Alice Springs) described it as a work in 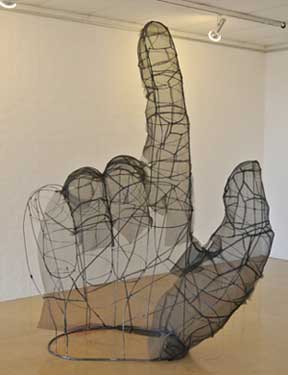 progress and has plans the tie down and complete the covering of the metal armature with the flywire mesh. This, on top of its scale, may have the effect of rendering it too static, I fear. As it is, its half-finished state can speak of a communication caught in a freeze-frame – what came before, what will come after?

Yvette King (Melbourne) adds feet to the repertoire – such moving feet. They have bravely seen out a long life. The curled-over toes no longer touch the ground, the tendons look taut, fit to snap, there are bony protrusions, the ankles are swollen, the skin hashed by a web of fine lines. The feet are life-scale, cast in aluminium and are supported by a modified walking frame that eloquently suggests their crippling effect. The untitled work strikes a very different note from King’s other work on show and it is not surprising to learn of its strong autobiographical roots – King until recently has been a carer for her ninety-four year old grandmother. “It’s very hard to be very old,” she commented during the artists’ talk on Saturday.

Her other pieces are notable for their quirky humour and response to the artefacts of contemporary popular culture, with the One Trick Pony – an immaculately restored toy horse modified to puff smoke through its nostrils – a clever articulation of its consumption-driven character. 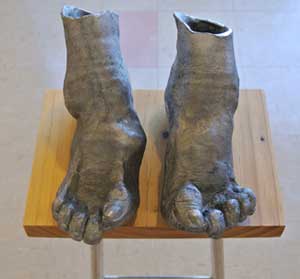 The natural materials and lyricism of Threshold by Louise Owen (Southern Highlands) could hardly be in greater contrast. A circular bed of emu feathers is mounted on a multitude of slender sticks, unequal to the task on their own but together, strong enough. Behind this form, a few scraps of feather lie on the floor at the foot of a shadowy ladder, leading to an indeterminate somewhere.

As Smith remarked in his opening speech, the feathered circle suggests something of a funeral bier and this meaning is reinforced by Owen’s artist statement that refers to her sister’s long illness, to suffering, release and transcendence. But the bed of feathers also looks invitingly restful, and the ladder could be one the mind ascends as it moves from consciousness through sleep to dreams. The emu feathers speak too of the Australian inland; the circle, of human gatherings, the ladder, of human strivings over aeons. Threshold is a lovely, open-hearted, multi-layered poetic work. 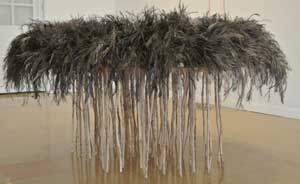 Its circular form, in the installation of the show, is echoed in Composition by Meredith Turnbull (Melbourne) and That’s Mparntwe That’s Town by Dan Murphy (Alice Springs).

There is something of a city street scene feel in Turnbull’s work. The strange semi-deserted cityscapes and featureless citizens of the Italian painter Giorgio de Chirico come to mind. The artist is clearly interested in art history along with the rigors of formal concerns. She works her composition by the relationships of various discrete geometric elements to one another and the whole, while the elegant simplicity of her forms, the honesty of her materials, the juxtaposition 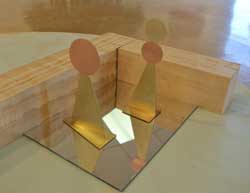 of architectural-like forms with smaller precious objects, all brought together in a single artwork, conjure the ideas of the famous post-WWI German design school, the Bauhaus. It was thus not surprising to learn that Turnbull teaches art history, that she also makes jewellery, that she is interested in the relationship of sculpture and jewellery to the body and in thinking about their differences.

‘Town’ is in the title of Murphy’s work but his vision is not of a town where streets or human-made edifices matter. The closest thing we get is the footy oval at Traeger Park and the railway. Otherwise it’s a place of trees, hills, ranges, river and creek, all in a wonderful circular dance, round and round, radiating out its energy  – Mparntwe, as its Arrernte traditional owners know it and live it.

Murphy works as ever with scrap metals and wire, cutting out shapes, assembling them with wire stitching, layering them, beating them, 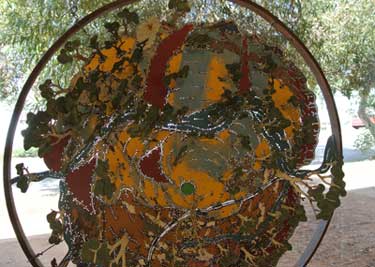 piercing them to work with light and shadow. His ‘paints’ not with a brush but with his eye, seeking out the right colours – their weathering singularly suited to his purpose – from his stock of scrap.

At the artists’ talk Murphy described entering a zone while he works, where in his mind he is in the sky looking down but also on the ground looking up. This departure from a single viewpoint, this fluidity is transmitted particularly in the Mparntwe piece, while generally in the works on display he seems to have achieved an even greater dexterity and lightness than in the past. This is taken furthest in the Mparntwe piece and Landscape, where the worked metal is freed from its past life and its reconfiguration tied into a different frame, allowing for the airiness of negative space to become part of the whole. 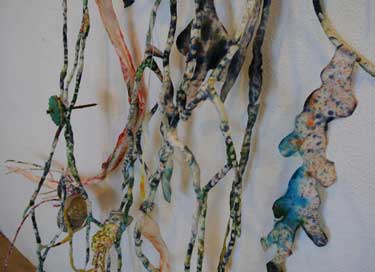 Finally, anchored lightly to the rear wall, even seeming to grow out from it, is a many-tentacled form of unmistakeably marine character. This is Anthropocene Nature by Sarah Pirrie (Darwin).

Up close, we are reminded of the looming tragedy of our polluted oceans, with the trailing tentacles – moulded and cut from wet paper, painted with the jewel-like colours of tropical seas – wrapped around the flotsam and jetsam of modern life.  ‘Anthropocene’ is a name being given to the current epoch in which humankind is having a major lasting impact on the planet, its atmosphere, its plant and animal species, as well as its oceans, as Pirrie highlights.

This is a generous show, with offerings at many levels – sensually delightful, formally accomplished and intelligent.

Watch This Space is at 9 George Cresecent. Shows until September 27. 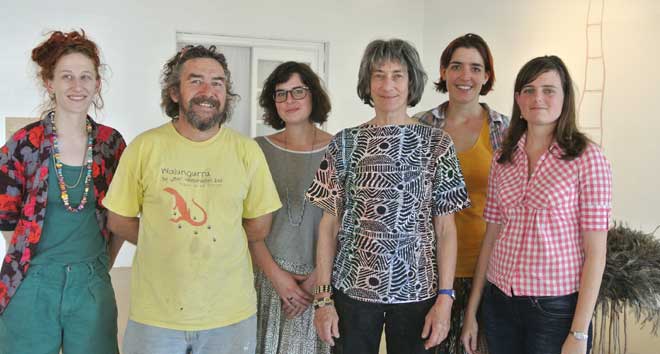