Bright kids to be victims of teacher cuts, say protesters 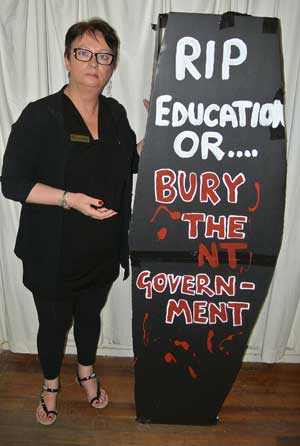 Time to take a break from Federal issues? Here’s a Territory one that teachers and students reckon is hot enough to take to the doorstep of NT Chief Minister Adam Giles.

The main prop of the protest was a coffin in which elements of local education may be buried soon, says Senior Secondary School teacher Penny Whiley (pictured).

She says the school has already lost three teachers – those by their own choice, but they won’t be replaced. Ms Whiley says five more are due to be axed by the end of the year.

While the numbers seem small, the consequences are likely to be grave.

Some secondary school teachers are specialists, unique or one of a small number, and their removal would take away the opportunities of “our incredibly gifted students” as the curriculum is reduced to “a very basic education”.

Ms Whiley herself teaches senior English and is the only teacher of philosophy in the Territory.

“Where will our bright students go?” she asks. “Very experienced teachers are thinking of leaving because they don’t know whether they will have a job here next year or not.

“This fight is not about pay or holidays. It is about maintaining the status of public education. Some of us have spent 20 years or more, delivering NT education, making sure our kids get good jobs and are able to go to uni.

“Many of our NT senior students surpass the achievement standards of SA.”

Martin Bennett, from the Department of Education and Children’s Services, has sent the following update on changes to teacher allocations in Territory schools:–

Early childhood classes will be boosted by 63 teachers, in the 2014 school year, creating additional teaching positions in Transition, Year 1 and Year 2. Overall, 35 fewer teaching positions will be allocated to schools compared to the previous year.

As usual, each school will manage teacher allocations to meet the needs of students and create an efficient working environment for its staff.

Principals are consulting with teachers and school councils regarding the impact of these changes to their schools.

Teachers affected by the new teacher allocation arrangements will be supported by their principals and regional office staff, to identify future opportunities for employment.

The emphasis will be on placing local teachers and local graduate teachers, including those who have completed scholarships. In keeping with this commitment there is no intention to conduct interstate recruitment this school year. We will instead employ teachers living in the Territory.