The desert in all its grandeur 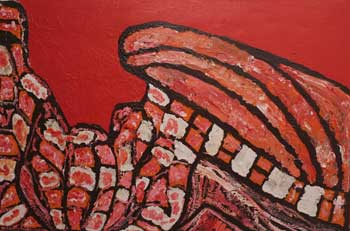 The sweeping energy of great geological movements, at the same time as the solidity of the forms created: no easy task to resolve in paint, yet he does it. Adrian Robertson, who paints at Bindi Art (Mwerre Anthurre Artists) in Alice Springs, has several modestly-sized yet striking canvasses holding their own in Talapi’s Desert Colour show, alongside large works by reputed artists of the APY Lands.

The Warlpiri man shows his mother’s country, Yalpirakinu, seething, all but dancing, in rhythmic movement reminiscent of the late Billy Benn, while at the same time defining its forms with strong fluid outlines. They don’t stop the movement but introduce a tension, against which it thrusts. 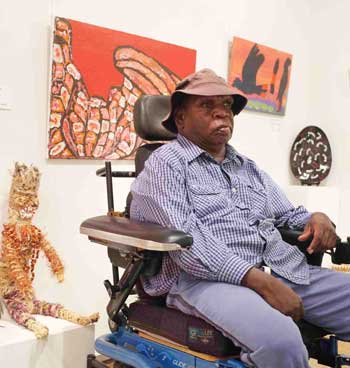 He loads colour onto his brush, somehow managing to preserve the separate pigments while allowing them to bleed into one another. In a predominantly orange toned painting (below), his towering range is incandescent against a brooding sky. In a painting with an implacable red sky (above), the landforms beneath are baked rock-hard, fissured, with the shimmer and glow of embers.

Then we see the country in another mood, still dancing, but cooled down under a white sky. In a work of more earthy tones, the horizon is dominated by a great tree, with all the explosive energy of a mushroom cloud.

Robertson (left, at Talapi yesterday) has been painting with Bindi since 2002 but has a strong artistic bloodline: the late Darby Ross Jampitjinpa was his uncle, the late Eunice Napangardi, his mother, both pinnacle Warlpiri artists.

A large, intricately detailed canvas by Napangardi hangs on permanent display at the Alice Springs Airport. For her the energy of country was translated into a vision of 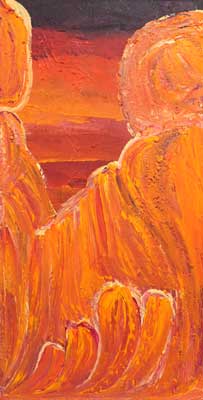 bounty in a subtly muted palette, with the flowering bush banana a dominant motif. For all their scale, her canvasses are up close, intimate views. Is it painting from memory, as Benn did, once familiar country now deeply missed that leads Robertson to his evocative grand sweeps?

Kate Podger, owner and curator at Talapi, loves his painterliness and notes that there is not a lot of it in the central deserts. She gives pride of place in her hang to another fine exponent, Barbara Moore, last year’s winner of the General Painting prize at the NATSIAAs, working at a larger scale than Roberston, with larger, loosely suggested motifs, a lusciously warm, creamy palette and broad sweeping brushstrokes.

These works contrast strongly with the complexity of detail and the tightly organized compositions in the work by other APY artists (Moore is an Anmatjere woman but lives at Amata and paints with Tjala Arts). Indeed it is hard to discern the hand of Moore in the Tjala women’s collaborative canvas to which she contributed with Wawiriya Burton and Maureen Douglas. Its green hues make a bridge between the work of Tuppy Goodwin to its left, in which fresh greens sprout like new grass after rain, and the lushness of greens flooding Iyawi Wikilyiri’s Pukara, in which desert orange survives as if only on the high ground.

Desert Colour at Talapi in Todd Mall anticipates by a week the explosion of art from the Aboriginal art centres that is the annual Desert Mob, opening at Alice Springs’ Araluen Arts Centre next Thursday evening.