Tell a tourist bureau where to go

Imagine you’re a tourist in town come to “Do the NT” for the first time, and you’re standing on the street corner next to The Residency wondering where to go for information.

This sign (below left), in very good condition, points in a southeasterly direction along the laneway to the south end of Todd Mall, and from here you spy a distinctive building on Gregory Terrace, where the Visitor Information Centre is located (below right).

Or rather was … when you arrive at the entrance, there’s a notice advising the Visitor Information Centre is now relocated to Jalistan House (above right) at the other end of Todd Mall at the intersection with Parsons Street – which is just one block away from The Residency where you started.

This typical oversight is highly symbolic of the history of government tourism offices in Alice Springs.

There was great fanfare for the long-delayed official opening of the relocated Tourism NT headquarters and Visitor Information Centre at Jalistan House on June 28, 2013.

Fifty years ago, on May 13, 1963, the doors of the Northern Territory Government Tourist Bureau opened in Alice Springs for the first time, renting space in a group of shops owned by Chinese menswear retailer Charlie Quee at 41 Todd Street. 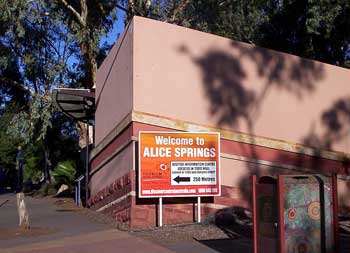 The saga began with the passing of an ordinance by the NT Legislative Council in April 1962 to create the Northern Territory Tourist Board.

The board’s headquarters were established in Darwin, with a bureau office opened in Alice Springs the following year. A well-traveled young woman from Melbourne, Leila Estelle Cropley, was appointed the first manager – she had previously worked for Ansett-ANA in Alice Springs.

In 1964, A. L. “Paddy” Ethell commenced work as a local newspaper journalist in Alice Springs, and was appointed editor early in 1965.

Ethell published a long editorial on May 13, 1965 (exactly two years after the tourist bureau opened in Alice Springs) critical of the performance of the NT Tourist Board and advocated the relocation of its headquarters to Alice Springs.

This was rebutted by Tourist Bureau Director, David Williams, in a lengthy reply published in full – a situation virtually unheard of in today’s “Information Age”.

But moves were afoot, for in 1964 the government-owned Trans Australia Airlines (TAA) bought Charlie Quee’s properties in Todd Street, and the next year announced a major redevelopment of the site.

This meant the Tourist Bureau had to move – which it did, directly to the opposite corner in the still new Ansett-ANA offices at 46 Todd Street (location pictured at left).

TAA opened its new office building in January 1966, and in due course the Tourist Bureau returned to share space in the Commonwealth government-owned property.

In February 1969 the Australian Tourist Commission engaged a team of consultants to inquire into and make comprehensive recommendations for the future of the tourism industry in Alice Springs and Central Australia.

The consultants were US firms Harris, Kerr, Forster and Company; and Belt, Collins, and Associates, which together had extensive expertise in “national park, resort, and regional tourist development planning in North America, the Caribbean, the Pacific Islands, and in South East Asia”.

The landmark 211-page “Tourism in Central Australia” report (or “HKF Report”) was released in December 1969; and amongst its many recommendations was the establishment of a visitor information centre at Colacag Park (the block occupied by the Civic Centre, bounded on one side by Gregory Terrace), and the relocation of the NT Tourist Board’s headquarters from Darwin to Alice Springs.

Initially neither of these recommendations was acted upon. However, in 1970 the NT Housing Commission announced plans for a new office complex in Parsons Street. Initially it was to be a double-storey building but the Australian Broadcasting Commission prevailed upon the Housing Commission to add a third level to provide space for a radio and impending TV studio. 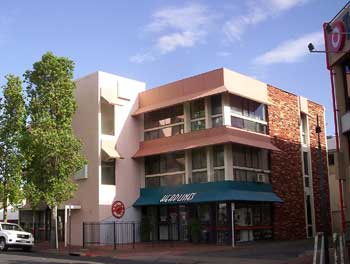 The new building “Stuart House”, at 9 Parsons Street (at right), was opened in July 1972 (now called “Deloitte House”); and in addition to the Housing Commission and the ABC also housed the Crown Law office – but the main tenant was the NT Government Tourist Bureau.

On Christmas Eve, 1974, nature intervened when Cyclone Tracy demolished Darwin, forcing many government offices to relocate to other centres; and thus (by default) the headquarters of the NT Tourist Board moved to Stuart House in Alice Springs.

Following the granting of NT Self-Government in 1978, the NT Tourist Board was duly replaced in December 1979 with the Northern Territory Tourist Commission. The new Tourist Commissioner was Eric Poole, who resided in Alice Springs; and the senior marketing manager, Bob Doyle, was also based in the Alice.

In February 1981 the NT Tourist Commission shifted to two new premises in town – the headquarters were moved to the upper level of the CAAMA building at 99 Todd Street while a shop-front office (still called the NT Government Tourist Bureau) was opened at 51 Todd Street, next to the National Bank.

All of which sounds strangely familiar in light of the new slogan “Do the NT” for which Tourism Minister Matt Conlan claimed “the new brand is designed to be edgy”.

With the commencement of the construction of the fully pedestrian Todd Mall early in 1987, the Tourist Bureau shop front was moved to the Ford Plaza (also under construction) in March – once again on a corner of Todd Mall and Parsons Street.

By 1988 the tourist industry was booming in Central Australia; and the Tourist Commission headquarters in the CAAMA Building had become cramped with 38 staff members.

Bob Doyle was the Tourist Commissioner; having replaced Eric Poole in 1986 after Poole was elected the CLP’s Member for Araluen.

The Tourist Commission cast about for new accommodation but, after apparently finding nothing suitable, the NT Government awarded a contract to Sitzler Bros. in January 1991 to construct a completely new office building on a vacant site at 67 North Stuart Highway (at right). Built at a cost of $2.4 million, the brand new NT Tourist Commission headquarters was officially opened to great fanfare in February 1992.

The building was named in memory of Peter Sitzler, who died a month before its opening – Tourist Commissioner Bob Doyle stated the building’s design had been Peter Sitzler’s vision to enhance the north entrance into town.

However, one week prior to the building’s official opening, Chief Minister Marshall Perron and Tourism Minister Roger Vale (the Member for Braitling in whose electorate the new building was located) announced a major inquiry into all aspects of the operation of the Tourist Commission.

By this time the NTTC had grown substantially, with tourist bureaus located in Darwin, Katherine, Tennant Creek, Alice Springs, Brisbane, Sydney, Melbourne, Adelaide, Perth, Los Angeles, Tokyo, and London. But the good times were over.

From 1989 NT tourism went into steep decline during the disastrous pilots’ strike, followed by a severe economic recession that gripped the nation in the early 1990s. Indeed, NT tourism has never recovered fully from those blows.

Queensland tourism expert Jim Kennedy was appointed the chief consultant for the inquiry; and in early July 1992 he presented the bombshell 103-page report “Northern Territory – The Way Ahead” (also called the “Kennedy Report”).

Amongst the report’s many recommendations – almost all immediately acted upon – was the relocation of the Tourist Commission’s headquarters from Alice Springs to Darwin. The new Peter Sitzler Building became the base for the Northern Territory Holiday Reservations Centre operating on a seven day week 24 hour basis, replacing all the former tourist bureau offices.

The Australian Tourist Commission was given responsibility for marketing the NT overseas.

Adding to the irony is that the NT Housing Commission moved into the Peter Sitzler Building with the Holiday Reservation Centre, just as it had once shared the former Stuart House in Parsons Street with the Tourist Bureau.

But the ultimate irony is that some two decades after the CLP Government had shifted the NTTC’s headquarters to Darwin, the new CLP Government in 2012 announced the decision to reverse its predecessor’s action by relocating Tourism NT’s headquarters back to Alice Springs. And for exactly the same reasons!

In the process of doing so, however, the NT Government completely ignored re-establishing Tourism NT into the government-owned building purpose-built for it at the cost of millions of taxpayers’ dollars, and instead moved it onto the exact site where the tourist bureau first opened its doors half a century ago, once again paying rent for the privilege.