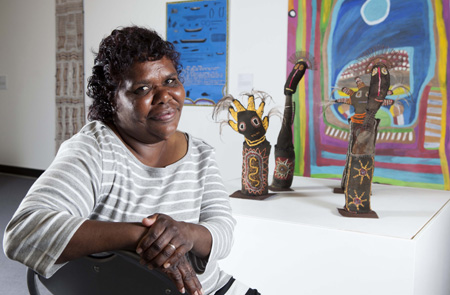 Rhonda Napurrula Sharpe (at left) , one of the leading Yarrenyty Arltere artists from the Larapinta Valley Town Camp in Alice Springs, has won the Wandjuk Marika Memorial 3D Award, for her work They Come From No Where.

Rhonda Sharpe’s entry was described as “vibrant and quirky” by the judges. Her “soft-sculpture alien spirits, Sad, Worried, Frightened and Hopeful (below right), tell a captivating story that resonates with the realities of town camp life,” they said. 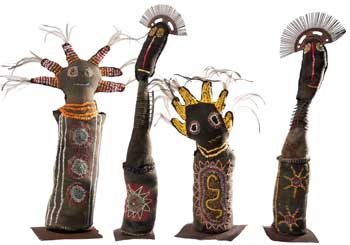 The judges were Indigenous artist Destiny Deacon, Curator of Indigenous Australian Art at the Queensland Art Gallery Bruce McLean, and Director of Museum and Art Gallery of the Northern Territory (MAGNT) Pierre Arpin.

The NATSIAAs, now 30 years old, are the only national art awards open to all adult Indigenous artists. The work of all 76 finalists is on show at MAGNT till November 10. It can also be viewed online.

The other winners of their respective categories are: 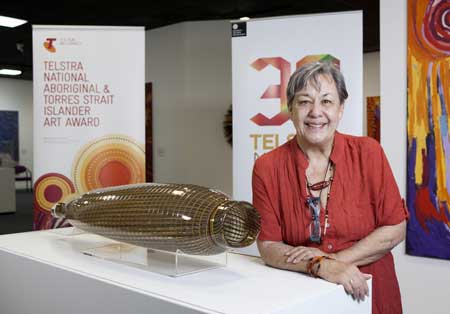 Said Telstra Chief Financial Officer Andrew Penn: “We are proud to have met and profiled so many uniquely talented artists through our 22 years of support for this Award and are committed to ensuring these incredible stories and artworks are seen and heard on a national scale.”

As part the 30th anniversary celebrations, 50 artworks from the Telstra Collection, including works from this year’s winners, will be made accessible to new audiences through an exciting collaboration with the Google Art Project, he said.

Since launching in February 2011, the Google Art Project has given people around the world access to more than 40,000 works selected from collections held in 261 museums worldwide including Tate Britain, Museum of Modern Art, The Van Gogh Museum, The National Gallery in London, the National Gallery of Australia and the Museum of Contemporary Art in Sydney.

Annie Baxter, Head of Communications for Google Australia, said the collaboration will allow audiences to experience the extraordinary talent of the very best Indigenous artists in the country.

Town camp artists do it their way