Once a year a small remote town north-west of Alice Springs is the place to meet the top crop of young men in the nation’s desert centre.

But their glory is brief: when the Yuendumu Sports weekend is over they go back to the depressing idleness to which Australia consigns them, languishing on the dole or being under-employed.

After an emotional start yesterday the Sports got into full swing today with 16 teams, some from hundreds of kilometres away, taking to the red dirt footy field – not a trace of grass – for the Australian Rules carnival. They played a round of two 20-minute halves with the grand final on Monday or Tuesday.

The players’ determination, skill and strength delighted the crowd sitting in their cars or in the dust around the oval, watching the miracles these young men, some barefoot, performed: their legendary skills moving the ball low to the ground, at dazzling speeds, and sometimes taking the screaming marks which have elevated some to national league sides. 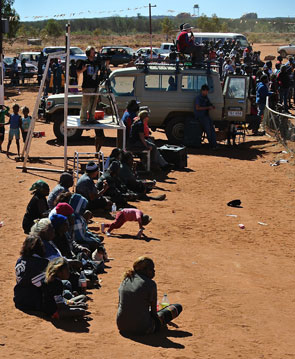 What can they look forward to when they return home in their crowded mini buses on Monday or Tuesday? Not much.

We surveyed the current employment of the players from some teams, each with 25 to 35 players. We spoke to the team managers, coaches or captains. Some were not keen to reveal much and needed quite a bit of prompting – but the waste of talent is so overwhelming that it cannot be ignored.

The photo above shows the team from Cockatoo Creek 50 kms north-east of Yuendumu. According to captain Elijah Jones, only one player has a job – in aged care.

Captain of the team from Nyirripi, west of Yuendumu, Urich Wilson, says of the 25 players, nine to 12 young men work at the Mt Theo outstation, a facility to rehabilitate petrol sniffers. Three or four work at the store.

Manager of the Libanangu Hawks from Kintore, Randall Wilson, says his players are either on the dole or on CDEP, a work for the dole scheme under which people usually perform menial tasks part-time.

Of the Anmatjere Cowboys, north-east of Alice Springs, two are field officers for the shire, one works for the Sports and Recreation department and one in the store. The rest are “on some sort of CDEP training,” says Captain Alwyn Daniels.

Leo Watson, the captain of the Docker River Eagles, from the south-western corner of the Territory, says five of his team have jobs with the shire “picking up rubbish”, one works in the store and one as an assistant teacher at Hermannsburg, hundreds of kilometres from Docker River, 120 kms west of Alice Springs.

Mervin Brown, the captain of the Ampilatwatje side, north-east of Alice Springs, says all his players are on CDEP, “cleaning the streets, picking up rubbish”.

Yuendumu is the only place where all players have jobs, according the Francis Kelly, an organiser of the carnival and a founder of PAW, the local Pintupi Anmatjere Warlpiri Media association – now 30 years old.

Mr Kelly says eight or nine of the players work for the shire, seven for PAW and 23 to 24 for Mt Theo.

Below: The Kintore Hawks (stripes) versus the Pikilyi Bombers.