Getting all steamed up over water 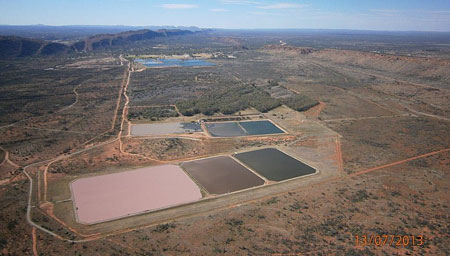 Water restrictions should not hamper economic development in Alice Springs. That has been the view taken to the town’s Water Advisory Committee since its inception by its members from the Town Council and the business community.

At left: Commonage sewage ponds, courtesy Bob Taylor. While we are arguing about water supply in 300 years’ time, we waste three billion litres a year by disposing of sewage through evaporation, at the Alice Springs treatment plant south of The Gap.

Anne Pye, former water planner with the Department of Land Resource Management, resigned at the end of June – judging by a leaked farewell letter to her colleagues – “because it is becoming impossible to see the benefits of my work” when the NT government decreed that the water availability for the town should be assured for 200 rather than 300 years.

She took the view, as does committee member Jimmy Cocking from the Arid Lands Environment Centre (ALEC), that the government’s move is acting in disregard of community opinion. This is clearly far from the truth.

According to the committee’s website there were since April 2008 just 12 meetings, to none of which the public was invited, but which were open to the public. The committee recommendation to maintain the 300 year cap within a draft water allocation plan for Alice Springs was released for public comment earlier this year. It is believed that of the seven responses the Government received, five were supportive of the draft Plan and two were not.

Alderman Murray Stewart, on behalf of council representing the entire town, attended half of them. He was replaced by Councillor Steve Brown in 2012. Only one meeting was held in that year. Cr Brown went to attend but could not find the venue at which it was held.

The meeting proceeded nevertheless and recommended that the 300 year cap to be maintained.

Although Cr Brown repeatedly explained the circumstances of his absence, he has been accused of being indifferent to the committee’s functions by some of its members, including by Mr Cocking, and by Ms Pye in a clear reference to him in the farewell letter to her colleagues.

Following the announcement of the 300 year cap Cr Brown started a vocal – and ultimately successful – campaign for it to be lifted.

The other committee member representing a broad section of the community is Steve Shearer, from the Chamber of Commerce and Industry, the organ for the town’s businesses most likely to be affected by water restrictions.

Mr Shearer is the committee’s current chairman, has acted as chairman intermittently in the past and attended seven of the 12 meetings since April 2008.

He says water restrictions were not stopping any development at present and had never done so in the past.

However, the thrust of his submissions to the committee had always been that if there was “a blockage to any future development, then the water plan needs to be reviewed”.

Former alderman Mr Stewart says he always regarded water planning as a “moving feast” with policies being adapted to need, as well as evolving supply and conservation technologies, especially if the time frame is 200 to 300 years.

“We should not stop industries from setting up in Alice Springs so long as they are applying best practice in water usage,” says Mr Stewart.

“We can’t afford to hold the town back and we can’t have ideologues to tell us what to do.”

He said his brief was to keep the Town Council informed about the business of the Water Advisory Committee and he had done so, reporting back from time to time, and there had been “very little dissension” in the council.

He also felt that whilst encouraging people to save water, to say we had an assured supply for 300 years was counter-productive: “Why are we getting into a tailspin over water? The conservation message is being diluted by the message we don’t have to worry about water.”

It is noteworthy that Tourism Central Australia is absent from this line-up, given that the industry is doing its best to claw back the 50% loss in trade over the past 10 years.