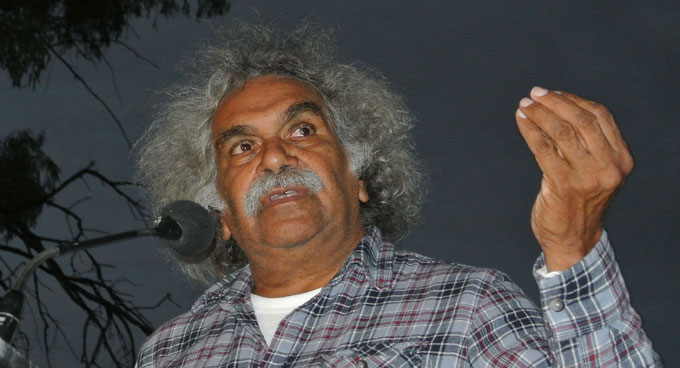 A 50% not 10% royalty for Aborigines from mining anywhere in the Territory, not just on the half under granted under land rights; immediate distribution to traditional owners of the Centrecorp assets worth tens of millions of dollars; and a five billion dollar national future fund as compensation for Indigenous people: these are part of the fiery agenda of Maurie Japarta Ryan (pictured).

He is the new chairman of the Central Land Council (CLC) and the founder, 32 years ago, of the Australian First Nations Political Party which is putting Rosalie Kunoth Monks OAM as number one on its Senate ticket. Mr Ryan says his functions in the CLC and the party are two roles which he will keep strictly apart.

He has a six year history as a CLC member, some of them serving on the executive and as vice-chairman.

He describes himself as a human rights campaigner with the following complex lineage: “Malgin, Gurinji, Mudbara, Narroman, Bilinari, Warlpiri and Irish – and about 38 to 40 other tribes. I am 2400th generation Australian. I have been elected chairman of the CLC for the next three years by 90 elected members.”

RYAN: At the moment the CLC exists not to protect the Aboriginal people but to protect mining companies.

NEWS: Miners are now obliged to pay 10% statutory royalties if they are on Aboriginal land. How much should they be paying?

RYAN: I want every company that is mining in Central Australia to pay more than that. 10% is nothing. I want at least half-half, to be realistic – half-half.

NEWS: Is that for mining companies operating on Aboriginal land or anywhere in Central Australia?

RYAN: I am saying the whole of the Northern Territory.

RYAN: Why not? Most of our mining products go overseas. Those companies can pay 50%.

NEWS: What are the other issues within the CLC you feel need to be tackled?

RYAN: We need to sit down and work out who benefits – the Aboriginal people, traditional owners, instead of looking after the mining companies. Say it was your land, and there was gold or uranium underneath it, would you allow a mining company take 98%?

NEWS: If somebody finds gold on our family’s two hectares we’d get nothing except compensation for disturbance. Can we please move on to Centrecorp, the investment company of which the CLC has a three-fifths share. How much is that share worth? It is said to be tens of millions of dollars.

RYAN: I wouldn’t have a clue. I need to sit down with the administration arm of the land council and ask these questions. I know we have a share in Centrecorp, the biggest percentage.

NEWS: As a matter of policy, do you think the Centrecorp assets should be distributed to the traditional owners?

RYAN: The CLC is the shareholder and it represents 45,000 people. I don’t get any dividends at all. If it is a business it should show a profit or loss and who gets it.

NEWS: That’s the question I’m asking you, who should be getting it?

RYAN: If it’s the CLC who is the biggest shareholder it should go there, to divide amongst the traditional owners of Central Australia.

NEWS: And when should that take place?

RYAN: Well, it should have been happening all the time. That’s how businesses work.

NEWS: In June 2000 we published a report quoting CLC staffer Toly Sawenko and headed “Land Council seeks ground breaking deal” which was about a $9m citrus growing project at Utopia “providing income and employment on a large scale to people on communities currently with massive unemployment”. Nothing has come of that. Last week we reported that Centrefarm, a CLC arm, is starting another project in that region, near TiTree, using a Federal loan and “offering” job opportunities. Do you think public money should be provided only if the unemployed take and hold down jobs in a sustained way, rather than just making making jobs available?

RYAN: I don’t know what happened 13 years ago. I’ve been with the CLC only six years. I’m familiar with Centrefarm but I don’t know the project you’re talking about. I’ve been the chairman only six weeks.

NEWS: Generally speaking, should land use projects driven by the CLC require that unemployed people in the region accept sustained employment?

RYAN: When I put my hand up to become chairperson of the land council, it was on the  grounds of changing the land council, and economic development in remote areas was one of the big things. There is no longer the Community Development Employment Program (CDEP) in communities.

The shires have gone broke. The governments, Federal and State, have let down Aboriginal people many, many times. People talk about the NT as a food bowl. I believe in people growing things, for themselves and their communities. There was a grape farm at Finke. When the shires took over it collapsed. I am a member of Aboriginal Business Australia. We are looking at developing Aboriginal businesses.

NEWS: The Aboriginal mining royalties association, Kurra Aboriginal Corporation, involved in the current TiTree project, in 2011/12 had total accumulated funds amounting to $33.6m. Why should they get government help?

RYAN: It’s the first time I’ve heard this. I don’t know these figures. I don’t check bank accounts of organisations affiliated with the CLC. I can’t tell them what to do with their royalties. I’ve only been chairman six weeks, trying to get my head around how the CLC operates, how it should operate, how it should protect its members.

NEWS: How should it?

RYAN: Everybody knows in all remote communities the Intervention system has failed our people. It is an indictment of the Federal and the Northern Territory governments, not delivering services such as education, health and housing. Land rights has given us 52% of land in the Northern Territory. We need education and health to use it.

NEWS: At present that land is communally owned. Is there a case for individual ownership of land and homes?

RYAN: $672m was spent by the Federal Government on the SIHIP program. Not much of that went to Central Australia. You can buy land in a remote community if you have permission of the traditional owners, and they separate a piece off.

NEWS: Is that buying or leasing?

NEWS: Kurra gets more than $6m a year in royalties. Half is paid to traditional owners and the rest stays with the association. It now owns $34m. Aboriginal people wouldn’t need to buy Aboriginal land. It could be given to them from the pool of communally owned freehold land – half the Territory – and they could then set up businesses on their own land with the cash they have. Why always rely on the government?

RYAN: Two million nine hundred and sixty thousand and three hundred square kilometres – what is that?

RYAN: That’s all of Australia. That land mass belongs to the 550,000 descendants of the First Nations people. I am talking about ownership of the whole country. We’ve got to get that right. Australia’s wealth is off our lands. We are beggars in our own country.

NEWS: What should be done about that?

RYAN: I am the head of a political party. I want five billion dollars as a futures fund. When Peter Costello was in office he put in three billion. I want five. I want an apology for the atrocities inflicted upon my people since 1788. The killings, the murders, deceit, lies, terra nullius. An apology for what happened in the Intervention, the accusations flying around.

I want an apology to the stolen generation of 2000 people. Kevin Rudd said “sorry”. What about compensation for the time we were put in jail, into institutions for 18 years. I was one of them. That’s the things I’m looking at.

NEWS: Can we go back to the 52% of Territory land under Aboriginal freehold. At present it is inalienable – it cannot be sold nor used as loan collateral. Should there be an option of individual ownership, the same way as anyone else in Australia owns land, so owners can put a house on it, a business, an enterprise?

RYAN: I would love to see that, yes. Who is the stumbling block? The governments.

NEWS: The land councils can only lease land to individuals. Should there be outright individual ownership?

RYAN: Let’s talk about this lease. When are the Federal Government and the Queen of England going to pay the lease for Australia since 1788 to the Aboriginal people? This land was not bought. It was stolen.