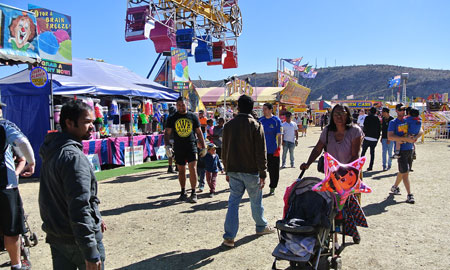 The Show Society is still crunching numbers but attendance was around 21,000 over the two day annual event – not bad for a town of 25,000.

New president Kevin Heintze, heading up a committee half of whose members were also new, says the biggest success in terms of participation and spectacle was the campdraft , running from noon on Thursday to Saturday night.

Competitors on horseback, mostly at full gallop, were driving cattle around a figure-eight course against the clock.

The event was organised by the Red Centre Campdraft and Rodeo Association, run by Mount Riddock pastoralist Rececca Cadzow, which also staged a rodeo on Friday night, drawing a crowd of about 1000.

The camp draft this year left no time nor arena space for the equally skilled bronco branding of previous years.

Mr Heintze says “up” were the ring events including the crowd-pleasing show jumping, and Riding for the Disabled was up a lot, with lots of spectators. Also up were cooking and preserves, and the craft section.

“Down” were the entries in the agriculture and birds sections. Photography was down and the exhibits were smaller.

Changes indoors were the amalgamation of displays by government departments, taking up less space this year.

Police, fire and emergency services had moved to a big outdoor display, leaving another gap in the Greatorex pavilion.

Some interstate colleges did not come this year, and neither did some regulars selling trinkets and other ware, blaming the Global Financial Crisis for their absence.

The outdoor trade displays, too, had fewer interstate firms. Local businesses were there in normal numbers but took up less display space.
The sideshow alley was as big as usual, with the showmen traveling as a group and “doing” the Territory circuit.

Mr Heintze says management of the show was not made easier when on the main day – Friday – Telstra mobile phone communication blacked out, the very way show officials relied on for keeping in touch. The show society computers ground to a halt for the same reason, depending on Telstra for their WiFi.

“Telstra told us they were having a slight problem with mobile phones in Alice Springs,” says Mr Heintze. “I’d like to know what it’s like when they have a major problem.”