Passing through light and time 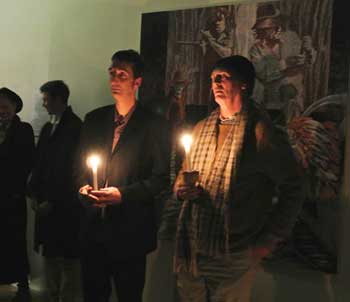 Rodd Moss may mostly paint by the hard light of day, but the retrospective at Araluen covering his work in Alice Springs over three decades opened by candlelight and in an atmosphere of reverence. Why did this feel so fitting and potent?

The opening crowd of perhaps two hundred entered the darkened gallery, paintings on the walls dimly apprehended by a shaft of light from the foyer and the flickering of candles held by Moss and a friend. Slide guitar ceded to a rising and falling cello, a music of mixed sadness and joy, of longing. Moss and his friend began their walk, the crowd parting as they passed, acolytes coming forward, taking light from them. More candles flared, more images emerged momentarily from the shadows. The men walked on.

At the far end of the gallery – and it did seem far – they reached Margaret Kemarre Turner OAM who was waiting for them. They passed her their light. In her taking it, it was as though this indomitable, generous spirit, senior Arrernte woman, gave them her blessing and this blessing transmitted to everyone in the room and beyond, to all that is good and hopeful that can pass between people in this loved and testing place. 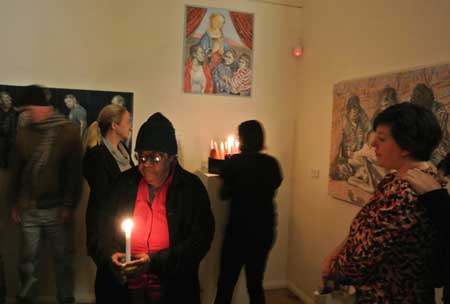 She passed light then to her great-grand-daughter who lit the final candles beneath the painting Madonna of Larapinta. Moss spoke quietly, an offering of thanks. Mrs Turner thanked him in turn for “the beautiful images”, the tears running down her face. No more was said.

The ceremony was devised by Craig San Roque, who has a rare gift for orchestrating moments of community well-being and focussed thinking. He spoke the next day of wanting the experience to slow down time. It did this and so opened up a space to think differently about what we would see in this exhibition, to go beyond the usual appreciations and judgements.

It also somehow worked to encapsulate time’s passing, and with it life, like the flickering in and out of darkness of the faces, bodies and places of the paintings, of the people present, all half-glimpsed.

Many of the Arrernte men and women who figure in Moss’ paintings and writings have died, too many well before their time. This loss is distilled in some of his finest works – Funeral at Santa Teresa and Fallen Man. Others though express a palpable vitality and warmth – Games Alley that I reproduce below (as we approach Show Day) is but one example. Moss’ paintings are important acts of remembering this strength, in such danger of being over-shadowed by our understandable preoccupation with suffering.

A further important strand is the charting of his own relationship with his Arrernte friends, and that of his children as well as more tangentially (and not always flatteringly) other non-Aboriginal people of the town. This is one of the places from where he speaks (and paints), in “the overlap” as San Roque has put it, the “contact zone”.

Another place is that of the Western art tradition, particularly of narrative painting. Some of the power of works such as Fallen Man derives from our cultural memory, even if subliminal, of its Renaissance antecedent. San Roque places strong emphasis on this: “Humanity needs a line,” he says in his beautiful comment on the show (available as a printed text to gallery visitors). Moss stands in the line, he follows “the guides, the masterful predecessors … the ones who helped keep a creative and humane thread right down from the beginning of time”.  If we don’t hesitate to agree that Arrernte traditions are worth preserving, we need also not to forget our own.

The exhibition, titled Anatomy Lesson – You. Me. Us., shows till August 11. Moss is the author of an acclaimed memoir, The Hard Light of Day, which won the Prime Minister’s award for non-fiction in 2011. A second book, One Thousand Cuts: Life and Art in Central Australia, is due out in August (from UQP).

Craig San Roque is a psychoanalyst and author of the recently published graphic novel, The Long Weekend in Alice Springs, adapted and drawn by Joshua Santospirito.

Margaret Kemarre Turner OAM is the author of Iwenhe Tyerrtye – what it means to be an Aboriginal person. 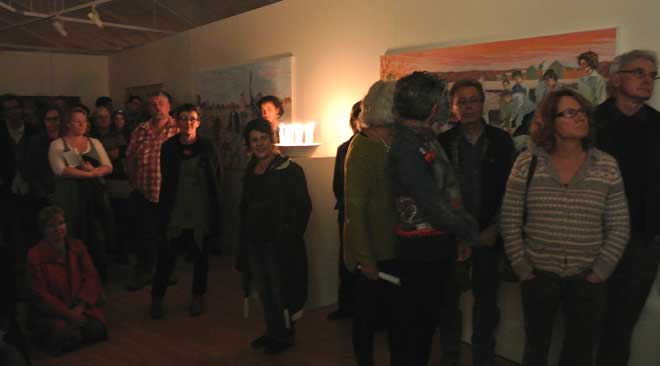