Home Issue 13 Someone is going to die at this crossing, say councillors
Issue 13Issue 14Volume 20

Someone is going to die at this crossing, say councillors 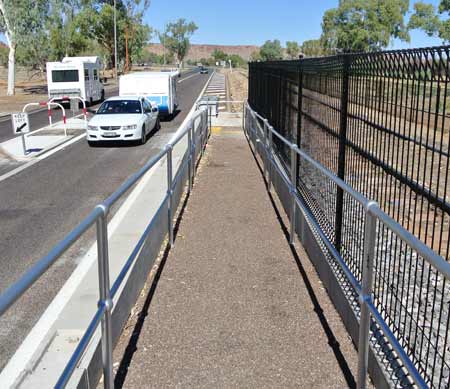 It is only a matter of time before someone will be killed at the new pedestrian crossing just south of Heavitree Gap, councillors told MHR Warren Snowdon when he attended their meeting last night. Deputy Mayor Liz Martin said she has seen children on three or four occasions jumping from the top of the ramp wall onto the highway. She said she also observed a “near fatal accident” involving a triple road train, which could have claimed many lives. The design of the crossing needs to be reviewed “with some urgency”, she said.

UPDATE, June 12, 2013, 4.40pm: This is an extract of the email about the near accident that Cr Martin sent to her fellow councillors on the night of June 6:

I have been around a long time and am not too easily scared. However, tonight I had one of the most frightening events I have ever experienced in my life.

As I sat as a passenger in our bus, headed into Alice Springs to take a group of volunteers to dinner we were forced to brake hard
when about twenty Aboriginal people had clustered on the ramp leading to the walkover / island on the Stuart Highway between
Little Sisters and Heavitree Gap Store.  One Aboriginal women ran onto the road causing the interstate visitor in the car in front of us
to screech to a halt – which in turn caused us to do the same. We stopped within inches of the car.

Then we heard the ominous sound of an airhorn blaring as a fully loaded three trailer roadtrain came up behind us attempting to stop before he ran into us. As we know, roadtrains don’t stop too easy without notice.  Fortunately we were able to pull out into the path of
“thankfully none too close” oncoming traffic. By that time all we could see was the Kenworth’s bull bar and bonnet emblem  in our
back window he was that close.  This terrified us all but particularly the interstate visitors in the car in front. They were so shaken by
the incident they had to pull off the road before they got to the roundabout.

We (this town)  could have had a multi-fatality accident there tonight. Amazingly, it all happened so quick I can not even tell you whose roadtrain it was except it was a Kenworth with three.

Cr Brendan Heenan and Mayor Damien Ryan joined Cr Martin in expressing concern to Mr Snowdon. Cr Heenan told Mr Snowdon that Australian Government “Black Spot” funding had been applied for after “an Indigenous lady” was killed, crossing about 100 metres further south from Little Sisters camp to the Heavitree Gap store. He said this was the place that people had been using for years as the shortest route between the camp and the store.

Cr Heenan said the ramp had been built in the narrowest part of the road. He said he had been told that it was designed by Darwin-based engineers and that local engineers disagreed  with their approach; that it had been built over the gas line and had to be dismantled and rebuilt, putting it, he understood, well over budget.

Mayor Ryan said the issue must be addressed as traffic through the Gap is only expected to increase as housing is built in the new Kilgariff subdivision.

Mr Snowdon, who appeared to be unaware of the new crossing, said he would look into it.

The mayor also asked Mr Snowdon about funding for a proposed “suspended walkway” on the eastern side of Anzac Hill so that about one thousand more people could be accommodated at the centenary Anzac ceremony in 2015. Council has costed these words at $.5m. Mayor Ryan said there is renewed interest in the ceremony, especially amongst the youth of the community. He said the walkway would be a great investment for tourism as well.

Mr Snowdon referred to the various sources of funding Australia-wide to support state and territories’ projects for the centenary. The most prospective fo 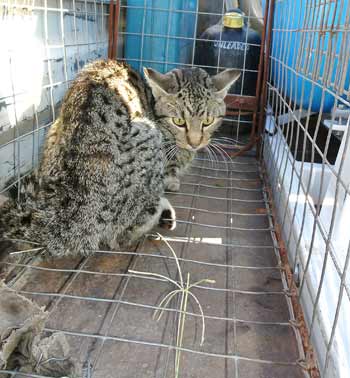 r the council is likely to be private funds being raised by Lindsay Fox (founder of the Linfox group) “tapping business on the shoulder”.

The council is fielding 20 to 25 calls a day about feral cats, director of Corporate and Community Services Craig Catchlove told councillors last night. Cr Heenan was pleased to see that 120 cats had been impounded and put down in the month of May. He said he had caught 48 in two traps at his MacDonnell Range Caravan Park. Mr Catchlove said council has ordered more traps as they can’t keep up with public demand. It’s a “huge issue”.

Cr Jade Kudrenko queried the design of the revamped northern end of the mall after visiting it for the Sunday markets with a pram in tow.

She said anyone with a pram or wheelchair would find it impossible to access the stalls because they were set up too close to the step up from the road. She suggested stall-holders be given guidelines about where to set up to allow better access.

She also wondered whether the current state of rumble surfaces on the road was the finished product. As is, they are a “tripping hazard”, she said. 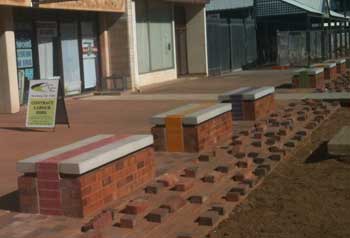 Cr Eli Melky also reported that a woman had tripped on the raised brick surfaces (at left)  in Parsons Street, on the garden side of the benches. The woman cut her head. Cr Melky mistook the raised bricks for a work of public art. Cr Kudrenko corrected this impression, saying it was part of an irrigation system.

The Lane restaurant to return

Popular mall restaurant, The Lane, looks set to reopen under the management of its original owner, Vin Lange. Councillors unanimously supported the recommendation not to object to an application by Mr Lange for a liquor licence.

Liquor will be sold on premises “ancillary to a meal”. Hours of trade applied for are seven days a week, from 12 noon to 2am.

Most councillors seem to be backing the request for cash ($10,000) and in kind support from the Darwin Symphony Orchestra to give a free concert in Alice Springs after its performances at Uluru in October. Only Cr Melky seemed sceptical, wanting to know what the financial return to council and the community would be.