Work snags: Rock star expectations instead of proving themselves 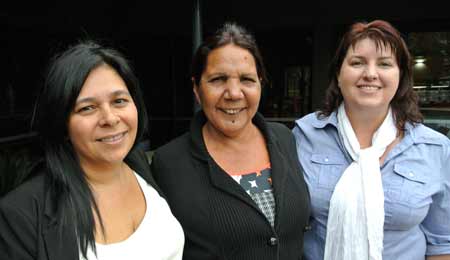 With 65 employees, nearly 70% of them Aboriginal, Ingkerreke Commercial is on the leading edge of Indigenous business.

Manager of Scott McConnell (at right), born and bred in The Centre, says the company tackles jobs in town and out bush, from metal fabrication to building houses.

The tag “commercial” means the business is on a level playing field with other privately owned firms, and does not benefit from government funding which Ingkerreke Outstations is getting.

Mr McConnell thinks local businesses are staring a tough time in the face – but he’s not fazed.

With the Federal millions of the SIHIP housing project now a thing of the past – $650m in the bush and $150m for town camps – the fly-in, fly-out brigade and interstate contractors are likely to have done their last fly-in for a while, leaving the local jobs to local firms.

And he says the 10-year, $5.5 billion National Partnership Agreement on Remote Indigenous Housing (NPARIH), which is building new houses and refurbishing or rebuilding existing ones in remote Indigenous communities, is on track to meeting expectations: it is NT Government managed, and will offer jobs to Indigenous people more readily than did SIHIP.

Interviewed by the Alice Springs News Online at the launch by NT Minister Alison Anderson yesterday, Mr McConnell said there are two vital requirements for black and white to work together in Alice Springs: business managers need to pay more respect to Indigenous people, and young Aborigines shouldn’t have expectations “like Rock stars,” expecting excessive pay and conditions before they prove their worth to their employers – an attitude bred by government welfare pampering.

“They don’t need wash-down stations” on the approach roads to Alice Springs – a swipe at Councillor Steve Brown’s proposal for “Welcome to Town” centres.

They need some special consideration: “Aboriginal people need to attend lots of funerals, for example. But this is not insurmountable.”
And people from out bush visit families at certain times of the year. Ingkerreke has strategies to deal with that, but they are less costly than employing people from interstate, paying their airfares and accommodation in Alice.

“True, we have an issue where the welfare bar is set, how Centrelink administers the welfare rules.

“I have lived here all my life, was brought up and worked on cattle stations. They were dependent on an Aboriginal workforce. 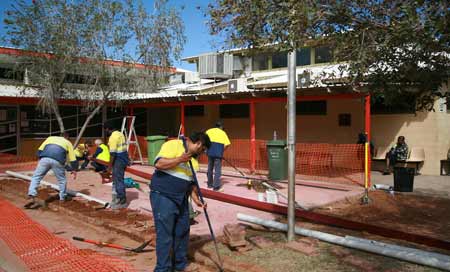 “If I now go to a roadhouse, a cattle station, a motel in town, a supermarket, I will find lots of 457 Visa holders and backpacker employees.”

What are the Aboriginal people doing to get these jobs?

“If something goes wrong in someone’s life we’re encouraging people – and not just Aborigines – to look whose fault it is.

“They are not selling it well because we have the whole engine of government telling people about how you need more training, you need more flexible hours, more staff amenity. It is absolutely out of control.

“What do I need to make myself saleable – that’s not what young people are asking themselves.

“What you need to do is get working, and once you have a value to an employer they will look at providing some of these things. But you can’t expect it from day dot, from zero.

“Some potential employees think they are Rock stars. Young people with very little skill base want to be started at a very high level.

“The economy in Central Australia has been doing very well for a long time, with very little competition. The environment is changing now. People need to adapt to that.

“We have a whole system of government standing between people seeking a job and employers.”

What’s ahead in the next 12 months? The new government has a good handle on tourism, “not like the halcyon days of Crocodile Dundee” but better than recently. Tiger is flying, and “we’re looking at a good sustainable base, going up over time,” says Mr McConnell.

There will be a lot of remote houses under NPARIH, administered by the NT Government “through a more standardised procurement practice, better than SIHIP. That’s good.”

Ingkerreke won the contracts for two houses at Papunya and one at Canteen Creek.

“The focus on employing Aboriginal people in these communities is really high. I like that. SIHIP made out they were doing that as well, but somehow it got lost in the translation.”