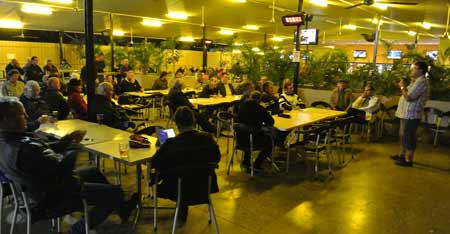 It spells the end of small builders in the Northern Territory, blocks young builders from entering the industry, opens the door to construction giants from interstate, harms local suppliers, it is intrusive, undemocratic and doesn’t do for the home buyer what it claims to be doing.

That’s what 30 builders and builder suppliers, at a meeting last night, thought about the Master Builders NT Fidelity Fund. They called for the repeal of legislation that set up the scheme.

The often heated meeting at Club Eastside accused the Master Builders Association (MBA), which administers the program and gets an undisclosed fee for it, of selling out its members. Organiser Jamie de Brenni said Chief Minister Adam Giles, when he was still an Opposition member, opposed the scheme which was brought in during the dying days of the Labor Government last year.

But a government spokesman, Steve Popple, last night defended the scheme, saying it was set up in the wake of huge losses caused to home buyers by builders such as Randal Carey, and is the result of a consultation process that started in 2006 but was widely ignored by builders.

However, the scheme’s regulation 15 states under the heading “Financial loss not required to be covered by policy,” in point (m) “fraud or dishonest conduct of any kind by the builder”. This was pointed out by Dean Chambeyron, the regional manager of the national Housing Industry Association, a competitor of MBA, who was at the meeting.

Mr Popple told the Alice Springs News Online after the meeting that “the fund would consider claims on a case by case basis as it depends on the nature of fraud and dishonest conduct by the builder”.

The new regime, replacing the Home Building Certification Fund, outlaws charging deposits greater than five per cent of the total costs and making progress payments in advance of the completion of stages.

The fund “issues residential building cover to builders through fidelity certificates, which provide consumer protection for owners of new homes and extensions to existing homes,” says a brochure.

“The Fidelity Certificates will cover owners against financial loss because of incomplete or defective work if the builder disappears, dies, becomes insolvent, or becomes deregistered.

Speakers at the meeting claimed that buyers are being led to believe that the scheme would guarantee the completion of their homes whereas it does not.

However, Mr Popple says the fund monitors progress payments, and if the builder fails at any stage, only the work that has been performed has been paid for by the buyer.

The fund will provide up to 20% of the contract sum for non-completion.

The maximum for non-compliance with the National Construction Code of Australia is $200,000, for example, if a builder has underquoted and the work remaining to be done is more expensive.

A major gripe of the builders is that they must provide personal guarantees for the work if their annual turnover is less than $1.5m.

“Are you risking your home every day you go to work?” a speaker asked Mr Popple.

As a rule of thumb, the guarantee must match the value of the job and, and remain in place for one year from completion, builders told the Alice Springs News Online. That means once the limit of a builder’s guarantee obligations has been reached, he’s got to stop working.

The guarantee requirement rules out young tradespeople entering the industry, it was claimed, denying them the chance to build up assets in the first place.

However, Mr Popple says: “Builders are not required to provide any guarantees. This is a major misunderstanding.

“The fund limits the value of projects at any one time, in line with a builder’s capacity of carrying out that work.

“The builder can turn over that limit as many times at any time. If the limit, for example, is $1m, then a builder can have only one $1m project on the go at any given time.

“A builder’s limit can be re-assessed as his firm’s capacity increases or decreases.”

The builder remains responsible to fix even the smallest defects, replacing a tap washer, for example, said one speaker.
The seven page application form, so far completed by 250 NT builders, delves deeply into the private and financial affairs of people seeking registration, an invasion of privacy.

A speaker from interstate, Phil Dyer, a Melbourne builder who has fought a similar scheme in his state for 11 years, told the meeting similar “last resort” insurances in other states had been opposed vigorously by the industry, had triggered 47 enquiries and “nowhere else in the western world” was an iniquitous scheme like this in force.

Mr Chambeyron says fees under the NT scheme are generally double of those charged in South Australia.

Suggestions at the meeting included bringing back the HBCF, or having no consumer protection scheme at all, leaving it to the courts to sort out disputes.

The most effective measure, suggested by one speaker as a no-brainer, is not to make progress payments to builders before each construction stage is completed and certified.