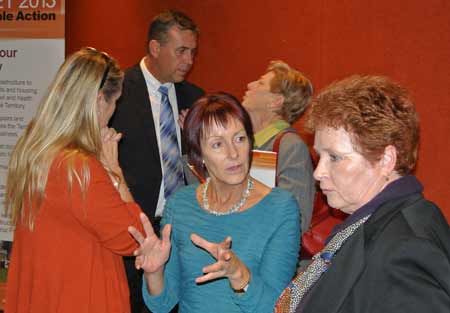 Given that the Territory’s two most powerful men were in the room, question time at the Chamber of Commerce Budget luncheon yesterday was a sedate affair.

The most prickly query came from a builder, Paul, who asked Treasurer Dave Tollner why the government was negotiating with an interstate firm about the $10m redevelopment of the old police housing in Allchurch Street. Mr Tollner said he would investigate; his government is “big on buy local” but at times interstate suppliers are cheaper.

To a question by the Alice Springs News Online about the approximate per capita infrastructure spending in the 2013/14 Budget in the Top End, compared to The Centre, Mr Tollner replied that his staff would provide detailed answers.

But as a preliminary reply he said: “In Alice it’s somewhere along the lines of $3000 per person. I think there are only two regions that exceed that, Barkly and East Arnhem. The lowest spend per capita is of course in Darwin at $990, somewhere around there, per person on infrastructure.”

This will come as a big surprise to those who suspect that the Top End always gets the lion’s share.

The manager of the backpacker hostel Annie’s Place, Denise, asked – sparking some chuckles around the room – whether mining royalties received by Aboriginal people are being taxed.

And chamber CEO Kay Eade wondered if  Growth Town policies would be continued in the bush, providing employment opportunities for kids “who have nothing to do at the end of school”.

Mr Tollner said taxing royalty income is a Commonwealth matter, but he is not opposed to royalties. He said there has been a change in the way they are being managed by the Aboriginal trusts, less “doling out cash” and more investment in education and work opportunities on communities.

Work opportunities could include small businesses such as hairdressers, coffee shops and restaurants, part of a necessary welfare reform.
One of its “most strident” advocates was Chief Minister Adam Giles, who fought his 2007 Federal election campaign with the slogan “no more sit-down money”.

Mr Tollner said access to land and land tenure, on Aboriginal as well as pastoral land, are unresolved issues. For example, 40 year leases are “difficult – the longer the better”. 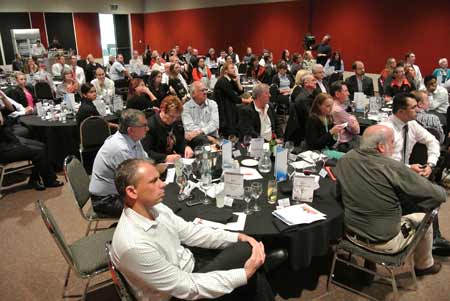 Rosemary Wiese asked about the introduction of social clubs on communities so that drinking is done “not in our streets”. Mr Tollner said major changes to the management of alcohol should come after the establishment of facilities and programs for dealing with its abuse.
It’s not a one size fits all issue: For example, when Arafura MLA ‪Francis Xavier Kurrupuwu‬ proposed full strength beer – not just light – to be available in his electorate, there was a “rivers of grog” outcry. But Mr Xavier was merely trying to stop his constituents from getting into trouble in the streets of Darwin.

Judith Donna said she’s been in Alice Springs 50 years, “watching”. She said she is “pleased the police station is now open 24 hours,” but she wants the police call centre, that currently “has no idea where anything is,” moved back to Alice Springs: “They are taking too long.”
“We are absolutely committed to having a call centre in Alice Springs,” Mr Tollner replied. In the interim, calls will be channeled to the local police station, and if they cannot be taken there, they will transfer to the call centre in Darwin.

Jimmy Cocking from the Arid Lands Environment Centre asked about water management. Mr Tollner replied that the Power and Water Corporation (PWC) had been ordered to act “more creatively” – not just with respect to water but also solar and wind driven electricity generation. The “uniform tariff” style of funding for PWC had provided no incentive to “embrace innovation”.
On the other hand, Samantha, from Inland Electrical, said her firm, in collaboration with the local Bushlight program, mostly Federally funded, had installed some 300 photovoltaic units in bush communities: these are working well and are welcomed by the locals, she said.

The Centralian Advocate queried what was the Budget’s “elephant in the room” and Mr Tollner said it was the Territory’s  disproportionate dependance on Canberra money – nearly 80% of the Budget.

He said it’s a worry to be exposed to Federal governments that can be fickle. The NT Government, looking into “each agency,” had managed to cut spending by $200m without reduction in services.

PHOTOS: Treasurer Dave Tollner with Chamber of Commerce members including, in the foreground, CEO Kay Eade (centre) and president, Julie Ross. • The luncheon crowd with Chief Minister Adam Giles in the foreground.