Marching to the top of the hill and down again 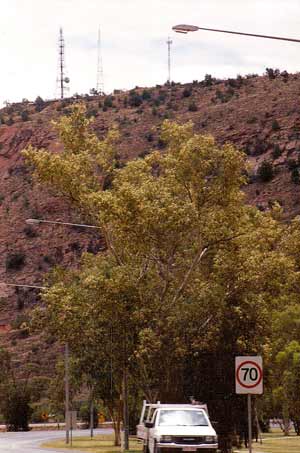 Two news items today are reminiscent of two much earlier events, equally related to each other.
The first is that a new speed limit of 70 km/h will commence today (April 29, 2013) from the Tom Brown Roundabout south through Heavitree Gap to just beyond the turnoff to the Commonage Road on the south Stuart Highway.
This change has been made necessary following the construction of a pedestrian crossing and traffic safety island adjacent to the Old Farm Area causeway, which has been built as a “black spots” funding project.
The second story concerns the NT Government’s protestations against the federal Labor government’s apparent threat to withdraw or hold up funding for the NT unless the Banned Drinkers’ Register is re-instated.
Haven’t we been here before?
First, the “new” 70 km/h speed limit through Heavitree is more a case of being renewed, as this used to be the speed limit from south of the Commonage Road turnoff all the way up Telegraph Terrace to the existing 60 km/h limit just south of the intersection of Traeger Avenue. This time around the current 80 km/h limit on Telegraph Terrace between the Tom Brown Roundabout to Traeger Avenue will be retained but there’s at least an element of deja vu` as far as Heavitree Gap is concerned.
In November 1998 my attention was caught by the prolific flowering of the river gums and ghost gum trees by the Stuart Highway south of Heavitree Gap which I photographed.
By chance I recorded the speed limit signs of that section of the highway then in force – 70 km/h. Some time later the NT Government decided this speed limit was unnecessarily slow and so increased it to 80 km/h, notwithstanding the danger that represented to people who regularly cross the highway near Heavitree Gap. Hence the black spot funding to try and make that section of the highway safer for pedestrians now, and a return to the old speed limit for that stretch of road.
The second news story about the Gillard government threatening to withdraw funding from the Territory Government (CLP, of course) in order to force a change in policy towards re-instating the BDR echoes a remarkably similar situation in 1990, when the then federal Hawke Labor government demanded that the NT Government (then CLP under Chief Minister Marshall Perron) change blood alcohol limit laws to match all the other states in Australia.
Up to this time the NT stood alone in maintaining the old .08 blood alcohol limit while the rest of the nation had gone to the .05 level. If the NT refused to accede to the Commonwealth’s demand, the federal government  threatened to refuse funding being made available to the Territory for a certain program then being implemented across the country – which was for the new black spots funding for road safety projects in Australia.
And it just so happened that the NT not only had the worst road safety statistics by far (per head of population) but was also alone in recording increased fatalities of all jurisdictions in the nation at the time.
The NT Government reluctantly acceded to the Commonwealth’s demands (although the .05 limit didn’t come into force until the mid 1990s) in order not to lose out on that funding.
The Commonwealth had to rattle the sabre again in order to oblige the NT to implement its side of the bargain but it did eventually happen. It was once part of that “Territory mystique” that the .08 blood alcohol limit was one aspect of what made us so distinctive as “Territorians”; but now the .05 limit has been in place for almost two decades and it seems we’re no less Territorian for it.
Now history echoes yet again with the current dispute between a federal Labor government imposing its policy will on a reluctant CLP Territory government, again on an aspect of alcohol management.
I’m reminded of that old nursery rhyme: “The grand old Duke of York, he had 10,000 men; he marched them up to the top of the hill, and then he marched them down again”.
It’s enough to drive one to drink.