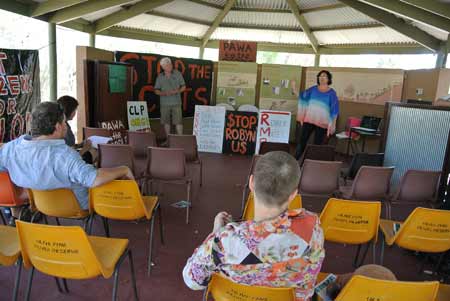 The empty seats don’t tell the story: the handful of people who attended the Alice Springs launch of NT Citizens for Action (NTCA) have their town at heart, and show it in a variety of ways.
NTCA was spawned in Darwin at a meeting of four people December 22 but now has a Facebook site with nearly 1400 members: is public engagement morphing from often drawn out meetings, attended mostly by the usual suspects, into a viral online phenomenon?
Snippet: Two old-timers staging noon-time protests outside Parliament House in Darwin about issues relating to seniors, is attracting public attention quite disproportionate to the size of the “action”.
The expansion of the group to Alice was promoted by Phil Walcott, psychologist and independent candidate for Greatorex in the Territory elections last year. The professed non-party political nature of the group notwithstanding, the small crowd at the ‘in the flesh’ Alice meeting on Saturday was
left of centre, including several local ALP figures.
If it takes off in the town it will be interesting to see how NTCA comes to sit with the established lobbies – the Town Council, the Chamber of Commerce and Tourism Central Australia, none of which seem likely to be manning the barricades anytime soon.
The two hour meeting spent half the time discussing alcohol issues without managing to add much to the noisy and divisive public debate so far. Among the more radical suggestions were calls for take-away alcohol retailers to declare turnover and profit margins as a requirement of their holding a licence to sell liquor and an audit of licensed roadhouses up and down the Stuart Highway to check for over-pricing of product especially to Aboriginal people.
Other worthwhile issues included:-
• Concern that the Congress 24-hour youth drop-in centre, which helped 2100 kids in the last year, may be under threat of defunding or already have been chopped. This was raised by Lauren Mellor and Bob Durnan (who, apart from his day job in community development, scours the internet for news and analysis relevant to the issues affecting Alice Springs and distributes the links to a wide network of interested people).
• ALEC’s Jimmy Cocking said the town may soon lose expertise in the environmental area. Solar City and Water Smart are winding up at the end of the financial year and  Cool Mob’s future funding ($75,000 a year from the NT Government) is unclear. The contribution of these groups should not be under-rated. For example, Alice now produces between 3% and 8% of its electricity from the sun – and 3% is 10 times the national average! Another thought from Mr Cocking: the group would get more points for putting forward good policies rather than attacking bad ones.
• There was opposition to an economic zone being introduced which would bring in foreign workers. No solution was put forward to the pervasive expectation in some quarters that income from welfare is a lifelong entitlement.
• Examining a “workers audit” was urged by Ms Mellor: how bad a thing really is public debt? (See also Letter to the Editor.)
• Is the NT Environment Protection Authority sufficiently independent from mining interests, asked Mr Cocking.
• The hospital ward for the mentally ill is full and the overflow is accommodated in the prison which has no adequate treatment facilities. Depression is “one of the worst illnesses,” said Starr Gotzen.
• Chief Minister Adam Giles will meet with members of NTCFA this week (tomorrow) in what is hoped to be the first of two-monthly meetings, said Mr Walcott.
• Ross Park and other public schools are bursting at the seams, said Adam Findlay, ALP candidate in Araluen last year.
Also present were veteran Aboriginal activist Betty Pearce and her daughter Esther; tourism operator Rob Gane; local ALP president Rowan Foley; ALP figure Jenny Pender and yoga therapist Kalikamurti Suich.
•
PHOTO: Krissi Besic from Darwin and Phil Walcott addressing the new group.

Facebook
Twitter
Pinterest
WhatsApp
Previous articleNo risk from uranium, thorium at mine near Alice: chairman
Next articleLETTER: Mandatory rehabilitation bill must be released for public consultation