A dispute over tour guiding at Ayers Rock may develop into a brawl impacting on the tourism industry nation-wide.
Federal Parks Australia, which runs the Uluru-Kata Tjuta National Park, requires tour guides to be accredited: they have to show a badge at the gate proving that they are.
Some international companies bring their own guides who have obtained accreditation – it only takes a two day course to get it.
However, this requirement of the parks service has put the spotlight on the fact that while the overseas guides may be complying with park regulations, they may be in breach of immigration requirements, because they may not have work visas for Australia.
Jaclyn Thorne (pictured), General Manager of Tourism Central Australia (TCA), says the issues were raised at a meeting at Yulara this week.
TCA members have suggested that local tour operators could sub-contract to take over the tours, or supply local “step on guides” to do the guiding.
In either case the overseas companies would be saddled with extra costs which may be a disincentive for coming to The Centre or – if the problem spreads – to Australia.
She says: “It’s not just an issue for us here, it’s an issue across Australia. There are potentially people working here without the right permits.”
Ms Thorne, who started in her job early this year, says this was an example of TCA’s advocacy role.
Another one is the resolute opposition by TCA’s transport sector to the introduction in the NT of the driver fatigue program which is part of the National Heavy Vehicle Reform package.
“It is going to ruin our business,” Ms Thorne quotes the sector. “We still need to be conscious about it when we cross borders.”
She says a recent “where are we and where are we going” survey of members found they wanted TCA to be, above all, a strong advocate for people in the in industry.
“75% of our members think that representing industry views to government and other stakeholders is very important, and 20% said it is important. That’s the vast majority of our membership.”
She says 81% of the members feel that providing visitor information and services, and selling members’ product, “is pretty much the most important thing we do”.
A new communications staff member will be hired “telling positive stories and having a good relationship with media”.
Is TCA a lobby group that keeps Tourism NT (TNT) honest and are the members happy with the way TNT is doing its advertising?
These questions haven’t been raised in the survey, says Ms Thorne, but Adam Coward, the new head of TNT marketing, “is really changing things.
“In the past the NT has been marketed in awareness campaigns. People are very well aware of what the Territory has to offer. But there have been barriers in getting people to book and come.
“Now you will see an ad, you’ll see an offer and a booking, for example, a five day package, an airline.
“You love this picture, you love this idea; come and book, is the message, trying to convert the awareness into intention to travel.”
When the new promotion kicks in “and we get more people here,” TCA’a role will be to make sure the industry on the ground has refreshed products and has the right trained staff.
“We’re promising them a wonderful holiday. We want to make sure we are delivering it,” says Ms Thorne.
“We concentrate on members and leave marketing to Tourism NT. They drive the demand” while the core focus of Tourism CA is on industry development, capacity building, visitor information services, and marketing in the non-traditional sense through digital media.
There is consultation and brainstorming between the industry and TNT, but “brand values have not been released yet.
“TCA is not about mapping international marketing campaigns,” says Ms Thorne. 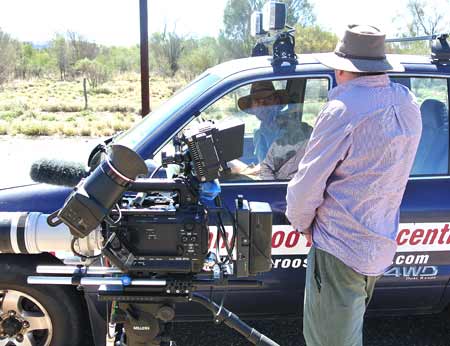 Should Chris “Brolga” Barns (pictured at right), acquiring world fame a Kangaroo Dundee, and currently shooting his second BBC TV series, become The Centre’s poster boy?
No, says Ms Thorne: “We support our members” – and Mr Barns isn’t one of them.
Should TCA do domestic advertising? Only within the Territory.
There is some co-operative marketing with members, she says, such as bundling together some members to share the cost for an advert in an airline magazine.
“I was speaking to someone in Melbourne and he said literally the Territory is splashed everywhere at the moment,” says Ms Throne.
“There is a really big push on the east coast.
“So, regardless of what previous campaigns have been, at the moment there is a huge push, especially in partnership with Tiger.”
The survey earlier this year was responded to by 44 of the 330 members, or 15%, from across the region. This is “on par” with the response rate in other regional tourism associations (Ms Thorns previously worked in the Barossa Valley in SA) and it is reasonable to regard it as a representative sample for TCA.
Half of the people said they had plans for expansion into new products or services in the next 12 months.
Only 63% are bookable online and TCA now has a drive to increase that. She says the vast majority of travel research is online and “more and more people are booking online, although a small number of operators are saying, “we’re just fine not being online”.
Ms Thorne says members want more events to promote their services to each-other, done in trade fair style functions in the TCA building, currently about three times a year. Such an event two weeks ago had eight members showcasing their wares and 64 attending.
Ms Thorne herself doesn’t take any convincing that The Centre is a tourist’s paradise: “Adventure, mountain biking, hiking the Larapinta Trail, the ranges, off-road motorbikes and quads, helicopters, they are positioning us as the adventure capital. We’ve got the right weather, the right landscape.
“Last week I spent a night in the swag under the stars at King’s Creek Station. It was one of the best things I’ve done in Australia – ever.”