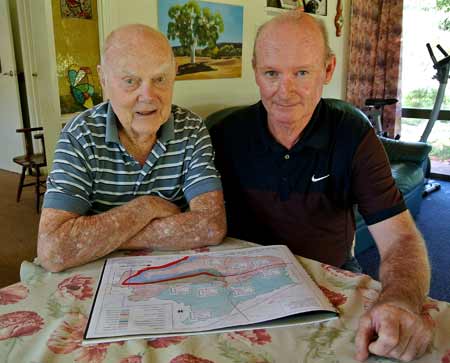 Alice Springs will be consigned to stagnation at its present size and scope of commercial activity if the town’s Water Allocation Plan is adopted in its current draft form.
That’s the view of Steve Brown, the Town Council appointed member of the local group advising the Minister.
That group wants to continue for another five years the strategy formulated in 2007 of making currently known reserves last for 400 years, and keeps in place a cap of 10.7 gigalitres (GL) a year, which has been almost reached now.
Cr Brown says he will move at tomorrow’s council meeting that the Minister, Willem Westra van Holthe, be asked to set aside the draft plan, so a new plan can be draw up that “focusses on development and job opportunities for the neglected Central Australian region”.
The period for public comment ends next Friday.
Cr Brown says it is absurd to block the town’s growth and opportunities for horticulture and agriculture when the water is currently drawn from just one borefield, Roe Creek, and most of the vast Amadeus Basin, stretching some 300 kilometres west of the town, remains largely unexplored.
Not given to mincing his words, Cr Brown says the plan is “a dinosaur from the previous government to stifle development in the south of the NT.
“It is a political attempt to stop growth” and the local Water Allocation Group is doing the bidding of Darwin-based administrations, reluctant to spend money in Alice Springs.
The plan says: “Water drawn from the Amadeus Basin Aquifers is estimated to be between 10,000 to 30,000 years old and contemporary recharge is minimal in the context of the resource.
“This water resource is therefore considered a non-renewable water resource.
“Since pumping began at Roe Creek [south of the town] in the 1960s, it is estimated that some 320 GL has been extracted. During this period the water level at the Roe Creek borefield has dropped from 85 to155 m below ground level.
“Drilling at the Roe Creek borefield in 2009 has suggested that it may not be economically feasible to extract all of the previously estimated storage.
“This may necessitate the main water supply for Alice Springs being sourced from the Rocky Hill area [south-east of the town] by 2035, which is ahead of previous estimates.”
Eminent local water expert John Childs says there is some knowledge about underground water resources at Jay Creek – not plentiful – and Ellery Creek and along the Hermannsburg Road – more promising – but further west there has been practically no exploration.
There is flow between basins in the aquifer, generally beneath the MacDonnell Ranges, but this flow is low and slow.
Dr Childs says the town has several options which could be implemented in a mix-and-match fashion:-
• The town could double its production from the current borefields which would reduce supply from known reserves to 200 years.
• It could learn to get by with less water.
• Most significantly, a state-of-the-art recycling plant, of which there are thousands around the world, would put an end to the massive waste of water in the current sewage treatment plant, and produce drinking-quality water every bit as good as we have now.
• And the 200 years could be used looking for further underground reserves.
Cr Brown says every city and town around the globe enhances its water supply as required: “You don’t just sit there under a siege mentality looking at your last bucket of water. Our region has a huge number of resources,” he says.
His father, Jim Brown, an Alice Springs pioneer, erstwhile supplier of the town’s milk from his dairy at White Gums, and highly experienced water bore driller, says Alice in its early days “had a few waterholes here and there”.
To keep pace with growth, in 1964 the town was about to build a dam upstream from the Telegraph Station – a project revived in 1992 but blocked by the Federal Government in response to a sacred site dispute – when oil explorers found the Roe Creek water basin by sheer chance.
Cr Brown says at worst – in terms of costs – Alice could access the Ord River Dam to the north, or the Great Artesian Basin to the east. Chances of finding more water closer clearly are in direct proportion to the amount of money spent on exploration.
Dr Childs says the replenishment rate of a bore increases with its depth as gravity directs to it the flow through the surrounding porous sandstone.
However, “mining” from the single borefield remains well above replenishment.
Cr Brown says this is not surprising: if there were more borefields, and they were being tapped in turn, those not in use would benefit from new water seeping through after rainfalls, and from the occasional flows of the huge rivers in the region.
He says only stepped-up exploration could provide vital data on water availability – and on the future and prosperity of Alice Springs.
PHOTO: Steve (right) and Jim Brown.

Note: The big Brown family for years sought permission to build a new suburb at White Gums but successive governments have blocked this because of water supply and sewage disposal issues. The “$250m project” has now been put on hold.

By ERWIN CHLANDA History was made in the Bungalow, now better known as the Overland Telegraph Station, as the place where taken-away children were interned,...
Read more