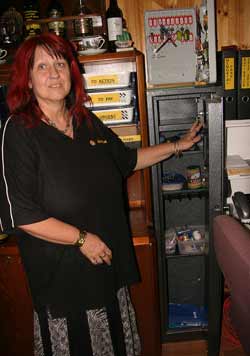 Police have arrested a man interstate after alleged safe crackers made off with “a large amount of cash” from the National Road Transport Hall of Fame in Alice Springs.
Several other suspects are still at large, police say.
The alleged burglars climbed the fence of the complex between 5pm on March 26 and 6.30am the following day, broke into the main building, and entered the shop and the office.
The manager of the hall, Liz Martin (pictured) says the offices had also been heavily vandalised and it had taken her and volunteers many days to clean up.
Meanwhile just before 3am on April 4 security personnel caught six youths in the act of breaking into the Gapview Hotel, stealing one carton of beer and four 1.25 litre bottles of rum.
And last Saturday a 17-year-old male punched two police officers several times who wanted to apprehend him for an alleged breach of bail.
The officers were treated in hospital for head injuries including abrasions and bruising. The youth was charged with two counts of assaulting police, resisting arrest and breach of bail.