Palm Valley gas flowing, but less of it 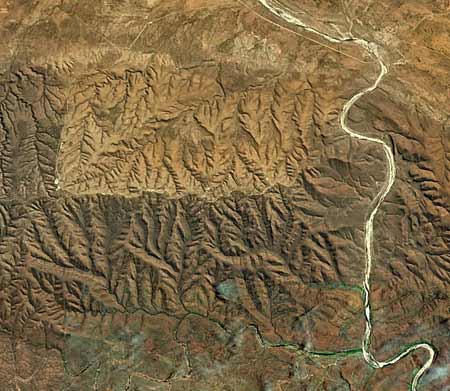 Natural gas production will continue in the Palm Valley field 145 kilometres west of Alice Springs under an agreement between Magellan and Santos.
Magellan has a contract with Santos for the supply of 22 Bcf (billion cubic feet) over 15 years.
This follows a swap last year which saw Santos becoming sole owner of the Mereenie oil and gas field west of Palm Valley, and Magellan of the Palm Valley field.
Magellan also owns the Dingo gas field south of Alice Springs, not yet developed.
The gas flow from Palm Valley is only about 15% of the production rate in its hey day.
It used to be 10 Bcf a year.
Gas production started in Palm Valley 28 years ago.
Magellan’s Merv Cowie says there will be no further drilling beyond the 11 existing wells at Palm Valley, the last one drilled in 2004.
The gas was being piped to Alice Springs and later to Darwin but a Power & Water contract ended last year.
Meanwhile Santos spokesman Tom Bradley says there are proved and probable gas and oil reserves at Mereenie “which should see the facility operating for many years to come”. He did not quantify the “proved” and “probable” reserves.
We asked Mr Bradley for what price Santos would sell Mereenie crude, which is of a high grade and needs little refining, to an oil refinery, should one be set up in Alice Springs.
Santos clashed with the owner of a refinery operating here in June, 2004. Fuel distilled from the region’s own oil resource has long been seen as a logical remedy for the massive fuel costs in The Centre.
Mr Bradley did not disclose a possible sale price for crude, saying: “On price, Mereenie crude does not comply to any specification for diesel so it would need to be processed and that is not something we do, so I can’t help you there.”
Meanwhile Richard Cottee, Managing Director of Central Petroleum Ltd, says the company today completed the farm-out transaction with Santos Limited in respect of most of the areas covered by their joint venture agreement covering more than 18.7 million acres in the Amadeus and Pedirka Basins.
“Santos is a strong and capable partner for our joint venture which brings a ‘step change’ to Central’s exploration and potential development activities”, says Mr Cottee.
“This marks the start of an exciting exploration phase in our Northern Territory acreage which we expect will see Central take full advantage of its vast holdings of high-potential oil and gas acreage.”
PHOTO above right: The Palm Valley gas field. Hermannsburg is at top right of the picture, the Finke River at right and the Palm Valley at the bottom.

UPDATE 5pm The girl has been found, is undergoing health checks but appears well. Acting Superintendent Michael Potts said due to the remote location, other details...
Read more