The work of healing hands


“This book is about our hands and our faces, that’s our work, our hands,” explained Pantjiti McKenzie, one of the nine ngangkari present on Monday at the Desert Knowledge precinct to launch a new book about Anangu healing traditions – the use of healing hands, healing breath, insight and lifelong experience to renew the health and happiness of sick people.

Almost all of the ngangkari present spoke of their work as lifelong – a gift with them from birth. It’s also 24/7: people ask for their help “night and day” and they go “with joy and generosity”, said Pantjiti McKenzie. The treatments are usually so effective that only one is required, she said, but a second treatment can be given if necessary or another ngangkari can be called upon to help.

It’s an ancient tradition Janet Inyika reminded the gathering. She was one of the NPY Women’s Council directors on hand to promote the book – the NPYWC are credited as authors. Before white people came, said Janet Inyika, it was the ngangkari who looked after the health of the whole nation – all the injuries, different sicknesses, emotional pain. She acknowledged change in the contemporary context: sometimes ngangkari can stop people from getting worse or prepare them for hospital, she said. And sickness arising from the use and abuse of alcohol, petrol and marijuana can be “problematic” for ngangkari.

Arnie Frank spoke of the special ability ngangkari have to see “right through someone”, to see what’s wrong. Their work can be very “subtle”; sometimes they don’t need to be present with the sick person, but can work on a spiritual level.

The tradition will continue, said Nyunmiti Burton, another NPYWC director: Andy Tjilari, her “big daddy” and the first ngangkari to be employed by NPY Women’s Council, is “getting on” but he, like them all, will pass on his gifts. Maybe in the future there’ll another book (a third on this subject) “with all the new ngangkari who haven’t been born yet”. 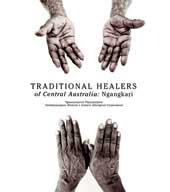 Andy Tjilari described how holistic the treatments are: not just the sick child is attended to, but “we also settle down the parents”, he said, so that “a happy family goes home”.

Margaret Smith, another director, told the story of her grandson who was very sick. He was flown to Flinders Hospital in Adelaide but Andy Tjilari also treated him as soon as he got back. Now he’s “as good as ever”, which she credits to “the old man’s healing”.

Several of the ngangkari spoke of their appreciation and pride in being employed by NPYWC to do this valuable work. It’s “more professional” said Naomi Kantjuriny, “doing healings in hospitals and clinics”. But even when she worked in a store, she continued her ngangkari work “after hours”.

A number of the speakers also thanked the translators for their work. The gathering could see one in action, Linda Rive, as most of the speakers were using their mother tongue, Pitjantjatjara. Fluent, expressive translation makes a great difference to an occasion like this as it does, of course, to the words on the page.

The work of Angela Lynch as the ngangkari program coordinator for NPYWV was acknowledged and the contribution of the late Mr Peter, Number One Ngankarai, was warmly evoked. He passed away just last year and book is dedicated to his memory.