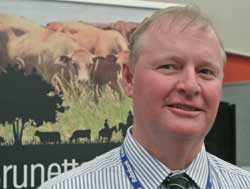 NT Cattlemen’s Association president David Warriner (pictured) told its 29th conference that it is “eerie, and frankly disturbing” to see how similar today’s situation is to that of nearly three decades ago: “Aboriginal Land Rights, BTEC, AMLC (now MLA) needing more money to finance the budget,” he said.
Then: “Herd numbers – we have hit 23.4 million cattle. The first increase since everyone got their fingers burnt in the 70’s. Shades of this period on the dusty horizon.”
Now: “Here we are with over 30 million head.”
Mr Warriner told the 350 delegates in Alice Springs this morning: “We certainly need to reposition all agricultural  industries in many ways.  Fifty years ago we were better off.  We had superior terms of trade creating real wealth to industry land owners and participants.
“We had better relationships with governments in that agriculture and food production was given a far better hearing than we receive today, and most importantly we had a much closer relationship and connection with our urban counterparts and consumers.”
Lost conection
He says the problem is that “the city, not us, who have lost the connection. Fifty years ago everybody had a natural rural connection of some sort.  That connection, is now broken.
“It has not been due to policy, but natural demographic trend.  I think the only way to a real and solid reconnection is through the education curriculum on a national basis.
“I know the National Farmers Federation are working on this.”
The cattle industry will need some “smart footwork” in the next couple of years to participate in the “food boom … cutting costs in hard times such as these is only a survival strategy and does not augur well [for] productivity increases and development of domestic and international market positions.
“Processors, value adders, traders, and exporters certainly will not pass profits down the chain if they don’t need to.
“With an impending dry time in front of us our leverage is diminished as we have limited options to hold supply back as we are forced to unload,” said Mr Warriner.
He said the NTCA is certainly performing above its weight: “At least we can honestly say we represent 90% of Northern Territory Cattlemen.  No state farmer organisation comes anywhere near this.”
Cycle of decline
However, a cycle of decline in other representative bodies “needs to be broken or our peak bodies Cattle Council of Australia (CCA) and National Farmers Federation (NFF) will end up like the grains industry peak council and collapse.
“CCA is the largest member of NFF and without that membership coming in NFF too could end up collapsing.
“In order to ensure we lock in the required investment to get North Australia moving again we need to have very strong relationships with governments, traditional owners, and the voting population.  Effective peak bodies are essential to this dialogue.
“Remembering that something like over 85% of the representative seats in the federal parliament are south of a line drawn from just north of Brisbane to just north of Perth, we certainly have some strong competition for funds from a broke government,” said Mr Warriner.
“Not only do these projects need funding, but land tenure and native title need to be dealt with effectively.
“The decision by the federal attorney general to discontinue native title respondent funding for pastoralists is one of those which beggars belief [ignoring] the good will and progress made in recent years.
“Land councils have even come out and called for reinstatement of our funding, a figure of $2.5m over two to three years for the Kimberley, NT and Qld.”
Bizarre issues
Some infrastructure issues are clearly bizarre: “Right now it is cheaper to get a container of hay from the Douglas Daly to Japan via Adelaide than Darwin, shipping being $2,400 cheaper, and Port and Bunker Adjustment Fees over $200 cheaper. The total is  $2,600 per container.
“As northern Australia is developed as it should be, we need to ensure that it is done properly and not in a half arsed manner like many public projects.  There will be no public support for infrastructure provided to a few at the cost of the majority.”
Is the region staring another drought in the face?
Said Mr Warriner: “At the time of writing it looks like the good times of the last few years are over, and the dry could be back.
“Almost all areas of the Top End have had record minimum monthly rains for January and February.
“The VRD and Barkly are well down on averages and plenty of cattle are being moved off as we speak.
“Areas of Alice Springs have had as little as four inches over the last 18 months, I have heard.  I am sure there are some with less as well.
“With what is now an almost non-existent Drought Policy of the Federal Government’s, I cannot see there will be any joy in terms of rebates and subsidies and so on this year.”
Cicero got it right
Mr Warriner closed by quoting pastoralist the first president’s report to the NTCA, delivered by Grant Heaslip in 1985: “Cicero, the great Roman statesman and lawyer of over 2000 years ago gave this advice to the government of the day: ‘The budget should be balanced, the Treasury should be refilled, the Public debt should be reduced, the arrogance of officialdom should be tempered and controlled and assistance to foreign lands should be reduced, less the State become bankrupt, the people should be forced to work and not to depend on the government for subsidies’.
“Cicero’s warning was ignored and the empire was crippled by taxes, currency debasement, welfare, bureaucracy, and arbitrary government.  It slid into dictatorship and final decay.  They said of Cicero: ‘At least he tried’.”