Serious harm to Basil Jurrah not in dispute 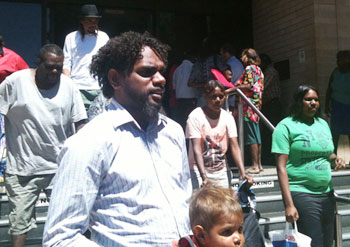 Also, glowing testimony of Liam Jurrah’s character on Day 7 of the trial

That Basil Jurrah sustained serious harm in an assault on him at Little Sisters camp on March 7 last year is not in dispute. Among the agreed facts read out to the jury this morning was an account of his injuries, including lacerations “down to the skull”, the largest of these being a 10 cm L-shaped laceration. There were eight external bodily injuries all up found when he was admitted to hospital in the early hours of March 8. A CT scan then revealed six fractures to the head and face. These injuries constitute “serious harm” within the meaning of the NT Criminal Code.

It was also agreed that “two male persons” have been dealt with by the courts in relation to the events at Little Sisters and further, that a boy aged 14 years suffered “serious head injuries” at the camp on the night and was admitted to hospital. (This boy was referred to by Liam Jurrah in his electronic record of interview with police as his “little nephew”.)

The court has heard this morning from three character witnesses for Liam Jurrah.

John Lewin, a commissioner for Fair Work Australia, is also the president of the Collingwood Industrial Magpies, an incorporated charity promoting achievement and enjoyment of Indigenous sporting activity. He has known Liam Jurrah for five to seven years, at first as a player for the Yuendumu Magpies and also in the Alice Springs town competition, as a player for Souths. Following Liam Jurrah’s listing with Collingwood in the Victorian Football League, he had “extensive” contact with him.

As might be expected, he could not fault Liam Jurrah: he has found him “very honourable” and “very serious”, carrying “some considerable responsibilities” as a Warlpiri man and as a member of the Yuendumu community. He said he is an “honest, open and forthcoming person”.

He spoke of the “significant adjustment” Liam Jurrah had to make when he first came to Melbourne as a football player. If he ever missed or was late for training, he was “open and honest” about the reasons why; these qualities were also apparent when it came to borrowing and returning money, Mr Lewin said.

He said he, his wife and children were happy to have Liam Jurrah in their home at all times. He knew him as someone who lived quietly, not going out with other players but rather spending time at home with his partner, and playing musical instruments, in short “a model citizen”.

Prosecutor Stephen Robson asked Mr Lewin if Liam Jurrah had ever consumed alcohol in his company. “No”, he said. Mr Robson wanted to get an idea of how many interactions he would have had with Liam Jurrah over the years. “About a dozen” before he moved to Melbourne, said Mr Lewin and once he was living in Melbourne and was with the Collingwood club, they became “frequent”. 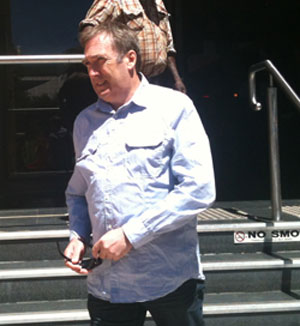 They were less frequent once he moved to the Melbourne Football Club but had not finished. He continued to see Liam Jurrah in the home of Bruce Hearn Mackinnon (at right), also a member of Collingwood Industrial Magpies and the author of the book, The Liam Jurrah Story, published in 2011 (that is, before the events that have led to Liam Jurrah standing trial). Mr Mackinnon has attended most of the trial and has been in frequent contact with Liam Jurrah’s legal representatives. He gave testimony this morning as to Liam Jurrah’s character.

He told the court that Liam had lived with him and his family when he first came to Melbourne and he knows him “intimately”. He described him as “one of the most inspiring people he has ever met” and particularly, “incredibly caring”. He spoke of his attention to Kwementyaye Watson, his longtime friend and brother in the traditional sense, who was dying of cancer. His dying wish was to see a Collingwood game, which Liam Jurrah had arranged.

Liam Campbell, a long time resident of Yuendumu, where he was initially employed as a youth worker, was a further character witness. Liam Jurrah was a lad of 10 or 11 when he first knew him. He was a good footballer and musician, a “quiet leader” who could be relied upon as a mentor for other young people.

Mr Robson asked Mr Campbell if he’d even known Liam Jurrah to drink alcohol: “Yes,” he said. Had he consumed alcohol with him? “Once,” he said.

Mr Robson has begun summing up for the prosecution, to be followed later this afternoon by Mr Tippett for the defence.