The trial of Liam Jurrah finished early today, after the playing of his record of interview with police was abandoned. The courtroom copy of the DVD appeared to be faulty and a new copy will be obtained over the weekend. 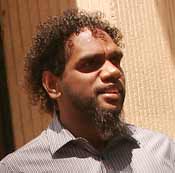 The interview was given while Liam Jurrah was under arrest on March 8 last year, a day after the events at Little Sisters camp. In the few minutes that were played in court, he appeared serious but calm. He had elected not to have anybody with him during the interview and had spoken to his legal representative beforehand.

At the time he was living in Melbourne, where he was playing for the Melbourne Football Club. Asked why he was in Alice Springs, he said that his family had had “a problem in the last couple of months”.

After only a few more minutes, jurors said they were having difficulty hearing what he was saying and the screening was abandoned.

Today’s last witness was Allan Collins, a resident of Hidden Valley town camp. He was suffering from pain in the right side of his face and the court broke twice to give him a rest.  He gave his evidence with the assistance of an interpreter.

On his side (he named at least six men), people had sticks and nulla nullas. The others walked fast towards them, throwing rocks and firesticks (from the campfire). He said he then ran away with Lemiah Woods (in his cross-examination he agreed Essau Marshall was also with him, whereas Mr Marshall in his evidence said he was alone). When he “pulled up” he could see Liam Jurrah and Christopher Walker hitting Basil Jurrah. There was some light, he said.

Hit with machete ‘many times’

He said Liam hit Basil with a machete “many times” on the head; Christopher Walker hit him on the knees and the nose. Then he said “Ronald Martin came running and laid on top of Basil”. This name has not been heard in evidence before. He said the assailants were still hitting Basil when the police arrived.

In his evidence in chief he said he had nothing to drink on the day. This was the first thing Jon Tippett QC challenged him on, putting to him his prior evidence at the committal hearing of a drinking session at Hidden Valley in which he took part, drinking three cans of VB. Mr Collins accepted this and said he was “not really drunk”. He said Basil Jurrah was drunk as was Essau Marshall who was “half shot”.

Mr Tippett also put to him that at the committal he had given evidence of Lemiah Woods having an axe. He agreed, contrary to his evidence in chief today, that he saw one, and “maybe” it was Lemiah who had it.

Although not as assertive a witness as Mr Marshall, Mr Collins remained steadfast, under Mr Tippett’s repeated challenges, in saying that as he ran away, he stopped and turned around and saw the attack on Basil Jurrah. In re-examination by prosecutor Stephen Robson he was asked if he had his back to Basil Jurrah all the time when he ran away. Again he said, “I turned around, I was not far.”