Liam Jurrah trial, Day 3, afternoon: Did he smash a car? 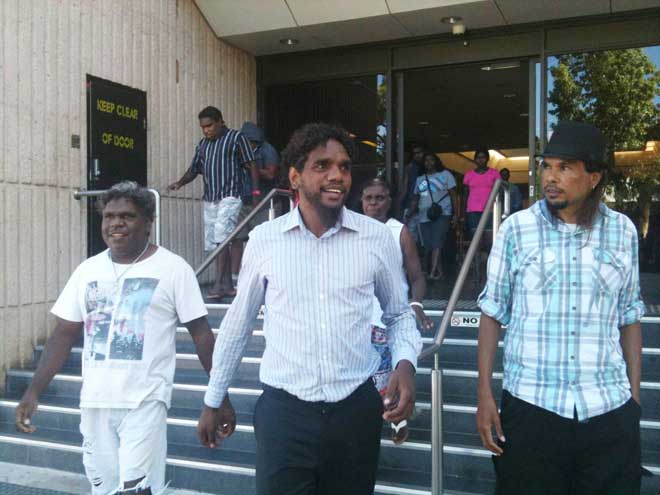 Relieved no doubt at the end of another long day in the dock, Liam Jurrah leaves

Chief Justice Trevor Riley told jurors to “put to one side” anything that they may hear reported about the fighting outside the courthouse today and to “concentrate” only on the evidence heard in the courtroom.

That evidence had included this morning an important admission by Ingrid White. Yesterday she had told the court that Liam Jurrah had hit her on the head with a nulla nulla, causing “a little cut”. Under cross-examination by Jon Tippet QC she agreed that this was “an accident”, as she told the police at the time.  It happened because she got in between Liam Jurrah and  Lemiah Woods who were arguing.

Mr Tippet also tried to explore the family feud with this witness, but like her mother, Freda Jurrah, she made it clear that she didn’t want to talk about it. She said her family members, like Murray Woods and Lemiah Woods, “weren’t involved with that problem”. He suggested she was involved, but she insisted: “We weren’t involved with that problem so I don’t want to talk about it.”

After lunch Lemiah Woods returned to the witness box for further cross-examination by Mr Tippet. He put to him that Liam Jurrah did not do anything to Lemiah’s father’s car. The court had heard yesterday from Lemiah Woods that Liam Jurrah and Dennis Nelson had smashed the car with an axe. He said “both” used an axe. Mr Tippet said that was the first time he had said that; he hadn’t told police; he didn’t mention it in his committal evidence. He suggested that it he hadn’t seen this, that it wasn’t true. Lemiah Woods looked uncomfortable but said, “I did see Liam smash that windscreen.”

This was also the focus of Mr Tippet’s cross-examination of Murray Woods, Lemiah’s father. He described Liam Jurrah as his “grandson” whom he’d known since his childhood. He said people from both feuding families are “part of my family too … I’m in the middle of them two families.”

Mr Woods put “a little axe” in the hands of Liam Jurrah and a “little iron bar” in the hands of both Josiah Fry and “Dennis Walker Junior” (it was not clear if he meant the same man as the “Dennis Nelson” mentioned by other witnesses). When asked who started hitting his windscreen, he said “Fry and Dennis.” Anyone else? “Those two,” he said. The prosecutor Stephen Robson returned to this later, asking did he see Liam Jurrah hit the windscreen. To this Mr Woods said “yes”. When Mr Tippet put it to him under cross-examination that Liam did not smash the car, he said: “He hit it once, to the windscreen.”

Mr Woods, a man perhaps in his sixties and whom the court heard suffers from diabetes and kidney disease requiring dialysis, also gave evidence of Liam Jurrah helping him on the night. He was hit in the back of the head, he didn’t know by whom, and was dizzy. He said Liam took him next door and sat him down in a chai: “He made sure I was alright.”

Final witness for the day, Samuel White, did not give any evidence that put a weapon in Liam Jurrah’s hand – “it was dark” – nor did he see him fighting, only arguing.

As the court adjourned, all was quiet outside. A few family groups were still on the lawns where TV journalists were choosing to do their pieces to camera. The mobile police van was parked nearby.