Another day in the bush on the grog 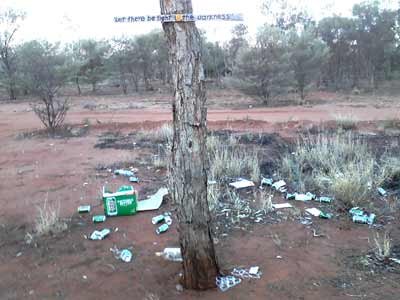 It’s 2am.  Can’t sleep, again.  Get up to find the stars quietly hanging in the sky.
Yesterday, I hosted a lunch with the Chronic Preventative Health worker from Alice Springs who’d come out bush to try and get some support for Indigenous people who are failing to take their medication for diabetes, obesity and hypertension as they move closer to dialysis.
One man and three women turned up along with four children, all girls. The man she principally sought and tried to get to the lunch was intoxicated by 11am.
I told her this was the way it had been for the past 18 months with this forty-five year old, talented, bi-lingual remote community man who’d had a stroke at that time.
When he paints, which is not often anymore, he paints the old cultural ways of hunting, but lives in modern chaos.  It’s a poignant observation, personally.
One of the women spent thirty fruitless minutes on the telephone to Centrelink trying to get some money put into her Basics Card access welfare account.  She did not succeed.  How else can she survive and contribute to the upkeep of the children?  There is no work for her.
The husband of one of the women (and their four kids) is hiding from a police warrant on two counts of DUI for failing to show at Ti Tree Magistrates Court recently.
I have tried to support him.  I found him crying in a forty-four gallon drum not so long ago over the death of a family member.  He has lost three to my knowledge in the past 18 months. Another family man in his early forties is in gaol now for domestic violence.  His fourth stretch on alcohol-related offences in the past five years.
Car loads of people loaded their individual six packs this morning. Police recently busted a bloke with 27kgs of marijuana hidden in a fuel tank. I have heard from the horse’s mouth that the BDR cut sales of alcohol and profits considerably.  It also sent a message that domestic violence is not acceptable and you will be put on the BDR if convicted.
There is nothing to do for a lot of these people except to drink most days. They’re alcoholics.  It is demoralizing to see this for the past five years with small improvements, i.e., one step forward and then two steps backwards and so on – a fatal quickstep that continues.
I’ve only been back four weeks after a prolonged Christmas break to mend my own health.  I am proving less effective as the years go on.   It’s a constant physical and emotional attack and no surprise to see a generation of middle-aged Aboriginal men being picked off, one by one through alcohol-related issues.
I feel like I’m in a war zone most of the time where the bullets come in beer cans and bottles of wine.  The young men think they’re bullet-proof in a culture which encourages them, but it destroys them too..
Late in the day, I saw the man who’d had a stroke driving on the back road. He would have gone DUI if the police found him on the nearby public road. His wife sat in the front seat nursing a VB.  They’re an intelligent couple, but they know they’re slipping down the slope fast.
“Do you think life is worth living?”  I asked him.
“That’s what I’m thinking. We losing family.”
“In the old days, them people would wake up with the birds talking to them,” I said.
“That’s what I had when I was a boy.”
A young man of about twenty sat in the back seat looking demoralized. Two older men were beside him.  I find it hard to look into the faces of some of the long-term young men and women drinkers, because they look at me as if I’ve failed in all that I’ve tried to do these past years.
And I know that they’re right.
There comes a point where you switch off and think about getting away while you can. Managing alcoholism is as much the issue as introducing an alcohol management plan (AMP), but without serious attention to supply restriction, including the interlocking roadhouse vortex, it’s going to leak big time.

PHOTO: A drinking camp in the bush near a “dry” community, not far from Alice Springs. The sign nailed to the tree says: “Let there be light in the darkness.”

Top cop lashes out on “brazen and cowardly conduct”

COMMENT by ERWIN CHLANDA Facebook’s sudden shutdown of its Australian news content should be a wake-up call for all who have come to rely on...
Read more
Issue 4

A croc with an Alice heart

By JULIUS DENNIS Sally Balfour says her first go at recording children’s music, Clara Crocodile, which will be released on March 3, has got “an...
Read more