Home Issue 3 Sick of waiting for a music scene, they made one
Issue 3Issue 4Volume 20

Sick of waiting for a music scene, they made one 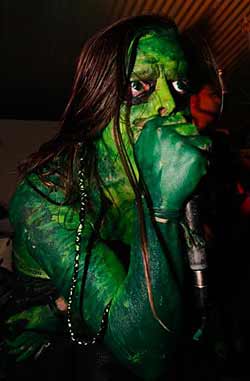 February 2011, Alice Springs.
A long haired man wandered through a desert wonderland. He heard the colour of the red dirt and saw the sound of the wind blowing it against his 15 year old jeans. He had grown tired of the mundane day to day, and was about to embark on a musical journey which would define himself, and his home.
Three months pass, we find ourselves and our fearless hero at Annie’s Place. There are five separate video cameras circulating the venue. We see him, above the crowd, hanging from the roof. His body covered in fluorescent green paint, a haunting white mask conceals his face as he melts the mind of  punters in the front row with his deep blood curdling squeals and groans.
“This is the official launch of The Black Wreath!” he screams. “We are broadcasting this gig as a live stream in music venues around Australia.” A deafening applause fills the air, followed by the now entranced front row chanting: “Alice Springs! Alice Springs! Alice Springs!”
This is The Black Wreath; a collective of musicians lead by local identity, Pirate from Alice Springs, NT. There is 13 of them to be exact. The Black Wreath is made up of local bands: Uncreation, Miazma, The Horror, Exdemission and South East Desert Metal. A group of young fellas who were sick of waiting around for a music scene. So much so that they decided to make one.
They began in true rock and roll fashion by asking one of the fella’s parents if they could “rent out” a spare rooms at their home. The following month consisted of hammers and nails, as opposed to getting hammered, then nailed. The boys built their own custom recording studio, complete with drink holders and red velvet walls, and as soon as the studio was built the first The Black Wreath EP was released. This was all in a space of three months.
2013 is going to be the biggest year so far for The Black Wreath. March 30 will be the first ever “Blacken Festival”, which is being headlined by Melbourne band “King Parrot”. Wreath affiliate band Miazma are about to release their debut album “Bacteria of this Earth” with a national tour this year. Exdemission have released an EP, Uncreation are recording and The Horror are about to release an album. Recently, local indigenous band “South East Desert Metal” have been signed to The Wreath and have recorded their EP at the studio. I also recorded my debut EP “I’m Only Hugh, Man …”  there. The Black Wreath is an institution for local independent artists.
The 15 year old jeans I mentioned earlier that Pirate wears daily, are a testament towards the dedication he has to the Alice Springs music scene. The past few years of The Black Wreath have been intense, the prolific work rate and plans being made are amazing and all the hard work is now paying off. The Black Wreath decided that our remote location wouldn’t be a hindrance towards our music careers, they decided they would make it an advantage. 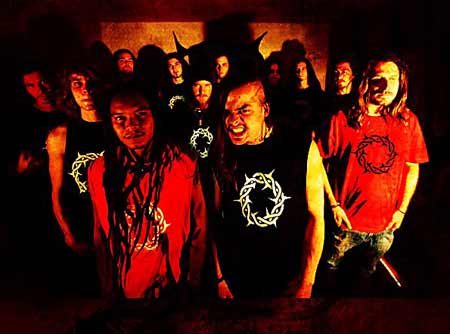 This is Central Australian music, where Hip Hop and Heavy Metal work together side by side, where studios are built with scrap metal and Pirates sail the red sand sea. This is The Black Wreath.
See Miazma at their debut album launch at Todd Tavern, on Saturday March 9. Supported by The Horror, and myself SkankMC.
Blacken Festival: March 30th at the RSL, Alice Springs.
Uncreation, SkankMC: Wide Open Space Festival, 3-5 May
PHOTOS: Top & centre: band members of The Horror, Miazma and Uncreation. Centre left: Pirate.

Top cop lashes out on “brazen and cowardly conduct”

COMMENT by ERWIN CHLANDA Facebook’s sudden shutdown of its Australian news content should be a wake-up call for all who have come to rely on...
Read more
Issue 4

A croc with an Alice heart

By JULIUS DENNIS Sally Balfour says her first go at recording children’s music, Clara Crocodile, which will be released on March 3, has got “an...
Read more